I want to explain the difference between passive and active game objects. What they are and when to use them. This is in my mind quite some time. I hope I can express it in an understandable way.

This thread discusses Game Objects only (it does not discuss the interaction to Physics, Rendering or other parts of the BGE).

What is an Active Game Object?

An Active Game Object processes the logic of a feature on itself. It extracts data from itself and it modifies its own states. It behaves as a Single Object.

What is a Passive Game Object? 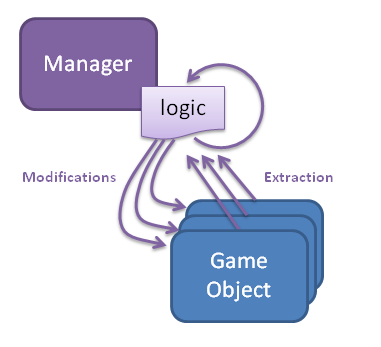 Can a game object be active and passive? If both processes perform the same logic this situation creates a conflict. It is strongly advised to avoid such conflicts as it easily leads to unpredictable results.
Therefore it is important to decide early if active or passive processing is used.

If active and passive logic perform different tasks the logic is independent from each other (separation of concerns). If seen separately the object will be active for one processing and passive for the other processing .

When to use what?
This is a difficult decision and strongly depends on the situation.

Nice to know. I like your presentations, Monster. They’re professional and informative. I should try to think ahead when I implement game objects, and consider both types before I define their AI.

AI is a good example too.

and good things to know.

This reminds me of how much easier logic/programming becomes if you create a flowchart.

Thanks and great explaination monster, its quite hard to undersntand the whole concept to me, but I think that I got what you ment!

Great stuff as always Monster! This reassured me in the use of passive logic.

Yeah , a manager always helps a lot . I use it in my games and I like it because of how easy it is to tweak things if needed.

Thanks again, Monster! Learned!
Please continue writing more of these stuffs …and also pdfs…(I’m so greedy:p)

As you all find this useful, I move it to the resource section… done.

It is linked from my guides page already ;).

i recently get trhouble in a situation similar that you say “dangerous” mix active/passive (in fact) .

basically there 2 NPCs (obj active) then one a certain point attack the other , and should start a syncronizated action.
since have a action managed physically (from bullet) is impossible.
in this case i guess the the best way is make one obj decisely passive while the other still active (the attacker)
anyway again i not found the good way to give the order without “owerride” (the obj active write inside the code of other obj and make it passive)
now try with something as “messages” but is a thing never used before, anyway should be less “invasive”

Have them both use a sequencer ?

and then have a logic for loop like the .blend below to handle there actions?
(note that the action is set to property mode)
So the animations WILL not advance unless the property does

So the attacker needs

otherwise he controlls his own animations,

yes i have done something similar (but not use more frame property not recall well, if is broken or what other)

you use physics, and you can keep all object “active” , not there conflict
since bullet do the work for you

with two character is not possible and give some dependences.

anyway i use a property “occuped”

(that is a evolution of simple parent),
when is True other characters cannot attack.

and work perfectly , my bad was keep both obj “half active”, but as say Monster it give conflict
anything easy to manage.

better a abrupt separation of task , not much realistic but much more easy.

With two NPCs I suggest to use a “notify” method as you already suggest.

The notification can be:

The listeners are listening to:

This way they can trigger their controllers at the same frame (active object).
Using messages is pretty save as long as not involved listeners can deal with unnecessary notification.

I hope this is somehow understandable.