After using the popular Add-on Windows Generator 2 created by SayProduction, I have decided to add some features.

Now, you can modify the parameters of the windows after creation, so you can make small tweaks without need to recreate the window or select other objects, rotate, translate and back later to change something.

Besides, the materials are for Cycles because the original script was created before Cycles existed.

Great work Antonioya! Tryed it out for a little bit - a quantum leap for arch workflow

Wow, it became more and more useful!
Thank you.

I did not changed anything in the windows calculation, but I will see if I can fix it.

To install this script for later re-use I did the following.
Download script and open in a text editor - Notepad or whatever
Save file in Blender directory under 2.68/python/lib directory inside blender- I saved it as add_Window.py
open blender
open user preferences
Goto add-on tab
at the bottom of the add-on tab look for “install-from-file” button
This brings up a file browser and you have to find your way to your blender install directory /python/lib
select the add_Window.py file
When you have the file selected hit the install from file button in the top right corner.
Now type window in the search bar at the top left of the add-ons it should list the add-on in the main window. make sure you enable the add-on here.
Then hit the save user settings button in the bottom left corner.

please forget my question above.

This is fantastic. I have just recently started using Blender again and have been working on a few old scripts. Found that they had been “bundled” with other scripts, including a window generator from “SayPRODUCTIONS”. I don’t see any reason to continue that old script when something this well done exists.

My question being, should I just reference this in documentation for package or are there plans to add this to a “bundle/package” for architectural objects?

P.S. I did look at “Archimesh” and thought that was better than what I was doing so perhaps a cooperative effort, or I just watch and wait for this all to replace what I’m doing.

Similar to what I did with “Balcony” so would like to discuss including/merging with “add_mesh_building_basics”. To be clear, what you have done is fantastic and I would like to apply much of your work and operations to other objects in the package or work out how to let others know about the suite of architectural features available.

P.S. I did look at “Archimesh” and thought that was better than what I was doing so perhaps a cooperative effort, or I just watch and wait for this all to replace what I’m doing.

I would back some more joint-ventures. Data mess (including useful blender addons either mixed in random repositories or even lost without versioning) is a huge pitfall. So yes, please bundle these addons consistently.
The realtime/at a later point update also could not do harm to other addons. Have seen it with add_dimension.py by Spivak too.

It’d be nice if we could get all this chaos ordered, it might therefore be nice to follow some criteria, maybe:

Currently there are material related addons that show high code redundancy like online material library and all the other material and node “packs” and addons.
Or the mesh check/lint/visualization whatever works.

I’m on third revision of basic script I started a long time ago for “column” - fixed that, found out it was part of a “collection”, then found several other versions that do same thing but not all consistent (to say the least). Would be nice to have categorization by “type”, maybe later after I finish round four of “architectural” package.

Main issues right now are “standardization”, so the features/operations/UI are reliable and reasonably consistent. That includes bug fixes, which I’ve found plenty to correct in my own code after working with other modules so all is good. WIP

downloaded the .zip from github, and Windows 7 says it’s an invalid .zip file. Tried making my own .zip with text copied from source (init.py, window_panel.py, window_tools.py) and those still won’t install (add from file) in Blender 2.74. Any suggestions? Thanks for your work!

You light my Saturday morning with this great add-on!
but I have made two modifications: like others -> Jamb Generator 2 or Chimney Generator or Prokitektura

A great congratulations Antonioya and Thanks of my core!

EDIT: Do you have thought to the Andrew’s question about rotation or symetry of windows, please?

Answer: I have made a simple s=-1 and aply scale and not problem! GOOD.

EDIT 2: Could you say me how you transform a parametric object in normal objet, please? Or How you “mesh_bake” your window, please?

it’s this line: (For what do you have create?)

Installs and works fine in 2.73, I get the following error message when attempting to enable in 2.75a: 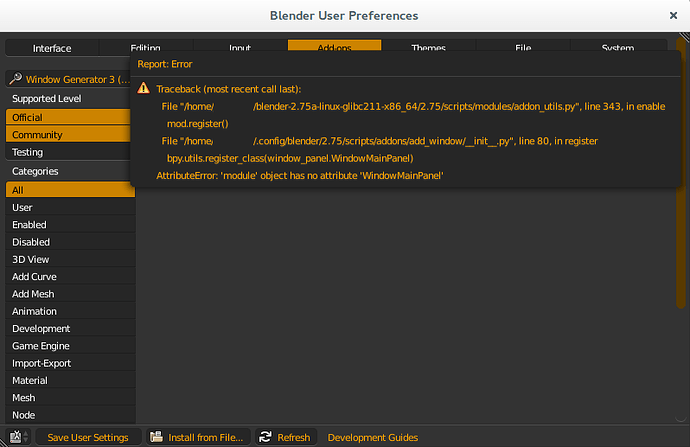 Wow!
A quick option to make a window - thank you, @Antonioya

Antoniya: Is thist the same basic windows making addon that is included with Archimesh 1.1. I do not want to install duplicate things.

Antoniya: Is thist the same basic windows making addon that is included with Archimesh 1.1. I do not want to install duplicate things.

I think this addon is included with Archimesh 1.1 now, according to the script’s download page:

** This script is deprecated now. The new versions will be integrated in Archimesh.

Hi Antonio, very nice work this is such a gift to the community, thanks:)

Recently I downloaded a very good and fast material for “glass facade” from blendswap by user Alphisto that was released as CC0.

It would be really great if you included this as your default glass material for this addon. It’s here: http://www.blendswap.com/blends/view/73095