Addition that I think will make geomertry nodes even more useful

It would help to make modeling in Blender almost fully procedural if there was an edit node like in Houdini. Where you make an edit and it saves that state of the mesh in an edit node that you can go back to, similar to 3DS Max edit poly modifier. I have been wanting to see something like this in Blender for a long time now and this would be so nice to have.

I agree with you.
Some of us have been pushing for a total “conversion” of edit mode to geometry nodes, something that would create nodes in the background when the user executes an edit mode operator. However that’s really not the developers’ priority, and my opinion is that something like this (akin to Houdini) will never land. Procedural modeling is planned (some time after the scattering goals are met for Sprite Fright), but I would be surprised if it’s connected in any way to edit mode. Let’s see.

Okay that’s good that they have plans for procedural modeling. Even if it’s not like Houdini’s edit node, something closer to 3Ds max edit poly modifier would make modeling even better.

Actually, I never understood why that option was never present as a modifier. I know we have some modifiers that give us some level of control over the mesh but nothing to allow us to edit the mesh itself in a non destructive way.

I expect that the developers look on that direction from now on, cause I think they always had the possibility to create something similar through the modifiers but I believe they did not care much for that.

I made a feature request on RCS for an edit mode modifier and got downvoted & banned from posting because of my negative rep. True story…

You’ve got my vote though.

If it were simple to make, it would already be a thing. I suspect that’s extremely challenging given Blender was not built for that in the first place.

That I cannot say, but since you have multiresolution modifier that can manage something similar but for sculpt, I don’t see why it is so difficult.

But I really have no idea about how simple or challenging it would be.

Things always look simple from the outside…

I bet coding Blender is extremely difficult and time consuming, but shape keys are similar to an edit mode modifier. Anyways, just saying it’s possible to make an edit mode node/modifier. It’s really a matter of whether everyone thinks it’s worth the time and effort or if Blender has bigger priorities.

Sorry for the double post. I don’t know why it did that…

My guess is that whatever does not changes the object’s topology is significantly simpler -such as multires or shapekeys, which basically store deltas on vertices. Take it with a grain of salt because I’m no developer, but I think Blender’s edit mode is very much non-generic -I reckon edit mode and the modifier list are two different systems that were designed to be lined up so that modifier evaluation happens always on top of the edit mesh (as it does), and I’m not sure it really makes sense to talk about edit mesh inside a modifier. I wanna be honest though, those are mostly educated guesses from reading technical discussions, so it’s probably quite a lacunary view.

Design-wise this also poses quite a few questions. Since we have no way of specifying components for modifiers to operate on except with dedicated data layers (creases, bevel weight, etc), how do we deal with changing geometry when the first modifiers in the list are changed ? Inevitably the changes propagate throughout the modifier list, just as it happens in 3dsmax with the modifier stack, and the results can be unpredictable. For instance, using edit poly to delete or extrude a few faces, then returning to your primitive and changing the number of segments/subdivisions will completely change the outcome because components are referred to by id, not procedurally (ie by position or another method).
What about specifying components that were generated by a modifier ? William’s mockups for generative modeling nodes solve this by making every node output attributes for its generated/modified geometry, and theoretically we could have that in modifiers but that would require updating each of them.

This is the official forum/thread where developers read the messages: 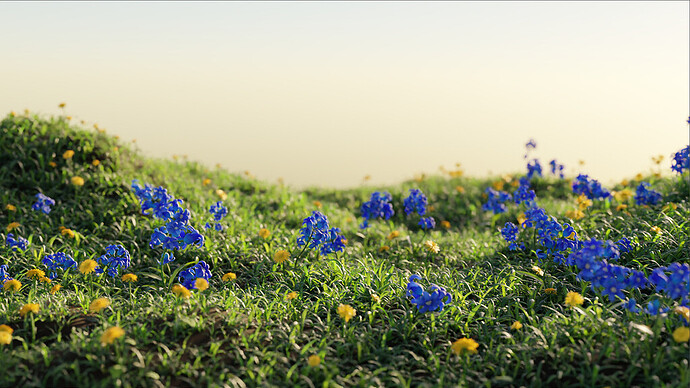 The nodes modifier project is the first part of the Everything Nodes Project, and it has officially started in October 2020. You can read more about it in the development blog. The initial focus of the team is to support the features required by...

You can suggest little things there, but it’s really more for feature feedback rather than feature requests.

I’ve been poking around in Blender for a long time trying to find something similar and there are solutions that are pretty close to an edit poly modifier. It might be due to how Blenders edit system is setup that it ends up being more of a save state modifier, but even then it would be extremely helpful.

The closest thing to it right now is the new keymesh addon. The only drawback is it’s on your animation timeline so if you want to have multiple meshes saved at different keyframes, you need to make a new scene with a new timeline and then you can freeze it down and add it to the main scene. Another way is to save out alembic files and load them into the MeshSquerneceCache modifier. That way is impractical but more of a proof of concept that some sort of edit poly, save state, or procedural modeling modifier is closer to reality but just needs to be worked out with enough attention and interest given to the creation of procedural modeling.

I think keymesh makes a completely independent copy of your mesh, but I could be mistaken. By this I mean edits on the bash mesh will not propagate to the “keymeshes”.

As a developer, I have sometimes wondered how one could add this oft-requested feature. But I always soon get stuck on the kinds of questions Hadriscus raised: how do you record edits in a way that isn’t invalidated when things earlier in the stack are changed?

You don’t. It’s totally fine for them to be invalidated. Maybe with a warning when attempting to modify source state (which is what Max does), or even silently (which is yucky and what Maya does). Also there can be ways to minimize, if not remove, dependencies on concrete source topology, e.g. procedural selection.

What about cases where one disables the effect of modifiers earlier in the stack? Should it just fail (silently, or with a warning ) when you do that too?

What about cases where one disables the effect of modifiers earlier in the stack? Should it just fail (silently, or with a warning ) when you do that too?

3ds Max has a warning with a “dont show this warning again” button. The first thing you do after installing Max is pressing this button.
Users know that going back in the stack or changing something in the stack can turn the mesh into spaghetti. It’s ok. People just have to know that this can happen.
But often changing something is fine and gives the user the desired result.

I find it interesting, and a guess a testament to how desired this feature is that people are happy with what to me feels like a hacky and broken implementation that pretty much destroys most of the point of a non-destructive modifier workflow (except in cases where the only changes you want to make earlier in the stack are vertex moves).

I contrast this to the furor over the “non destructive extrude” where the majority of users seemed to be saying that a hacky and broken implementation wasn’t worth having, even if it added value sometimes.

It does not destroy, it enhances your modeling workflow by obviating the need for clutter duplicates, minimizing reliance on undo (which is limited and often unrecoverable anyway), and enabling new non-destructive features. The point is not to be 100% procedural and non-destructive. It’s to minimize boilerplate (just like what us programmers want with code as well).
The fail path is rare - users that know what they’re doing will know what they can get away with.