it has been more than a year since I announced the last version of BitWrk, the Bitcoin-fueled peer-to-peer rendering service. Although my work and personal life have played some role in the delay, I still managed to put a significant amount of time into the upcoming version which is nearing completion.

If you don’t know BitWrk yet, here is a short demo video:

BitWrk 0.6.0 concentrates on delivering what the Blender community asked for:

BitWrk is, to my knowledge, the only rendering service that integrates into Blender as a render add-on. It is also one of the few distributed rendering solutions that support single-frame tiled rendering.

Your help testing this pre-release is greatly appreciated. I provide FREE rendering as compensation. Currently, there are two servers, but I will deploy more based on demand. Please make these servers melt!

How to get the free rendering? Just bid “BTC 0” for each tile (see video). No registration needed at all!
Download for Mac & Windows | BitWrk Home Page

Please give BitWrk a try and leave comments, thanks! Also, feel free to discuss BitWrk or ask questions. I will gladly answer and give support.

I hope you have fun with this release. The BitWrk servers are providing FREE rendering for you 24/7. Make them glow in the dark!

As always, comments, questions and criticism are very welcome! I would especially like feedback on whether LAN rendering works for you (started from Blender UI, not on the command line).

There is also, for the first time, a Linux binary available for download, built on Debian Linux.

A big THANK YOU to all who help making BitWrk better with each release!

First off, thanks a million for sharing indyjo

I just tried rendering but I get this in the Console:

Needless to say, it is not rendering.
What next?

Sorry, I haven’t seen this behavior before. I can only speculate.

Judging from Google, this looks like messages from the SSH tool. BitWrk doesn’t use SSH at all.

Could it be that there is some port forwarding going on? Like Port 8081 being forwarded to another computer?

This is a great little thing you got going here. I installed it out of curiosity and it worked nicely with a few quick test scenes. It’s so easy setup and I like really like the idea of having it a marketplace that computers can be used to render for bitcoins. Nice little way of earning bitcoins other than mining.

How has development gone so far? Are you looking to expand into the marketplace idea anytime soon? I noticed in a few places when running the localhost UI that some things haven’t been fully implemented. Is it possible to attach bitcoin wallets yet? I tried to but got a “server 500” error.

The interface for the localhost webserver could do with a little tidy-up, but the actual system development is more important at the moment. I added some textures and they seemed to upload and render correctly.

Thanks for the nice feedback! integration into Blender is supposed to be BitWrk’s main selling point.

The current state of Bitcoin integration is that it is possible to deposit Bitcoin on BitWrk, but you can’t withdraw it other than by asking me to do it manually (which I will gladly do!). When you got a 500 error you probably observed a downtime. I actually don’t focus very much on Bitcoin at the moment, other than keeping the infrastructure running.

My feeling is that before BitWrk can take off, it needs to get better at rendering bigger scenes. Unfortunately I can’t just throw more servers at it because that also increases the amount of scene data to be transferred up front. I am trying to resolve this issue and make data transfer to multiple servers more efficient. When that works I’ll encourage more people to put their computers on BitWrk as sellers and start focusing on the market aspects. 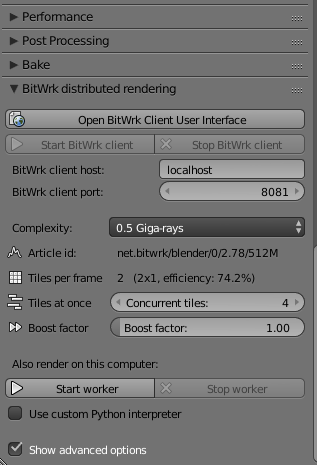 i cant seem to find the place to load the client

Looks like there is already a BitWrk client running on port 8081. Apparently it wasn’t started by this Blender instance, so the “Stop BitWrk client” is grayed out.