There appears to be bug in the Blembic importer and newer versions can not import Blembic files exported from 3ds Max. I will fix this as soon as possible but until then here is an older versoin of Blembic which is able to import cache files from 3ds Max:

I started to write an exporter for Houdini and updated the importer.
The Houdini exporter so far supports.

The importer has been updated and you can now:
- turn objects on and off in the viewport

A big thank you to Tiaan, Gerbrand and Mandrake for the help

I created a documentation of the Blembic file format on my web site. If you are interested in writing an exporter for another program this site explains how to set it up.
http://polykraft.de/wordpress/category/scripts/

Original post
Hi,
Blembic is an Addon which allows Blender to stream mesh caches exported from other 3D programs. I wrote it to bridge the gap until Blender has Alembic support, hence the silly name.
It uses itï¿½s own binary format (.BBC) so it is faster than streaming files like obj or fbx caches.
This Addon is still in development so you probably want to be careful when using it in production.

Here is a video of a Particlesystem I made in 3ds Max, exported to Blembic cache and streamed into Blender.
Note: What you see is one single object that changes its mesh each frame.

It is pretty fast and uses very little ram even for objects with a very large vertex count.

I also wrote an exporter for 3ds Max and Houdini.

Note that the 3ds Max exporter can be rather slow for more complex objects. I have some ideas to improve that in the future.

Exporting 3ds Max
The exporter doesnï¿½t have many options and is easy to understand:

- There is a Houdini file included in the download.- A sticky note in the file has some more information 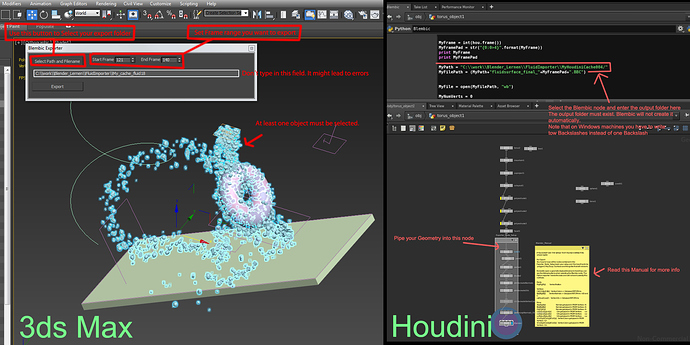 Adding Materials
Due to the nature of how materials are saved in Blender materials require a short workaround. 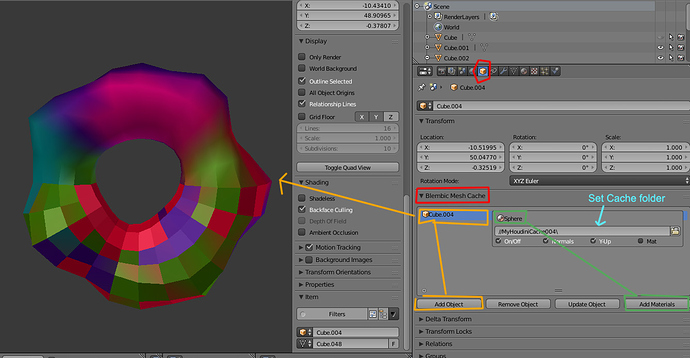 There are several checkboxes in the importer. These checkboxes turn certain things on and off so you can increase the speed if you are currently not working with a certain Blembic object. Note that these changes are visible only after changin the timeline.

oh man this is great, can you write an exporter for maya, to improve the maya blender pipeline?

+1, I would like to work with maya or directly with Guerilla.

I will try to look into a Maya exporter but I don´t have Maya so that might be difficult.
The further plan is to first complete the importer (Vertex colors are esspecailly important to me) and then document the .BBC format. It shouldn´t be very difficult to write a Maya exporter if you know what to write to the file, if you know some Maya scripting and know your way around May it should be pretty easy to write such an exporter.

However, I´ll be traveling for the next 4 weeks, so I´ll start the improvements then.

Instead of that, why haven’t you tried to develop an Alembic importer? you clearly have the knowledge.

That way you don’t need to handle any exporter from any package.

Anyway I need it to be Alembic because we already have material and we use various sources (clients sending us files and such things) so we need something that is crosspackage, and Alembic is that tool right now, but thanks for the idea

Thanks for the info to everyone, I hope this gets implemented as fast as possible, without it we cannot have proper interop and a proper pipeline to work with other packages from clients and ourselves.

I would love to but I am just a 3D artist with some Python knowledge and I am quite certain that implementing Alembic requires more than Python.

Hello! Great work, this saved my day, the only problem I got is that I cant assign a material to my Blembic, I followed your guide, but it dont change

This looks great! Any chance we can go the other way? Blender into Max?

Hello! Great work, this saved my day, the only problem I got is that I cant assign a material to my Blembic, I followed your guide, but it dont change

Hmm… does your object in Max have the same amount of MatIDs as it has Materials? Sometimes in Max you assign a material to an object while the object has several matlDs and the material will be assigned to all of these IDs. Maybe this causes the problem.
So perhaps for testing purposes create a cube in max turn it into an editable poly, select all polygons and give them the matID 1. Then export it to Blembic.
You can also upload the file and I will take a look at it when I return from vacation in a week.

This looks great! Any chance we can go the other way? Blender into Max?

Perhaps in the long run but at the moment the features listed in the opening post have priority for me.
One of the first things I want to do is document the file so that other people might be able to create importers and exporters from and to other programs.

Any chance to see exporter for Cinema 4D?

I don´t have C4D so this would be rather difficult. But perhaps when the format is documented someone who has it can create such an exporter.

The documentation for the Blembic format is online:

I have also started to script an exporter for Houdini.

Started writing a Houdini Exporter and updated the Importer. See the first post in this thread for the updates from the 14th of March 2016.

The mesh doesn’t show up. I make everything as in description. But it load something, but nothing is in scene. Because frames where objects are, for example from 0-50 frame, playback max 10FPS, but nothing show up, and nothing is there.

Hi,
it appears that I introduced some bug into the script for meshes exported from 3ds Max.
I will try to fix this as soon as possible.
I uploaded an older version that should be able to read Blembic files exported from Max.