Its under heavy developing right now. Very soon l’m going to make a first sneak peak of what this system will be capable of.

Eh, if movies have taught us anything it is that when haters won’t stop running their mouths you gotta blow them up! 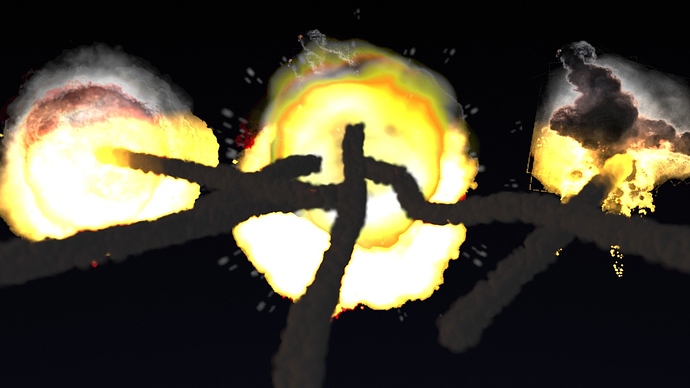 Blendgraph now supports a full multi-missile launch generator. Each missile travels down a randomly generated path and when it reaches the end a billboard explosion animation is displayed along with a lamp that grows and fades in intensity over the explosion lifetime.

Missiles are launched from the faces of a source mesh to the faces of a target mesh over time. An empty travels along each missile path and dupligroups any objects in the group at the position of the Empty. When the Empty reaches the end of the path it’s hide_render flag is automatically animated to remove the missile object from the scene after it reaches the target face.

Place holder Blender Internal materials are created for you upon generation. If you tweak a material or texture and regenerate you will lose your changes unless you rename your tweaked material or texture to a new name. The Missiles Node uses a naming convention for assigning all the materials to a node. It also instances the materials where appropriate. So all missile trails use the same exact material.

Here are a couple of explosion sequences that work with the Missiles Node.

browse, Texture: Fireball Sequence - This is a 90 frame 512x512 PNG sequence with alpha channel of a fireball explosion.

browse, Texture: Fireblast with Smoke - A 260 frame image sequence for a fireblast followed by smoke. 640x640 PNG sequence with alpha. 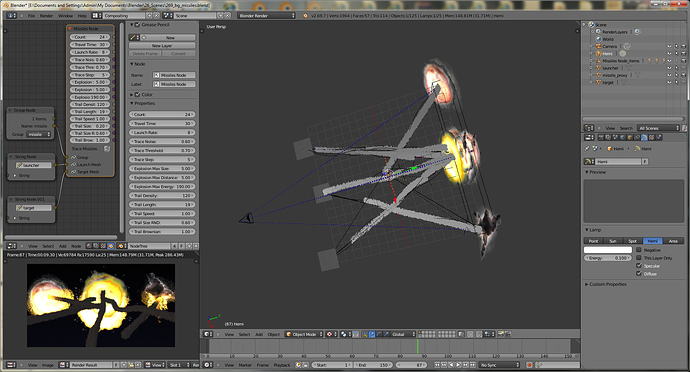 What do you mean - “haters”? I’m actually trying to help you, by pointing out pretty obvious lacks in your system. You dont even need to be a GUI designer to see these. Well, if you developing it for your personal use and you dont care about user feedback, then keep it up in your way. Best of luck

What do you mean - “haters”? I’m actually trying to help you, by pointing out pretty obvious lacks in your system. You dont even need to be a GUI designer to see these. Well, if you developing it for your personal use and you dont care about user feedback, then keep it up in your way. Best of luck

@Sergusster If I might explain something, not sure if you are a native English speaker, but the tone of your comments have been less than friendly (I’m thinking you are Russian or German). Saying things like, “Your system has a very VERY VERY poor design” with caps and bold, you appear to be rude, hostile even. Then you follow that with another, “how the hell in the world would one figure out that “String” node could…” you sound angry. There’s more, but I hope you get the point.

What you might think is logical and matter of fact, is coming across as disrespectful.

Sorry then, did not mean to disrespect at all. Really. Looks like even those cute smiley faces didn’t helped

As I said before, I’m a developer also, so i know how much effort it takes to create a system like this (a lot :)) So, what i was trying to say is that Atom is very tallented programmer and his researches combinet with nice userfriendly design would create a competetive, commercial-ready product.

Hmm I wonder if you could animste some lightning with this node. Probably the wrong noise type.

This addon is looking really promising. I haven’t spent any time using it but can’t wait until I do. This will make motion graphics a treat to work on. Do you have a list of nodes you are looking to implement, or are you doing it on a case by case basis?

Here is a port of the Torus Knot curve. The code was taken from the existing Toolshelf AddOn that ships with Blender. The benefit of generating the Torus Knot from the node, however, is that the parameters can now be animated. This node shows how to generate a curve on-the-fly and link it to the scene. 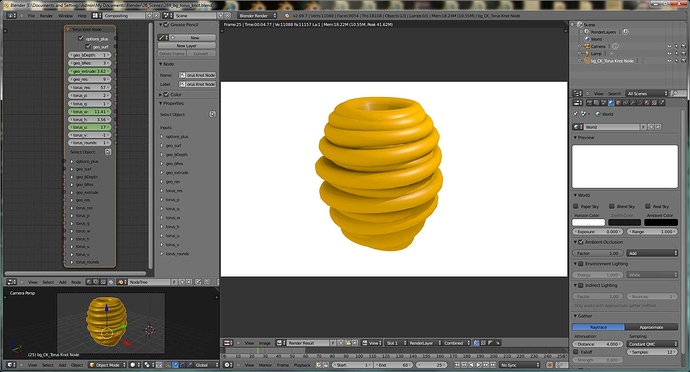 Usage:
Download and install the Blendgraph AddOn date 01/08/2014 or better, from Post #1.
Download and open the attached BLEND file to see the result of the Torus Knot Node.

It this me, or does the font repeater replaces all white spaces with “underscores” using last version of addon ?
Thanks

Humm my mistake :D. it does not appear when rendering !!

The underscore “trick” is left over from RE:Phrase. Basically there is an internal API bug about calculating the width of a space character so to avoid that bug (which I reported) I just set all space characters to an underscore with hide_render set to True.

Excellent work Atom, this is how all the tools should be implemented, with the interactive counterparts as a complement.

Here is something I just noodled up in Blendgraph. A Telescopic Cylinder.

The length of each Parametric Beam object is run through a Simple Math node in Add mode to increase the length. Animate the length and stretch for telescopic action. 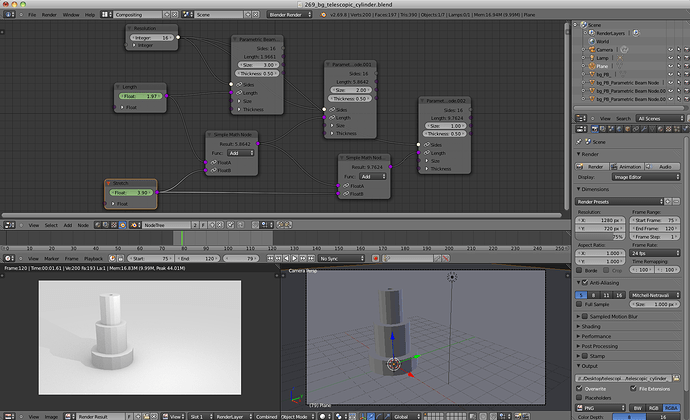 Hi!
very nice addon, but when enable this crash my latest blender 2.69.8 from daily builds page

That is odd, I just pulled down the 64 bit buildbot version for OSX yesterday to create the telescopic cylinder and it worked fine. Did Blender crash or did you see some message about Blendgraph crashing?

this is very cool atom

Here is blend file of Blendgraph combined with Sverchok. but you have to press get button and update button in sverchok to get it working.
To run this you may need to install latest sverchok from git. 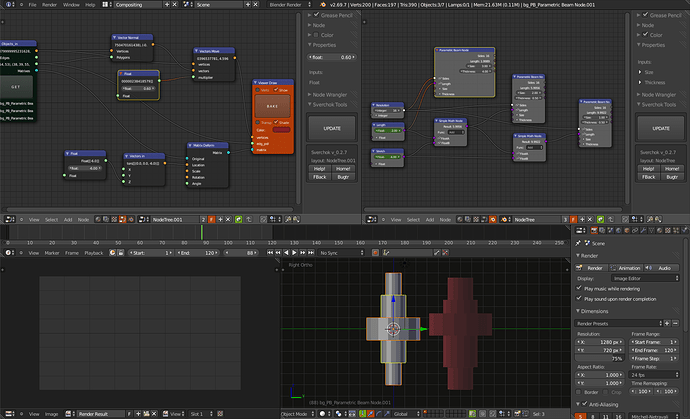 I have ported the Meshfoot core code into a single node with a slight change. Using the Meshfoot script you had to “PreLoad” a mesh sequence into memory to make use of it. The node version of Meshfoot just loads the mesh on-the-fly when the current frame changes. I have also added additional file types support so you can use an OBJ, 3DS, LWO or WRL mesh sequence with the node.

PERFORMANCE:
The reason why I had the “PreLoad” button in the original script was so I could playback short sequences in real time. This switch to loading the mesh on-the-fly only when it is needed has a significant performance hit. On the same machine that could playback the running horse sequence at 30fps I get only 2.3fps out of this node version. So think of the Meshfoot script as the “animator friendly” version and this node as the “render friendly” version. It really all depends upon how complex your mesh sequence is and how much memory you have. Using the node, however, a user should be able to leverage much longer and more complex sequences.

To disable the node and “freeze” a specific frame from a sequence simply unplug the Timeline node from the Current Frame. Or noodle up some animatable frame driver with a Boolean node used as a multiplier for the frame current input socket. 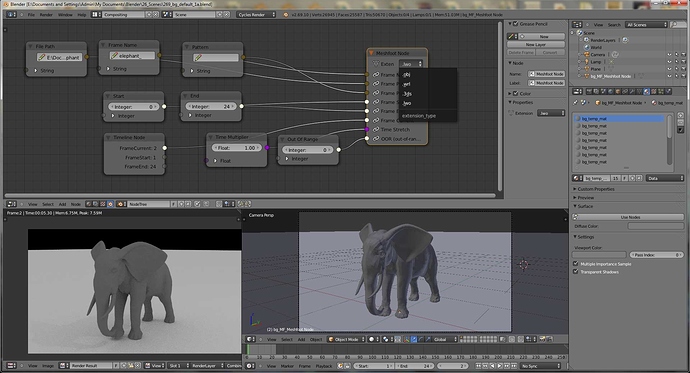 oh-my-Gosh! All this addons now are one!!! One Addon to rule them all!! Thanks Atom.