What is EdgeTune? It highlights the edges starting from every selected vertex, and when you draw over these edges with left mouse pressed, the vertex will slide to the newlycrossed position on this edge. So you can use it on single vertices, as a vertex slide, or you can use entire edgeloops with it, actually freehand “redrawing” the position of the edgeloop-vertices that will slide on the crossing edges.
Just picture a modelled mouth and say you want to reshape the lips, its prefect for that!

I was first planning to program it in C as core functionality but decided on taking the plunge into the new 2.50+ Python API, which I havent used before and it was an interesting trip altogether learning about the new features and how everything now can be done a lot easier than ever before…

If anyone would like to see this included with Blender, leave a remark and I might create a Wiki page and send it to the blokes at Blender for possible inclusion…

Hi, care to do a quick video presentation?

Also on-site is a Vimeo link to an EdgeTune video presentation/howto… First time I made such a thing.

First, I’d like to say that this is a great add-on. Don’t get me wrong here.

Second, Although this IS a cool add-on, it seems to me that it is merely an advanced edge slide update witch is already part of the many tools available to bmesh modeling.

I mean we can already slide vertexes along edges using vertex slide from the CTRL+V context menu right? But your freehand edge loop slide/repositioning is way cool.

I just think that instead of having to activate an add-on to have this tool since it is closely related to an already implemented/similar tool it should merely be merged into the same contextual menu (ctrl+V) or since it is related to edge slide instead of just a single vertex, add it to the Edge menu (CTRL+E) under EdgeTuning.

I’ll take this opportunity to say that imho one or more devs will have to look at all the add-on out there (well not all of them but at least those who make it into trunk.) and see witch one could simply be merged into Blender Core. And this is the perfect example. That said the add-on method for blender 2.50+ is way cool for obvious reasons but it also seem to restrain independent devs where they can’t seem to code what ever they want (related to the interface and where to implement their ‘‘menu’’). I may be wrong since I’m no coder at all but it may be the main reason why we end up with scattered options related to the same tool.

That said, I don’t think we(as blender heads) want to end up with a pre-2.50 blender interface. Well it’s already starting. When a user create a add-on he does is best to implement a good interface i’m sure but still. Just look at the grease pencil. There are option in the ‘‘T’’ panel and some on the ‘‘N’’ panel. of the 3Dview window. Why aren’t they all in the same panel?
The same thing is happening with this add-on. To my thinking this option (freehand edgeTuning) should also be in the edges contextual panel (CTRL+E) while vertex slide should stay where it is.

I know that there is one dev in the GSOC 2012 who is suppose to tweak the interface or something. Maybe this is what’s all about and I’M ranting for nothing

Where is the link for this addon?
On your site there is not any link.

http://www.ewocprojects.be/KnifePro1.02.zip his other script kife pro something.

website totally doesnt work on IE but it does on firefox

I think this script has a bug. 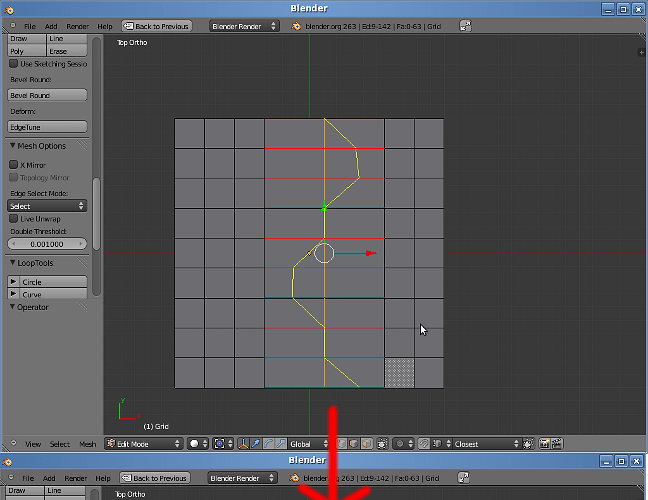 Really like this script except for this really annoying bug:rolleyes:

As to the bug you noticed, really strange, with the test scene I use everything works fine but when I create some new geometry I have the same mirroring as you. Good news is I had to mirror some values in my script to use my test scene and I didn’t understand myself why… So I just mirrored the values back and this solves the bug and it seems to work fine now. Get the adapted bug-free version at the website or use one of the kindly provided links by mrjynx above.
If anyone notices any mirroring problems with the new version then let me know, then I’ll have to dig deep to see whats wrong .

As to the website I surfed to it on my Windows install (FireFox) and it displayed the old EdgeTune page from before the change to the new version… Bizarrely enough on my Linux install (FireFox) everything works fine. Crazy. If this continues to be the case I’ll have to contact my web host. For the moment use mrjynx’s links above.

Found out something else that needs work on…
It will not work if you have a mirror modifier, bevel modifier, remesh modifier, and quite a few of the other modifiers.
It will the work subdivision modifier and the multiresolution modifier.
Course the work around for this is to just not use these modifiers until the script is fixed (if it can be).

And the error message I get when using this tool with a mirror modifier:

First, the website problem, when using IE do use the links from mrjynx above; I believe probably support for the svg containers I use is not in IE yet… I’ll change the site somewhere in the near future to cope with this.

Second, the modifier bug, there was a small problem with the code checking every modifier for a “Optimal Display” option, which is of course only there for subsurf modifiers. I changed this, new download on the same old address, do test and get back to me with test results, should be all ok though.

On a really positive note its like were getting some work done here, keep the remarks flowing in!

Second, the modifier bug, there was a small problem with the code checking every modifier for a “Optimal Display” option, which is of course only there for subsurf modifiers. I changed this, new download on the same old address, do test and get back to me with test results, should be all ok though.

On a really positive note its like were getting some work done here, keep the remarks flowing in!

Keep that positive thinking going…'cause I found another bug!

(thanks for fixing these bugs in a very timely manner and having such a good attitude about it…because in my opinion this is a really useful modeling tool.:D)

The addon doesn’t work well when rotation is not applied for the object. (The addon’s interface doesn’t follow were the edge loop went to) 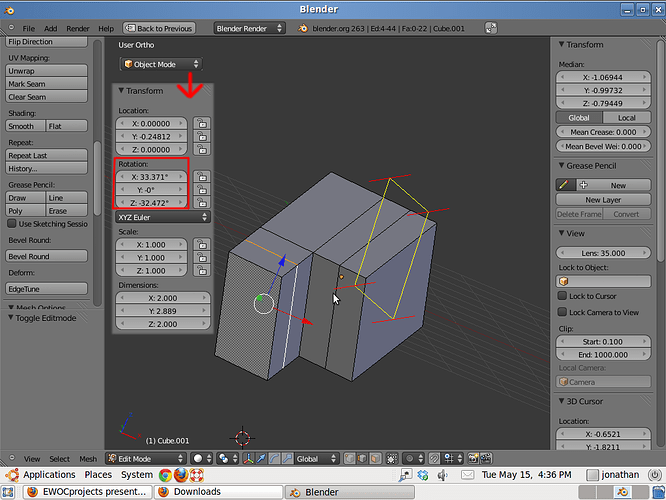 Wow this was a big one, spent quite some time on it but now also rotation should work correctly.
Just hop down the site and get the new addon version with bugfix.

Im really glad some people are taking the trouble to get down the forum and post the bugs, it is the only way to get this addon to run flawless and I must say a challenge to my programming skills also. I like it when at least some people kind of ‘acknowledge’ all the work I put into this with a simple post to the forum…

Wow this was a big one, spent quite some time on it but now also rotation should work correctly.
Just hop down the site and get the new addon version with bugfix.

Ummmmmm…(please don’t hit me:eek:) BUG…I can’t even get it to work now…I click edge tune and get I this: 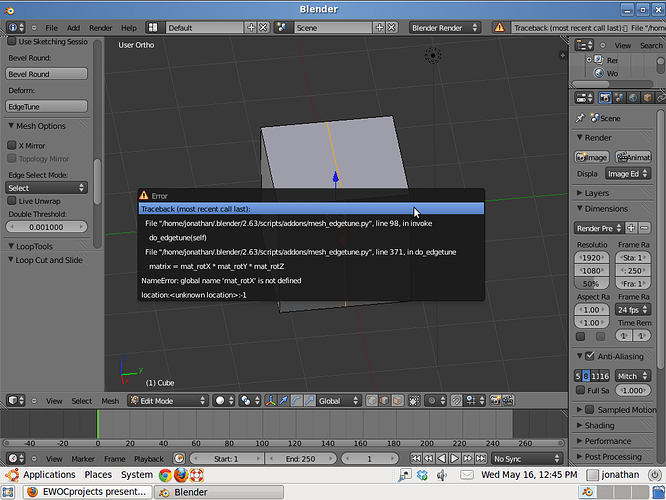 Dang…found a small bug…
If the object is mirrored in object mode…well you can guess what happens :evilgrin: 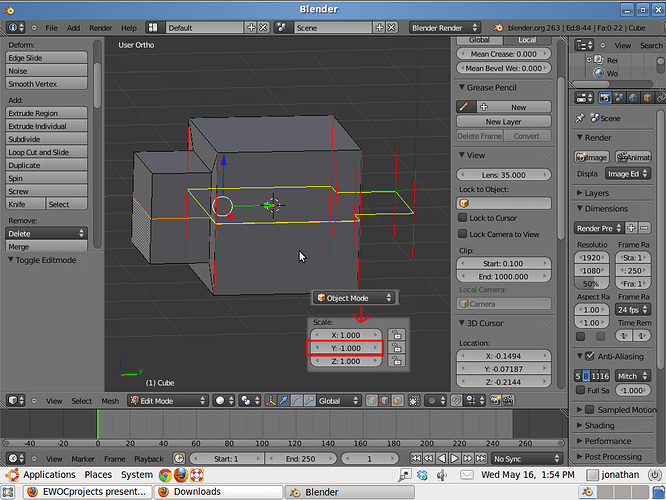 Don’t let all these bugs discourage you, keep up the awesome work:D

Are you per accident using an older version of the addon instead of the latest? I already fixed problems with scaling before and it works perfectly well here with mirror in object mode and manually setting scale factors to -1. Do check the addons mesh_edgetune.py file should be exactly 17607 bytes big for the latest version. If still problems keep appearing, do post your problematic .blend file here and I’ll have a look at it.

Are you per accident using an older version of the addon instead of the latest?

Re-downloaded still have a problem. I guess I wasn’t very specific, it looks correct when you first click edge tune but when you rotate the view thats when it goes wonky.:spin::spin: 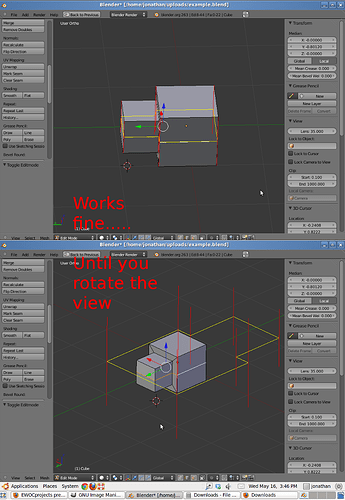 If still problems keep appearing, do post your problematic .blend file here and I’ll have a look at it.