This is my first addon so be gentle if it’s not completely up to scratch. I’ve modified Jason Van Gumsters render music addon to provide growl notifications during rendering. You’ll need growl 1.3 and the gntp python library installed and visible to blender to use it. 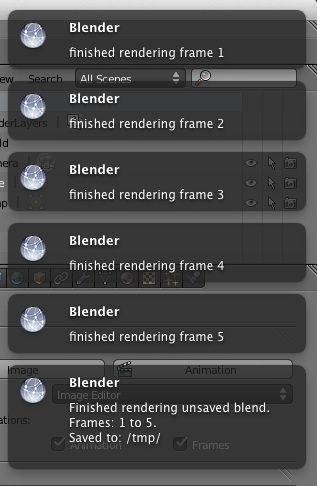 It can be found in Addons>Render panel once installed. You can download the gntp library from http://pypi.python.org/pypi/gntplib#downloads.

The script puts the following options in the render tab of the properties editor:

Here is the WIP version of the plugin:

To install it extract the growl_notifier folder to blenders plugin directory. I’d love to get some feedback on it as this is the first time I’ve created an addon.

I would like to test it and give feedback about it but until now I’m just having problems installing GNTP, but maybe because I’m noob installing addons (despite I know where the button for that is). Is it Setup.py or init.py; there are a bunch of .py files inside that GNTP and I don’t know which of the files must be installed before I install Growl.

Here are some better install instructions:

Thank you very much =)

“I’ve modified Jason Van Gumsters render music addon to provide growl notifications during rendering.” so the addon produces and audible growl while you are rendering something?

haha, no. Growl is a tool for doing notifications on OSX, it can pop up a notice on your desktop, or even send you an email when your render finishes, useful for leaving long jobs going at the office!

Hi! Does it work on Blender 2.70 or newer versions?
Thanx