I am offering up a new AddOn that traces particles. It appears as a Render engine. To enable it look for it under the Render AddOns. You do not need to select it, it is always on once it has been enabled under User Preferences. 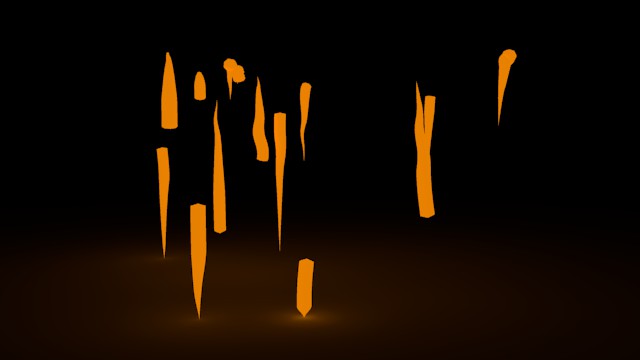 How is this AddOn different from bTrace?
RE:Trace allows you to interactively animate parameters of a trace after generation. It’s control panel appears under the Object context of a RE:Trace object.

How do I install it?
Copy the retrace folder into your AddOns folder.

What is a RE:Trace object?
A RE:Trace object is an object that monitors a particle system and generates/updates curves over time. Each trace curve has a companion taper curve associated with it. The taper is animated by the AddOn to reveal the curve shape over time based upon the particle age.

How does it work?
You create a RE:Trace object using the ‘rename with retrace_ prefix’ button located under the Render context. This button will only appear if the selected object is a mesh. Once a mesh has been converted to a RE:Trace object, additional properties are available under the Object context for that object and shown in the panel image below.

When the frame changes the emitter is examined and the particles are traced. This initial trace can take some time if the particle count is high (say 60 or more, depends upon your machine specs as well). The initial trace will cause a delay in the system, just wait for it to complete (particle end frame determines how long you have to wait). After the trace is complete, you can scrub the timeline and adjust/animate the parameters for the trace as you see fit.

To force a ‘retrace’ generation simply change the particle count then change the frame.

What particle type does it support?
I have tested it with standard particles and boids. I doubt it makes sense to use it for hair.

How do I use it?
Download the ZIP file attached to this post. Install the AddOn and activate it. Open up the example BLEND file contained within the ZIP.

Thank you Atom, seems great but I don’t have time to test it now.
I’ll check it later.Thank you again.

Thank you for creating & sharing this addon. Is there a video demonstration of it online?

So no more spots or separation of trace elements as with earlier approaches? Looks cool will have to try soon.

I have updated the AddOn to work with the Blender 2.66 release.

Thank you for this addon Atom.

I was wandering… there’s no way of making it lighter. It takes forever to calculate the curves. Maybe if it just generate the curves and not the animation?

there’s no way of making it lighter.

Use less particles. If you are running more than 100 consider other options (or get a better machine). You should only have to wait once for particle generation, then the system should smooth out and become scrubbable. Each time you change the particle count a new trace set has to be generated. So animated particle counts are a bad idea with this AddOn.

Maybe if it just generate the curves and not the animation?

I think Liero has a script that just does that if all you want are curves from a particle system.

I just tried RE:Trace with the 2.67 Release Candidate and it works.

Just a TIP here: You don’t need to select RE:Trace as the render engine, it is always on and works with other render engines. That is why the panels disappear. Just select Blender Render or Cycles and your panels should reappear and RE:Trace should work. The ZIP from the first post comes with a test BLEND file that you can open up to test with.

Oh… umm that makes perfect sense actually. Now I got it working and I think its grand!

Hi there
So I have to say in advance that it’s the first time I try to install an addon. Complete newby on this…
Somehow I don’t manage to get the addon running in blender.
As indicated, I downloaded the zip and placed the RETRACE folder in the addons folder of blender 2.67. Then I started blender, went to the users preferences / addons section, activated Testing (supported levels) and typed in retrace, with a blanc result. Then I tried to install retrace over the Install from File button, went to the addons/retrace folder, selected all the .py files in the folder and pressed the button Install from File - with no success.
Am I missing something basic here?
Thanks for any help.

UUps, sorry!
I just did the procedure again, and oh wonder, I got the addon installed.
Great, thanks!