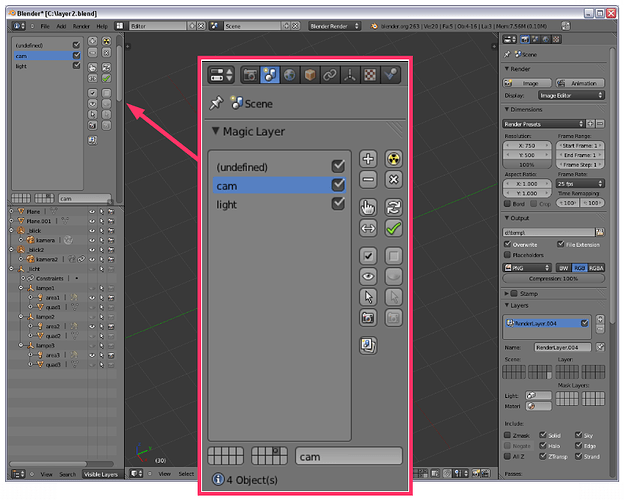 This is a layer manager for unlimited number of layers

It work same way how RenderLayers works.
But layer 20 is automatic used to hide layers!
Layers 1-19 are free to use

Cool project!
Can’t help you with coding skills, but sure enough I’ll follow this thread and give feedback when possible.
Cheers!

I was just doing some modeling, and was wondering if
the outliner could display the layer that the object is currently on, it would be nice it had that info right next to the
“Object data symbol”… they could just put a number like 1 for layer 1 or 5 for layer 5 etc…

This is not possible, i think.
But i add a label that display active object layer name
Come in next release

Thanks for add-on, I’m trying to look for + / - of your and anfeo’s addon because like now both scripts work a bit tricky . . .

For those who wants to just count + and - (what pole is winner ) instead of reading my notes, I have to say these are BIG pluses

In general “outliner” versus “blender layers” - they take a job of each other. Instead of clearing system and merge them together. (Like now we can lock object in outliner or lock separately lock mov/rot/scale in properties panel or under viewport properties = three places of UI. Or hide object by outliner or by make invisible all layer that can be done in one place as could be seen in combination with your add-on.

(OffTopic Note - There is one strange behavior of blender - select cube, “lock object” in outliner, deselect all objects in viewport - and as you can see origin of the cube is still selected, even though object is “locked” and deselected you can switch to edit mode

this “keeping origin active after deselection” gives me more strange behavior in my work.)

i can add only checkboxes, they need many space and not really clear to view

Great, this idea was posted time ago, I’m happy that it work.

This looks like a great addon. I’m gonna give it a try when I get home!

Now when I started to think about Outliner, that is the best place to work with layers, I noticed - there is “layer system” already from 2009 http://farsthary.wordpress.com/2009/08/14/new-proposal-asset-management/
I just used blender in a wrong way

Layer system like other app use, is simply a Grous in blender.

In other app you can:

From this point of view the layers in header of 3D view are not necessary to have for me.
Would be great to have more readable UI in outliner - like lighter background (that can be adjust in preferences, I think) and have more visual feedback like highlighted blue for selection etc . . . but keep it in outliner, don’t move it as addon to another place. Thank you.

Edit: This is what I had on my mind http://blenderartists.org/forum/showthread.php?223118

and maybe you can add some thing like “group layer”,see this 3dsmax tool
http://www.timsportfolio.co.uk/scripts/nested-layer-manager-v2-for-3ds-max/

this is nice to know…
outliner is very helpful…

@SaiZyca: I’m not saying its perfect

improvements are more than welcome.
BTW- in existing blender layer system can be object shared in all layers at the same time too. It has +/-

@TS1234: you can move many objects to a same group/layer by one Shift+Ctrl+G too

(can be found by hitting space bar and writing “group”. it becomes as first option “Ad Selected to Active Group”)

Anyway I don’t want to spam this thread by a bit off topic discussion.
Addon can be useful for someone. I just wanted to ask you if it’s not better idea to improve Outliner. That’s all. Good luck. And thanks for your work.

I just wanted to ask you if it’s not better idea to improve Outliner. That’s all. Good luck. And thanks for your work.

this is not possible with python only as addon

in newer blender versions the addon does no longer work and produces a type error in line 367: “listtype_name” - Function.listtype_name expected to be a string type, not scene

not shure what i did there exactly but i think i fixed it for 2.66

another fix for the 2.66 release

Thanks, this looks nice!