I’m not planning to recreate this camera but since yesterday I’ve been thinking about how one would create this kind of camera in blender or unreal. It’s not just tracking the character but seem to follow an animated camera path through the scene and track the player. Anyone who knows how this was done?

Looks to me like it is as you describe: an animated path and tracking the player. In short: it’s an AI. Just like you program an enemies AI to do certain things in certain situations, you program the camera’s AI to do different things.
It I were to re-create it:

This is the part I’m confused about, how can a camera’s animation, speed up or down or be reversed by how fast a character is running through a scene? What exactly does a nav mesh look like, is it a heavily subdivided plane and each polygon updates the character’s position and sends it to the camera animation somehow.

a navmesh is a system, that allows a agent to try and get to the closest point on a map they can reach near a target point** 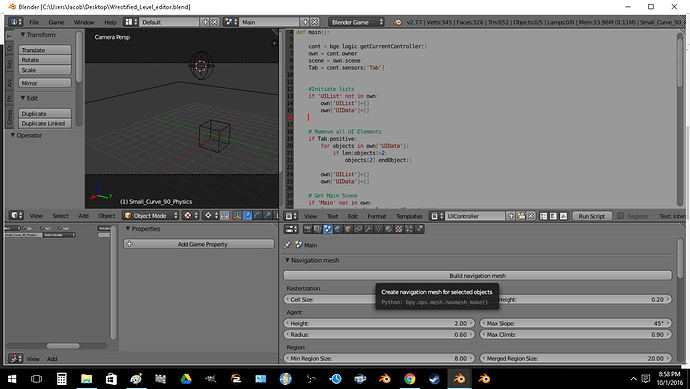 you can generate a navmesh from a track using this*

check out the steering actuator

I also have some Enemy AI examples and friendly unit RTS stuff recent in resources that use
navmesh.findPath() and custom Python behaviors.

Is there a menu for creating navigation meshes, almost tempted to fiddle with that, thanks for the answers.

I said “nav-mesh-type-thing” not “nav-mesh.” I suspect the internal nav-mesh system is not flexible enough to create this effect, though I may be wrong. It’s worth having a play with regardless of if you end up creating this effect with it.

Seems like you’ll need to do some programming to control the animation and have it respond to the nav mesh. If any of you guys ever try to recreate this let the forum know, would be interesting to see. I think it’s a very elegant way to navigate a camera through a scene.