I’m creating for the first time characters with hair (particles).

I’m using vertex group to specify where I want the hair, and till here it’s ok. The problem is that when I use children (working only with particles is not an option) some black dots appear on the final rendered image where they shouldn’t be, i tried adjusting everything on the children menu but it ain’t working. When I render from another view the dots are somewhere else. I just don’t know what to do now…

I thought of vertex paint but I don’t know how to make it and if it would solve the problem. 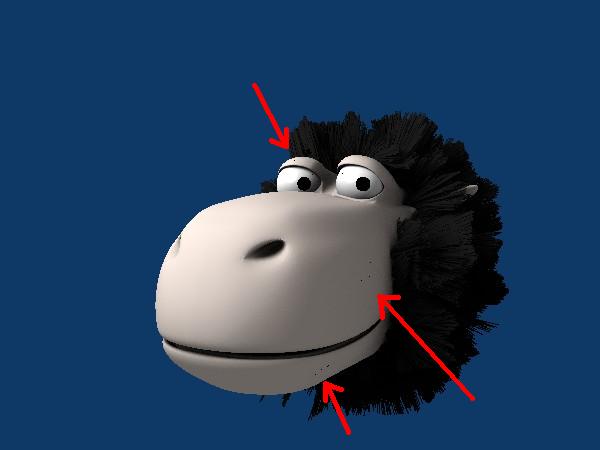 Oh and by the way, this is a sheep, does anyone knows how to make a more sheep-like (i don’t know the name of it) fur?

and sorry about my english, it ain’t good I know…

I assume you’re using the “Faces” option rather than the “Particles” option for your hair system. Looks like either some of the hairs are growing “inside” the mesh and poking through, or there are some stray parent strands for some reason.

BTW, sheep have wool (a kind of hair), which is very curly, so you may want to experiment with the particle system controls for strand shape (“Kink/Branch”).

Thanks man… i’m posting some images… 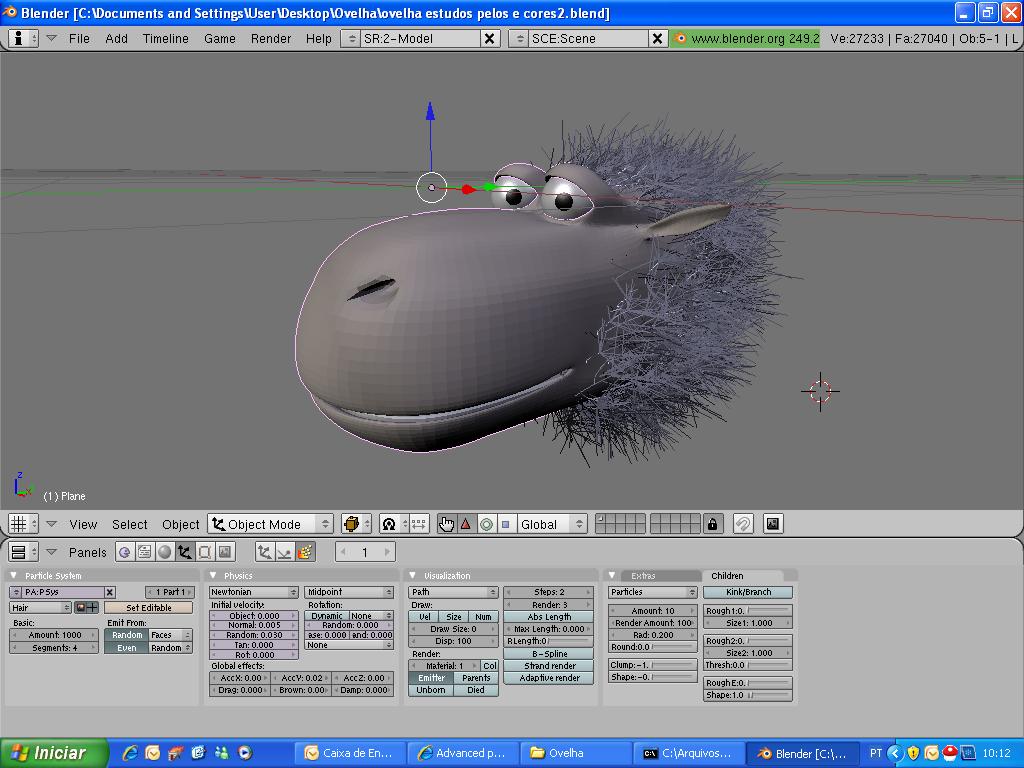 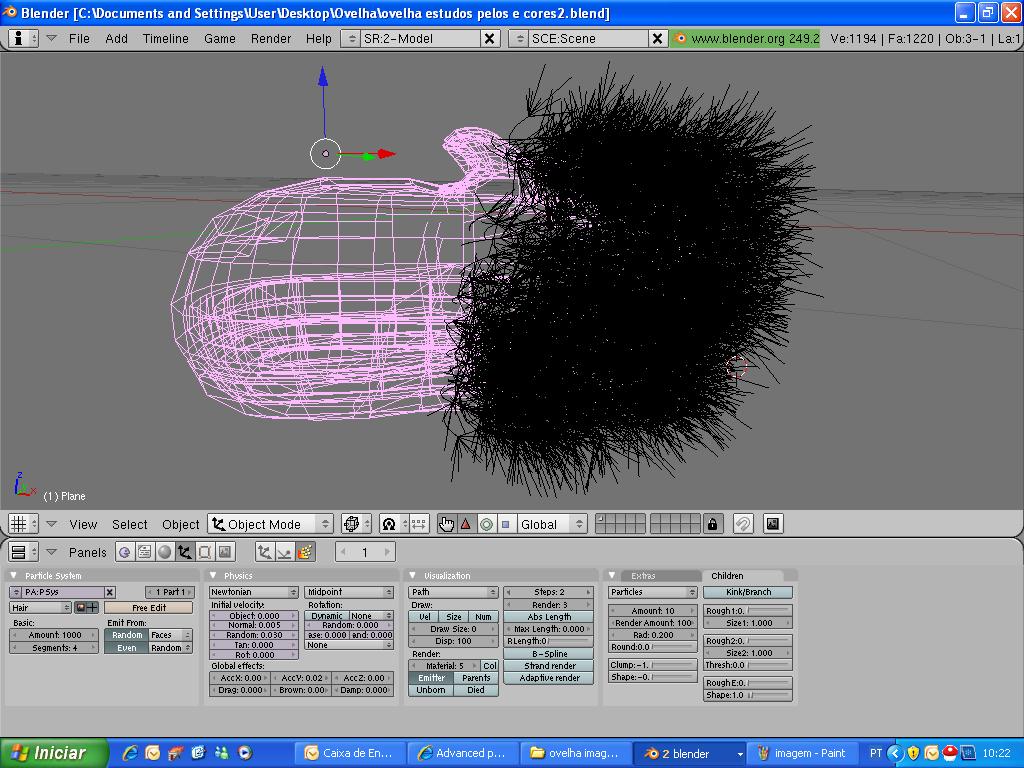 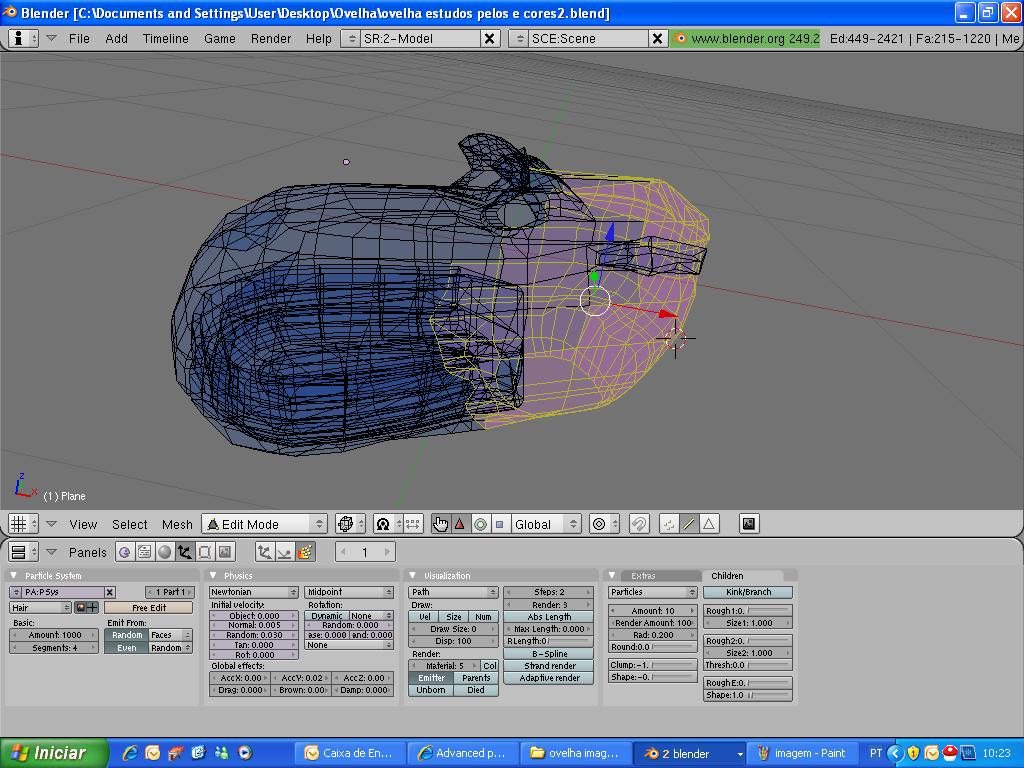 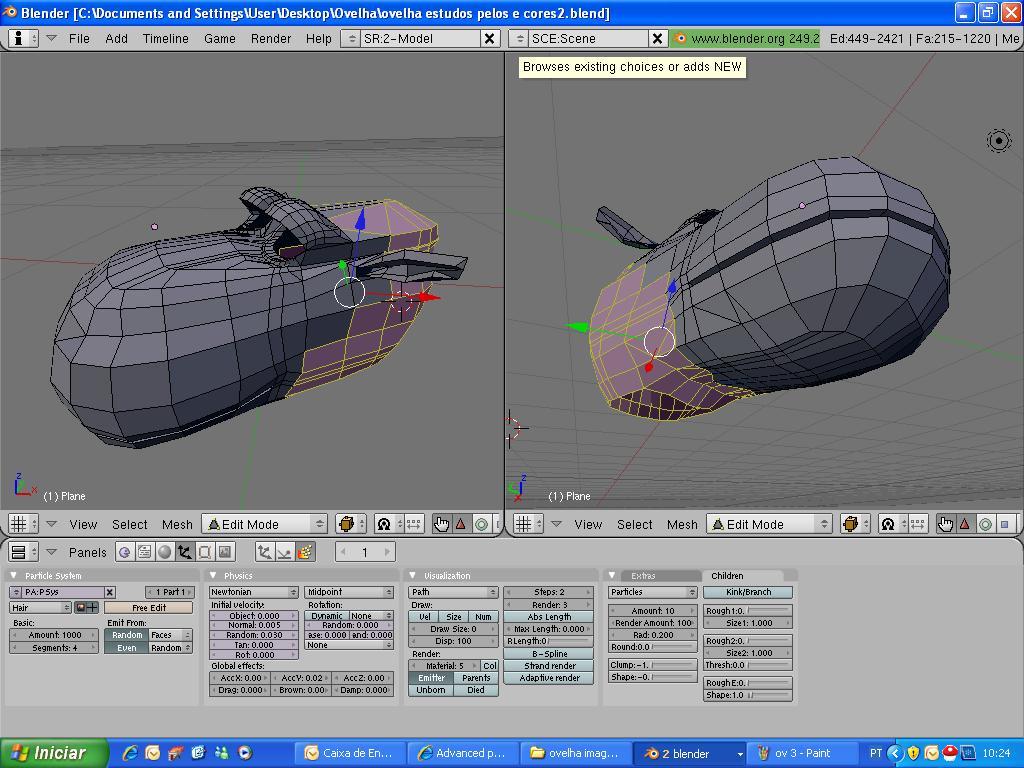 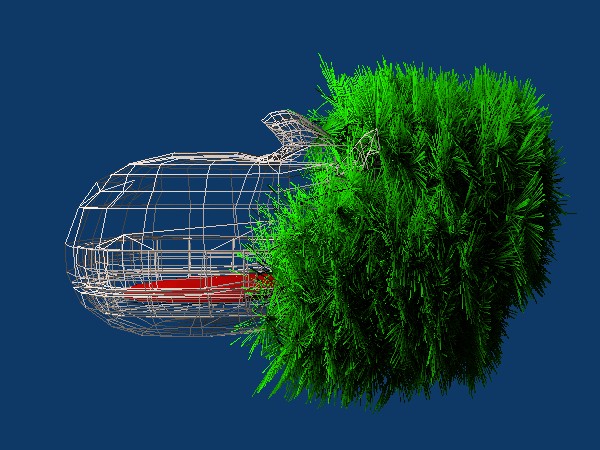 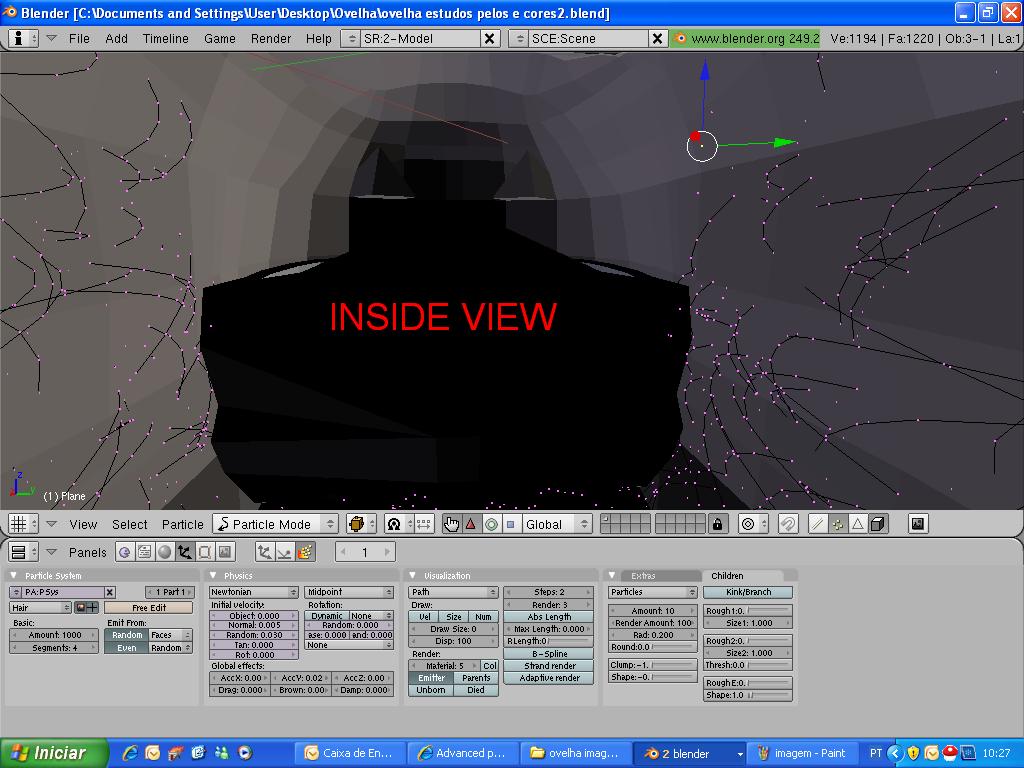 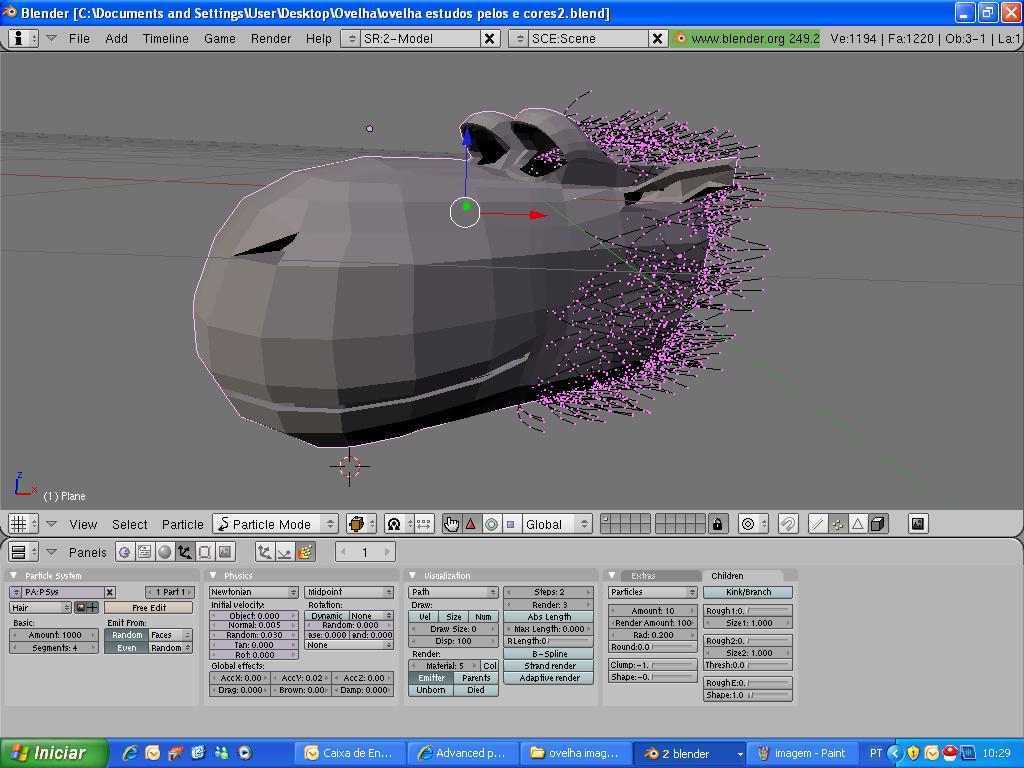 I didn’t weight paint the vertex group… was it necessary?

Hmm, that’s a puzzler, I can’t see anything in the wires or other screen shots that would explain the spots in the render. All the parent strands (I notice you’re using the “Particles” option, btw) seem confined to the VG as expected, and all seem to be “growing” out properly.

As far as weight painting goes, it’s somewhat optional, in that you can use it to control various aspects of the hair appearance, such as creating variable density or length based on the painting. That’s selected in the “Extras” pane of the Physics/Particles context, where you specify which VG is to control the system. None of your screen caps show the Extras pane so it’s hard to see what may be the case for your model.

The children particle strands look a bit odd in the way they branch out from the parent strands, but there doesn’t seen to be any “Branch” settings, hard to say why that may be.

Is it possible to attach an example .blend? Other aspects of the hair system could be then looked at (instead of guessed at) as well.

oh sure… that would be very nice of you…

I weight painted it, though it aint solved… the configurations of the particles may be a little bit different from the images above… I was trying and trying…

The file is too big so i’ll send it by sendspace link:

Thanks a lot man…

I know i’m asking too much but it’d be nice if you could also set the particles to be more fluffy and then send me back the file, so I can see what you’ve done…

Made a lot of changes, compare this to the file you made available for upload. 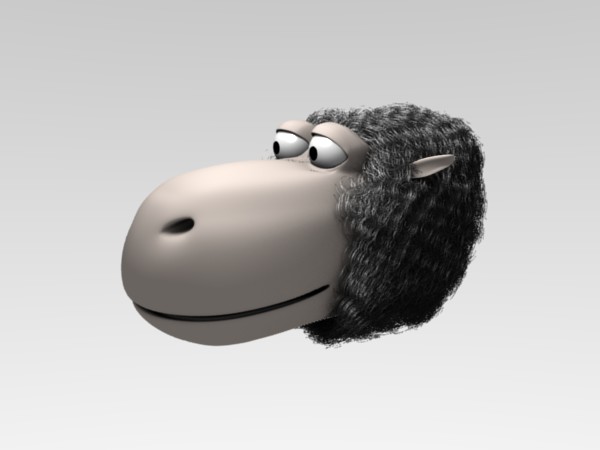 Main thing was you hadn’t specified how to use the vertex group (“pelo”) for your hair system, (in the “Extras” pane, as mentioned), but I played around a lot with the particle specs to get a relatively soft, curly, and dense layer of “wool.” That meant changing the shader specs as well so check them out also.

I also made the model scale much larger so I could get a greater range of relative size to the hair curls – your original was really quite small, made using only the bottom end of the specs range necessary.

Anyway, no stray spots & a more wooly look, hope this helps. Play around with the particle specs to see how each affects the look of the system, tweak it 'til you like it.

thanks a lot man!
it was very useful… hope I can help you sometime!