Hi,
Years ago, when Blender 2.49 moved to Blender 2.5, with the help of many, I wrote an addon. The Dynamic Spacebar Addon.
It’s concept entirely was to replace the lost Spacebar menu from 2.49 as an option in 2.5x. This expanded somewhat, to make the menu “Context & Mode Sensitive” : that is if you have an armature in edit mode or a mesh selected in object/sculpt… all modes, the menu updates according to context & mode. armature tools in armature mode, mesh tools on mesh/object mode, only add curve objects in curve edit mode ect. One thought was to have most useful common tools available easily, especially for new users.

Now, I’ve updated the addon somewhat.
One thing I missed from 2.49, is the “Add menu” that used to reside in the Info header at the top of Blender. So, even though it needs some work, I’ve brought the menu to the Info Header.
The next addition I made was to use the new Tabs system (new to me with a year off dev…) I’ve created a tab “Advanced” which brings the menu to the Toolshelf.

So that brings the menu to 3 locations in the ui. all context Sensitive & mostly only using Blender internal modules. Consistent to the level that if you activate another addon, (add_mesh, edit_mesh & more) the menu’s update & the addon is in the menu. *works for addons that append/use existing menu’s 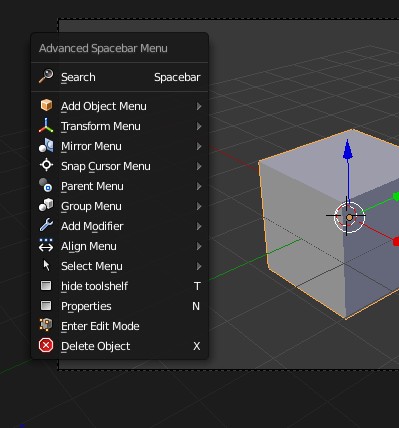 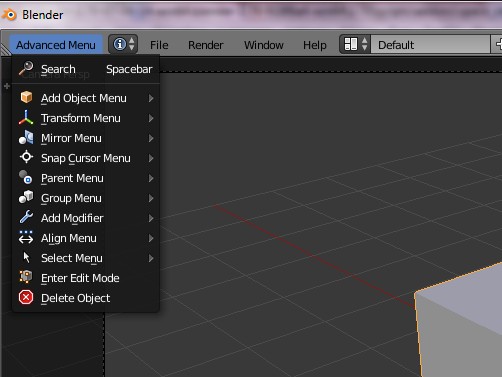 I’m interested in opinions on this.
get the script here: Advanced Spacebar Menu

Hi Méta-Androcto,
Fervid user, your idea is excellent because the official pie menu come speedly for 2.71 release and your panel is welcome twice!
Personally I dream of the material add-on(Q) in the pie menu like in Maya…
Congrats.
Spirou4D
PS: realy only 2.71, if i change 2.70 for mine release: no problem today please?

EDIT: No problem to test on Blender 2.70: I prefer in Tools panel that in main menu bar.
In main bar, i see more a picture logotype very little like Blender but in hollow.

I personally don’t like these changes.
If it is a spacebar menu then I don’t see the reason to fill up the toolshelf with another unneeded tab, use the spacebar. If every addon did this then the toolshelf it would become a huge mess of tabs.
As for the menu item in the Info header I again do not see what benefit this gives. When you change to a non 3d view it does not go away but then has no real functionality if you cannot see the 3d view.
It also doesn’t disappear when you collapse the Info header menus

yes you got me with that one

It’s certainly overkill, & yes of course you would just use the spacebar menu, after all, there’s no use for tabs or header menu if you can just use the spacebar.
However the idea is not without merit & I’m providing a working addon that provides a mostly consistent menu for the 3d view, tools/toolshelf. I’ve ran into many issues in this test release, so I’m putting it out there for feedback. Different people have different workflows, my big thing with the ui is to provide working options, even if this means duplicity for the sake of consistency. If you look at the Shift/A menu, the spacebar addon simply duplicates this with a few inconsistent layout separators, but it’s essentially the same. So I’ve duplicated this into the toolshelf & also the info header.

Thanks for the heads up on the info header issue, It may well be a fail unless I figure out a hide option.

anyways, feel free to test & provide input, this is only a wip/test & already I feel it needs to be separated into individual addons for the sake of greater control & readability.
Ideas & concepts most welcome.

i have used your dynamic spacebar menu forever and think great,
the new changes dont bother me one way or the other.
its a good addon.

i just wonder will both scripts be available? “dynamic spacebar” and “advanced tool shelf” or whatever. 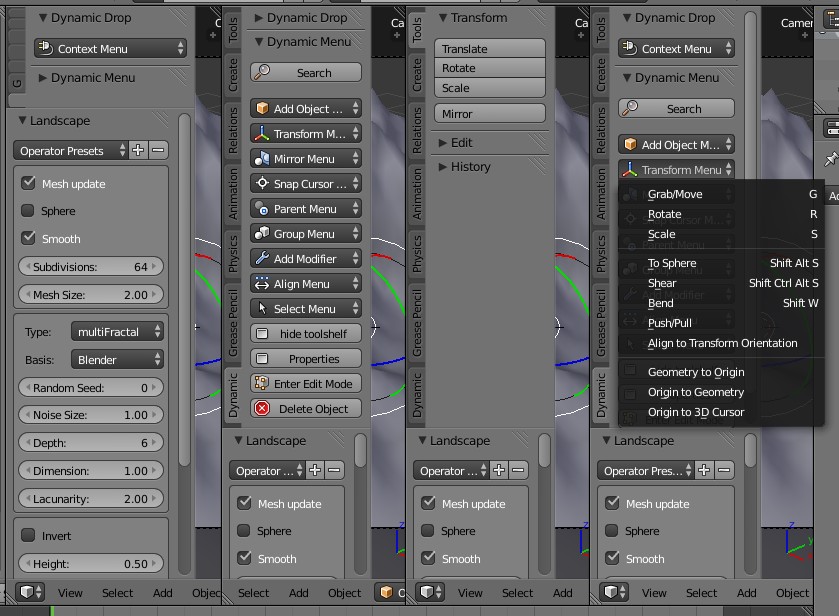 The Addon uses it’s own tab ‘Dynamic’ to create two panels.
Panel 1/ ‘Dynamic Drop’ which provides a one button approach to access menu’s. A benefit of this is it free’s up operator space as you can see in the pic, ant landscape is much more visible.
Panel 2/ ‘Dynamic Menu’ A panel that expands/duplicates the menu’s into the toolshelf.
You can see this on the left hand side of the pic.
On the right hand side I show some basic difference with inbuilt toolshelf & Dynamic addon. Dynamic Addon is not a complete copy of blender’s ui, I like to think of it as an extended menu with many useful features, that can be used in conjunction with blender.
One final example, if you activate any addon that usually shows up in add mesh or edit mesh 3dview menu’s (w key menu, shift/a ect), they will show also in this addon in their correct places.

Either as a spacebar or from the toolshelf if this suits your workflow, I find this a handy tool.
enjoy.

Is it possible to choose between the two possibility in the add-on panel of the user prefs like the “Render:Node presets” with checkbox, please. Because, for me, the two kind in the tools panel is too much but your solution is interesting with the Dynamic drop!
It’s to clarify more…because now there are a lot of add-ons and more and more…

hi @Spirou4D, yes I was looking into something like an expand button/option to keep only one panel. It would be better possibly. I’ll look some more.

I want to say thank you Meta-Androcto for the dynamic spacebar
I have used it since so many years that i nearly accepted it as a Blender default feature instead of an addon, it shows how much useful your work has been on this addon.

I’m not fan of the menu getting into the toolshelf, i prefer to use the spacebar but it’s only a convenience to me and i’m glad you didn’t removed the spacebar functionality in your new version.

Before i forget again, and i see in your new version it does the same, when you press the Spacebar , you’re getting the expected menu, that 1st entry is “Search – Spacebar” That line seems to hint that you can press spacebar again to enable the Search function instead of clicking on it.
And doing that does not work (at least on windows), you need to click on that Search entry to access it.

So if it’s not intended to be able to press Spacebar to call the dynamic menu then press Spacebar again to use the Search function, maybe a good idea would be to remove the “Spacebar” word that is next to the Search entry, so it does not create confusion

hi @Sanctuary,
the word ‘Spacebar’ in the search menu is part of blender default & just shows up…
thanks for the kind words, I think one thing nice about toolshelf option is you can just not use the custom tab & the ‘default ui’ is not touched?

Same here, using this dynamic menu for so long i forgot where it came from. I can finally say thanks a lot for this very useful addon, and well yes, it’s so great it should be default. Gonna try this extended version.

Hi.
this addon is still available? links to GH not active