advice on lighting a scene

My scene looks okay and the Textures are okay as well, but the scene lacks something. I am looking for realism. I was hoping someone here can point in the right direction as far as settings, lighting, A.O. all that kind of thing. I am using Hemi light now.

If you use GLSL then you can use a SSAO shader from martinsh or mpan3 (Mike Pan).
It you use multitexture material you can bake a AO texture.

Hi digiman,
It really depends on the conditions. If it is an outdoor scene then I suggest using 2 hemi lights (one facing down, one facing up) and a directional light for sun.One hemi facing down would be the skylight, the other would be the ground reflection from the sunlight. I made a tutorial for this kind of lighting: http://devlog-martinsh.blogspot.com/2011/08/simple-and-efficient-skylight-setup.html

For indoor scene it really depends on the light placement, light type (warm colored lightbulb or, blueish led), room color or if it is daytime or nighttime. Usually a constant ambient color helps.

It is hard to tell. Would you post one or two Screenshots?

Take a look at the screenshot. On the right is my tank, on the left is a screenshot from Dream Aquarium Of course my tank design is not very good though I put no time into the tank, but notice the gravel on both, mine does not look very good, it’s missing something, though i don’t know what. Is it the texture or the lighting that’s the problem? I will be making better rocks, grass, etc, in the near future, not sure if I am blaming the lighting when it’s just textures. 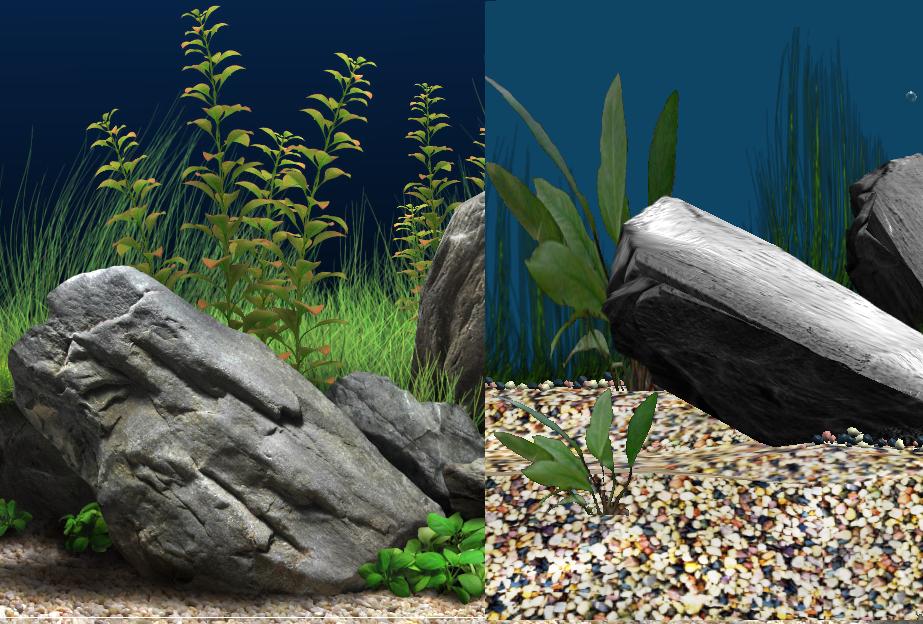 Ô, your Textures are good, I think! What is wrong with the Picture is very simple: Shadows. Shadows are the Something it lack, in the first Place. Notice on your Reference Picture how there is a huge and very softly diffused Shadow under the Stone (yep, they are Stones, no Rocks, actually ^^ ). Try fakin’ it.
The next Thing would be to add some more… more »Cliffiness« to the Stone. The Stone is actually well done, but its Shape looks still a bit artificial compared to the Reference – adding some sharp Bumps will make making that one more realistic and even though this sounds geometry-related only, it also will beautify the Lighting and Shading on your Stone.
Last thing: Watch the Contrast of the Grass/Foliage! Judged from that still Picture the Foliage looks pretty neat, actually, but the Color does not have enough Contrast to the Background (Lighting Problem? More or less, increase the Emit or something similar!). Contrast is always a very important Point when it comes to composing good Colors and Lightings.
Ô, and make the Ground Texture less bright, give that one less Contrast!

I hope i could help. The changes will be easily done, I am sure. : )