You can see how it works at:
https://www.nukeygara.com/learn-akeytsu 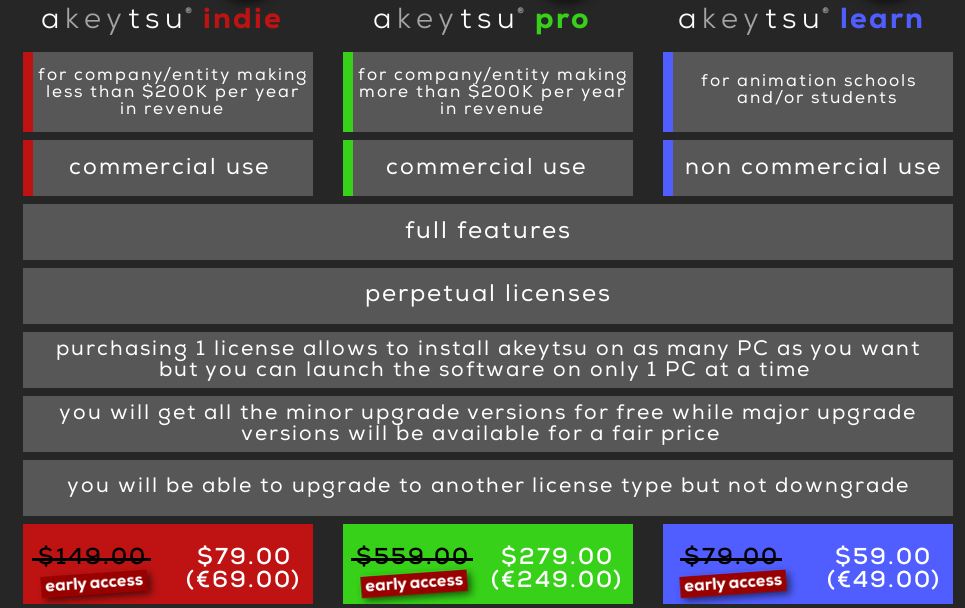 I think blender devs could learn a thing or two from the design and features :eyebrowlift2:

Has anyone tried it already? Is it intuitive or is it like ZBrush? (UI, learning curve, usability)

$79 looks really yummy, especially that FBX export is there and it’s a perpetual license with free updates.

still trying it out,
currently in bug and quirk hunt mode so I am concentrating more on that currently… which might unwillingly skew the review

a few bugs in akeytsu Beta;

another bug when importing files into UE4;

animated files can´t be imported to Blender - could be a bug which is for the FBX Blender developers…?

one quirk which hopefully gets sorted out; you can only run one instance on your PC. (with many tabs/opened projects)
which means its like Firefox - many tabs/projects open but ultimately one process/one instance.

for wacom support you have to activate ‘show mouse cursor when dragging’ after that it is cool.
for a Blender user it might be strange to select with left click…

So far in my view akeytsu is having neat ideas nicely implemented and even with some available bugs, the decision to buy was there and done quickly.

to make me give a final verdict;
I would wait at least the end of the beta to make a judgement or at least till shapekey support among other stuff is available…

Despite the bugs the Team behind Akeytsu is really dedicated and helpful + the fact that the beta is for free, try it out on yourself since that is always the best way

still trying it out,
…
Despite the bugs the Team behind Akeytsu is really dedicated and helpful + the fact that the beta is for free, try it out on yourself since that is always the best way

Well, I wouldn’t mind getting it if I understood workflow better

Are there any training materials? Starting with bringing model in, rigging it and animating it and finishing with exporting ?

Is the Cycles (as motion cycles) Editor similar to CAT’s for 3DS Max (all parametric, don’t need to touch a single bone to create pretty elaborate run/walk/etc. cycles) ?

FBX mess is really concerning :no:

right from the start there is an elaborately made for free training series which is a bit longer than 1:30 hours, it
https://www.nukeygara.com/learn-akeytsu
covers every step in the animation and skinning/rigging process.

additionally there is a manual which explains further stuff.
https://nukeygara.atlassian.net/wiki/display/AUG/akeytsu+Manual

the cyclemaker -hopefully what you meant? is explained here;

So far you can export simple rigged files from Blender to Akeytsu but reimporting to blender is as written not possible.

there is so far no equivalent to Riggify or Pitchipoy Human rig available,
or the Mocca rig presets which C4D gives. (don´t know about cat in 3ds max)

Such things might come when Akeytsu gets to version 2.0 when its being optimized for TV production and Film.