LightWave has Horizontal and Vertical but I only see one number for FOV in blender.

If you look at the picture of Blender camera properties I posted before, I showed the vertical FOV. To see the horizontal FOV change it at the Camera Sensor panel (it say ‘Auto’ per default, which is the same as horizontal).

OK I see. I keep forgetting where things are in the blender UI.

OK I’m confused now. The Horizontal / Vertical you pointed out seems to be for the sensor size, not the FOV. 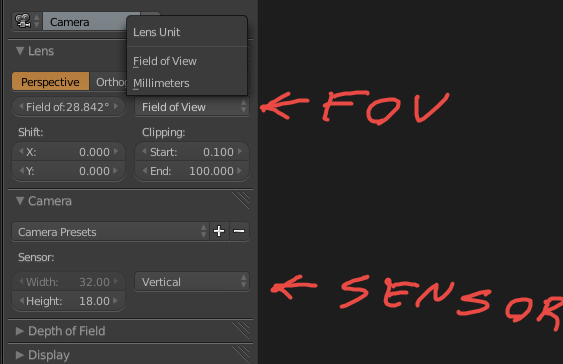 OK I’m confused now. The Horizontal / Vertical you pointed out seems to be for the sensor size, not the FOV.

Heh, it helps if you know the math. With a known focal length (say 35mm) and known sensor dimensions (width/height) you can calculate the FOV (horizontal/vertical). Or you know the FOV and sensor, you can calculate the focal length. Or the focal length and horizontal FOV you can get the sensor width, and so on. They are all interconnected. You should notice the Field of View value change, when you change the sensor from Auto/Horizontal to Vertical.

I would prefer it if the horizontal/vertical FOV were shown at all times, but the devs seem to think it doesn’t matter and UI designers think it adds clutter and confuses new users.

The Octane plugin developer is working on Alembic support. The Octane devs have started to add it to Octane as well so the plugins are following suit. Maybe it will be merged in the regular Blender release at some point?