New guy here. Will end up at game spec.

Not but it seems similar an alien i saw before without two 2 eyes :).

It’s only Blender or sculptris?

But in general looking nice your alien (Y)

Thanks guys! This is ZBrush. This is one of the first times I’ve done tertiary, so I could use some help with that.

Thanks! Quick composite test. I’m also thinking about scales for the underchin-skin. Could really use some help overall though.

Some anatomical info about his 2nd arms.

I like it. Strange anatomy; totally unrealistic but very cool.

Looks nice the model , i thought it was Blender work

Wonderfully original model. I like how it’s simple enough to be attractive to the eye but it’s complex enough to be anatomically realistic.

Update. I’ll get back to this, but for now I think it’s in decent shape. I have a turnaround prepped as well, but I can’t export it from Blender because it keeps crashing, so I dunno what to do about that. If anyone’s used the VSE and could point me towards a solution, that’d be great. 5700 tris. Uses diffuse, normal, specular, gloss, alpha, skin tone, skin mask, and translucency maps of various sizes stuck into various channels. Rendered in Marmo. 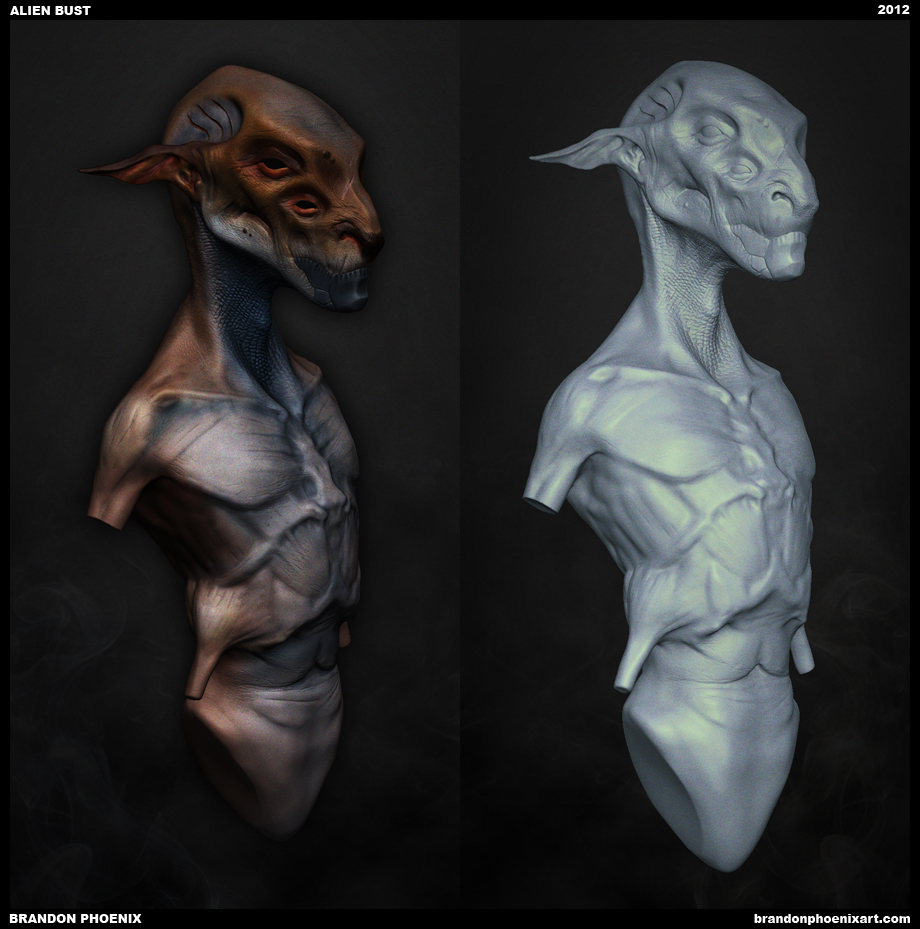 Damn, this is AWESOME! I would be amazed if you made a full body.

Final renders are up. I’ll prolly move this to finished projects.

wooow this is so dam good

Let me know if you have any questions regarding method.

You have two areas where the colors/texture are too isolated.
If the jaw is grey it’s either bone, or metal. Therefore, there should be other areas with an exoskeleton, or with metallic extrusions.

either add more areas with the bone/metallic texture, or change it to the white or beige color you used for the majority of the lower face.

the other area is the neck. its the only place on the bust where there is a dark blue cross hatched texture. try making the piece more cohesive by adding that texture to the sides of the ribcages.

the technical execution is amazing
but two things impair the believability for me:

a species that evolved four eyes: why would they all be side-facing?
most dominant species have forward-facing eyes
and if you have four, why wouldn’t one pair be forward- facing?
side-facing eyes make it difficult to generate stereoscopic vision
and a technological species would habitually need to look forward