All my faces are creepy 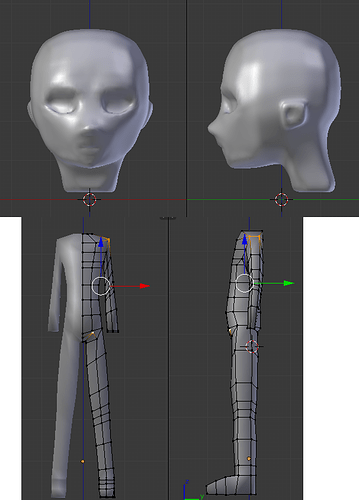 Here’s what i’ve been up to.

It’s been quite some time since i had sculpted so i feel like i wasn’t able to get around as well as i thought i wold.
I was planning on cutting out the holes for the eyes for a seperate mesh for the eyes, so i didn’t try to sculpt them.

I guess i can’t aim for perfection though

I should start the retopology on the head.

I tried to model the body without sculpting. I think if i get to the animation process with the character, most of the skin that moves will be covered by clothes.
I still need to make hands on it, but by whatching Johnathan’s cgcookie video on have topology i learned alot on how to make them with more definition than the rest of the body. I use to have trouble with that because an edgeloop would cut through the whole body, but by adding little diamond faces just before the fingers, it causes an edgeloop to cut around the fingers rather than through the whole body

I’m quite jealous of your character there vangoule

That looks fantastic. Are you going to be making some anime looking animations too?

And also, i don’t know if this is a stupid question but. On your mesh, how are the lines between the verticies curved like that? I didn’t know you could curve an edge between two verticies. It looks like that would really help make the mesh look more detailed with less polys.

Ahh, sorry. I took a picture with the subsurface modifier active. By checking an option with it active you can see the smoothed edges which allows you to model a lot smoother things. None of my character is sculpted. It’s also my first character that has turned out ok. Honestly, it wasn’t long ago I was getting results worst than yours. Eventually you’ll bring together everything you learnt and be able to make the character you want. So keep at it! I was planning on making some animations, however there are some issues with how I created the body that cause rotating certain bones to skew the mesh so it may be a while till I get something working nicely.