This is a wave based, top-down ‘shooter’, called “Spectrum”. It’s pretty much done, just needs some difficulty balancing and other tune-ups.

Please try it out, thanks! 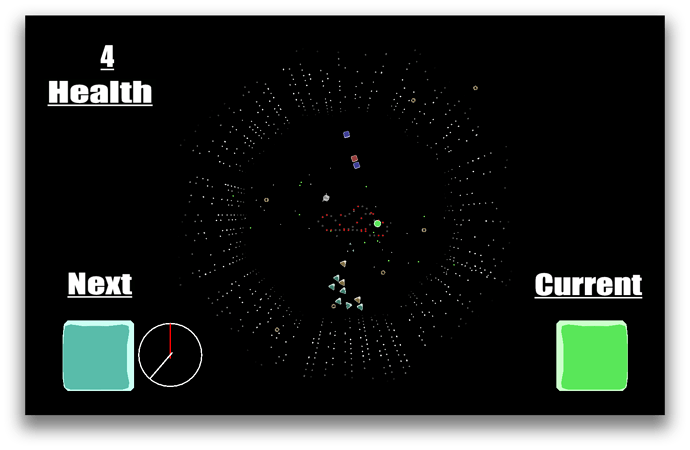 What am I supposed to do ?

I start the game, I click on Play, then there is a text about greatest hero and villain, and the there is that : 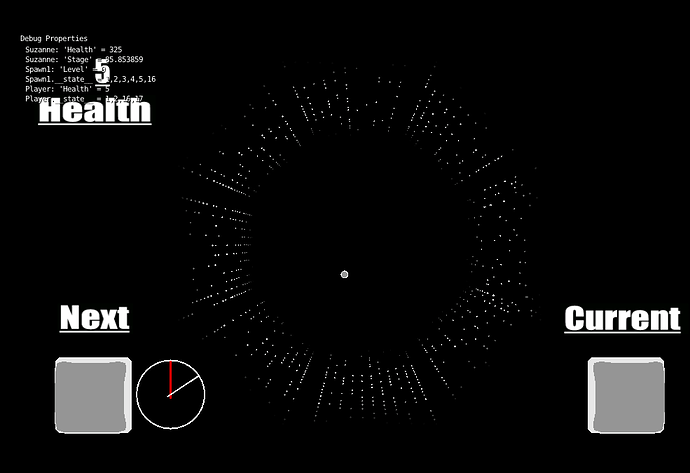 I can move with arrow keys but nothing else. Am I supposed to press on a key to make ennemies appear ?

You wait 5 seconds, which should be one turn through the clock.

I wait 2 minutes and it does nothing

I have no idea how that is happening. I downloaded the linked blend file and it worked as expected on my computer.

From the debug properties, I can see the player isn’t changing state. Can you turn on the print de-bug info for the “WeaponT” property on the “Player” object, and the “Time” property on the “Spawn1” object. Those should be reseting (to 0) at 5 seconds and 30 seconds respectively.

I just tried, these properties were counting endlessly.

The actuators which control Spawn1 creating new waves are “Property” and “Near”, they’re under state 16, make sure thats marked for initial. If it is, then there is a bug, if not turning that on should fix the problem there.

Also, the actuator which give the player abilities are also under state 16, its the “weapon5+” actuator. Again make sure that state is set for initial, if it is and doesn’t work then there is a bug with that actuator.

Also, i suggest using 2.67b, some of the bugs may have been fixed with that release.