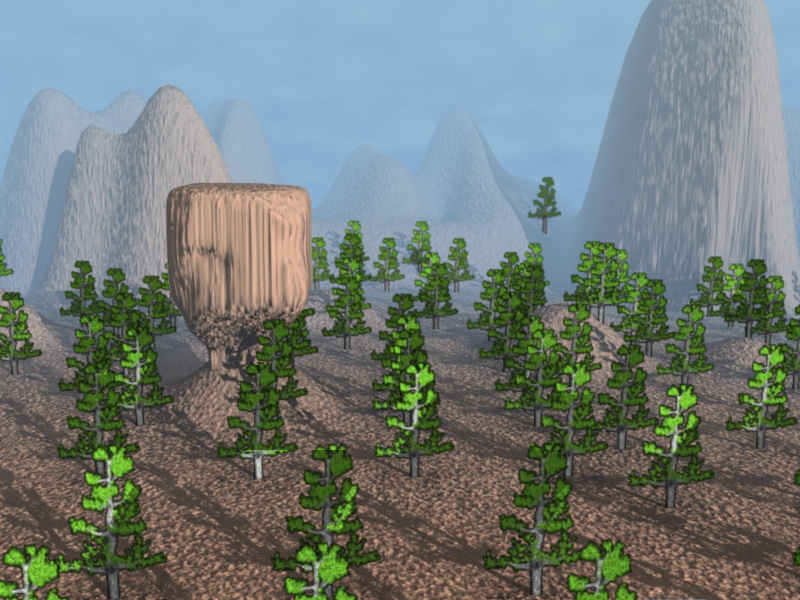 Sounds interesting, I will check out arboro - I wonder if it can make a huge forest though - I will search for it on the forum.

But still, is there a way to get alpha mapped images (with ztrans) to react with mist properly?

I checked out Arboro and it generates large polycount trees. If I want to cover mountains with trees then I think I will still need the alpha-mapped plane trees in the background and these awsome Arboro trees in the foreground.

Here is my blender file I used to generate the simple mountain image above. Anyone know why the mist is lighter on the trees than on the mountain?

I tried every which way to do this and came up short. Best I could do was workaround it by lowering the contrast of the tree images. Looks ok, but not ideal.

Thanks for helping to confirm this issue - I am going to submit it to get it fixed. By the way, how do you change the contrast of the tree image?

As I understand it ‘mist’ is a cheat that works by allowing the world color to show through, as if you’d adjusted the alpha in a gradient along the z buffer. The tree planes have z-transp on, which blocks the world color and unfortunately then the mist as well.

I did another experiment and this time alpha-mapped planes worked!!! I don’t know why yet but here is the link to the .blend file to compare with the previous one where the mist didn’t work right. In the picture, the three trees on the left are alpha-mapped trees and the trees on the right are 3D trees imported from the Arbaro tree maker software which I really like alot. 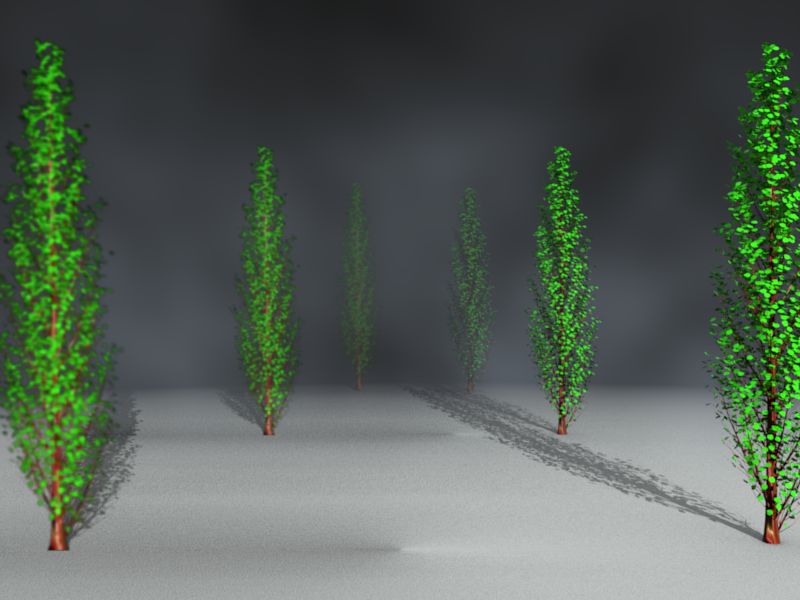 K, this is stupid. I SWEAR I tried everything last night, and now they work fine. Grrr…

Thanks for blend… even though I still haven’t a clue.

and now they work fine. Grrr…

There must be a setting in my first blend file somewhere. Well, if I have problems with the big scene I am making, then I can come back and compare and hopefully find why the first blend file has mist problems.

OK, I know why my first trees look wierd with mist on - Its because they are dupliverts. The alpha-plane tree looks fine by itself but for some reason if you use particle emitter to place a forest, the trees respond less to the mist.
Is there a way to fix this?

I think I know what’s going on now - when I pressed “Shift Alt A” to “make real” the dupliverts, I discovered that there where 10 or so alpha planes on top of eachother. When I moved them away from eachother, then they responded to mist properly. So I think that the particle system, when set to static, emits a bunch of particles or alpha-plane dupliverts in my case, on top of eachother. I am guessing that the “static” button is designed for hair where there would be many particles emitted in a vector to make a hair. But in this case, we only want one duplivert per emitter site. I am fairly new to Blender, is there a way to get only one duplivert emitted per each emitter site?

I think I figured it out and I attached a picture to prove it. To make the particle emitter emit only one duplivert (alpha-mapped plane with tree) you have to in increase the step size to a large number like 100 on the particles tab. Eliminating these redundant dupliverts also greatly increases Blender’s performance so you can put many many trees in your forest. 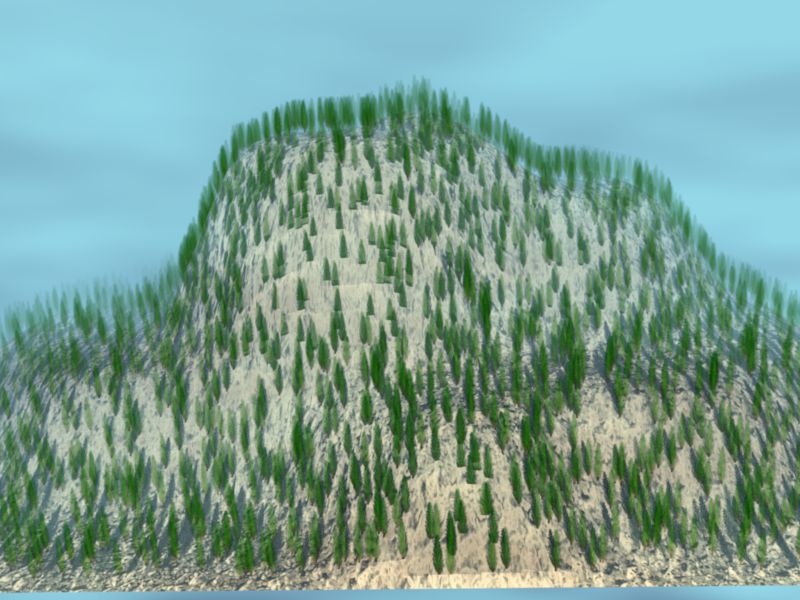 Beauty. I’m now going to delete numerous cards I used for my trees and try your way.

Beauty. I’m now going to delete numerous cards I used for my trees and try your way.

Thanks! I tried rendering with Ambient Occlusion but the square shaped tree planes are still occluding so you see a square occlusion for every tree. I saw that someone else experienced this on a alpha-mapped leaf. I guess the way to remedy this is to make the plane close to the shape of tree.

One thing that would be nice is if the particle system had thickness, height, and direction randomizaiton. This would make the forest more natural looking because the trees would be different shapes and sizes. I think this would benefit particle emission in general and would make sense in static mode too for hair.

I think harkyman developed a script to drop cards and scale them randomly. Google harkyman and “Sears barn” or something like that.

I will check this out. I already tried Beast and Beast-rewrite but Beast can’t seem to handle planes - only solid objects. I like the particle idea though because you can put a face camera constraint on the alpha plane and all the dupliverted particle planes inherit the same constraint.

I stuck the trees into a mountain scene I have been working on for awhile. I am liking what I am seeing. I used UV mapping to unwrap the mountains and then texture paint to paint the cliffs where the boulders needed to be on the cliff and then I saved the image and made a bump map for the boulders and brought it back in as a texture map. I put 30000 trees on the land but I can put up to 100,000 per emitter. Very cool. I used the t-terrain plugin to make the snow and grass. This is all rendered with ambient occlusion on. Too cool. I have so much more to learn and experiment with but this is amazing what can be done. 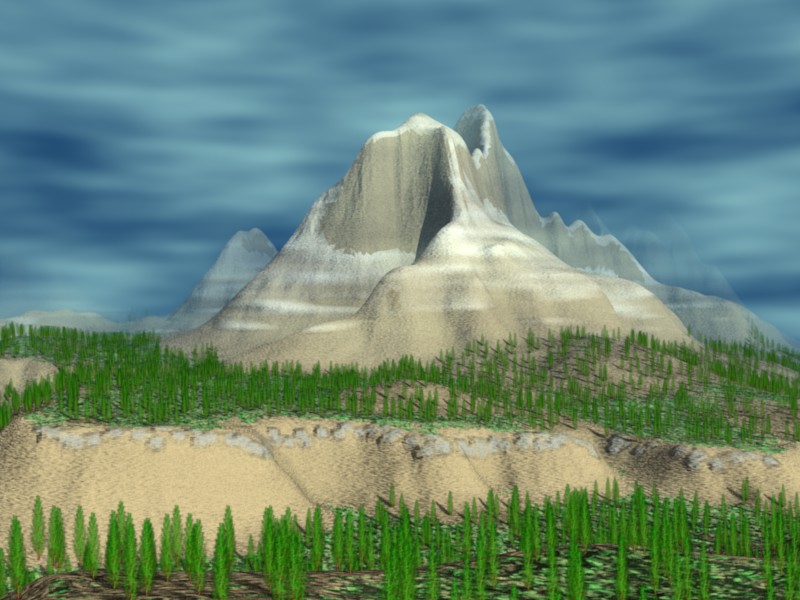 have been looking to make a forest scene for ages and found the trees a real problem, thanks to the previous post’s most helpfull