small problem?!
it works despite error message, except that you can no longer see the selected trees,

is a saved scene that was opened again. 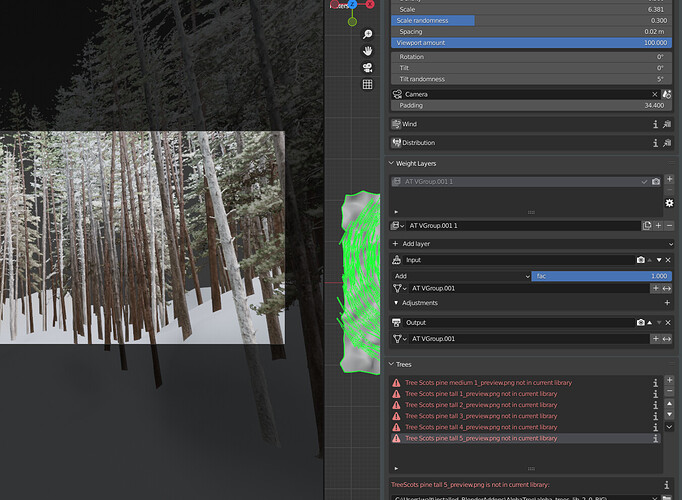 I’ll set it up again.
but had not changed anything in the path.

I had opened the scene in K-cycles where the error occurred,

Hmm, that’s very odd, does it work when you open it in normal Blender again?
I don’t have K-Cycles, so I don’t know if that would affect it…

have checked the path in the Prefernces,
then it worked again ,
did not change anything today. 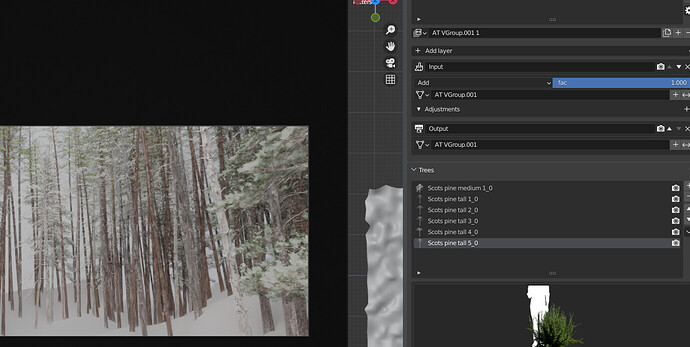 Reopened Blender, loaded the scene,
textures not there,

has already caused that the textures are there again

very strange Reopened Blender, loaded the scene, textures not there, path selected with Ctrl c has already caused that the textures are there again [alphatree]

Hmm, ok, I think this probably has something to do with how the previews are cached, when you update the path, it updates the cache, and it all works again. I’ll try and replicate it and find a fix. Thanks for reporting that, that’s very useful!

Ok, I didn’t manage to replicate the error you had, but I have a fair idea what’s causing it, so I’ve uploaded a new version that should fix it

.
As a side note though, investigating this bug also made me find another one, which is now also fixed. So overall, that was a good thing to look at!

Nice that it became a successful double solution.
Happy weekend

Alpha Trees 2.0 has been released! 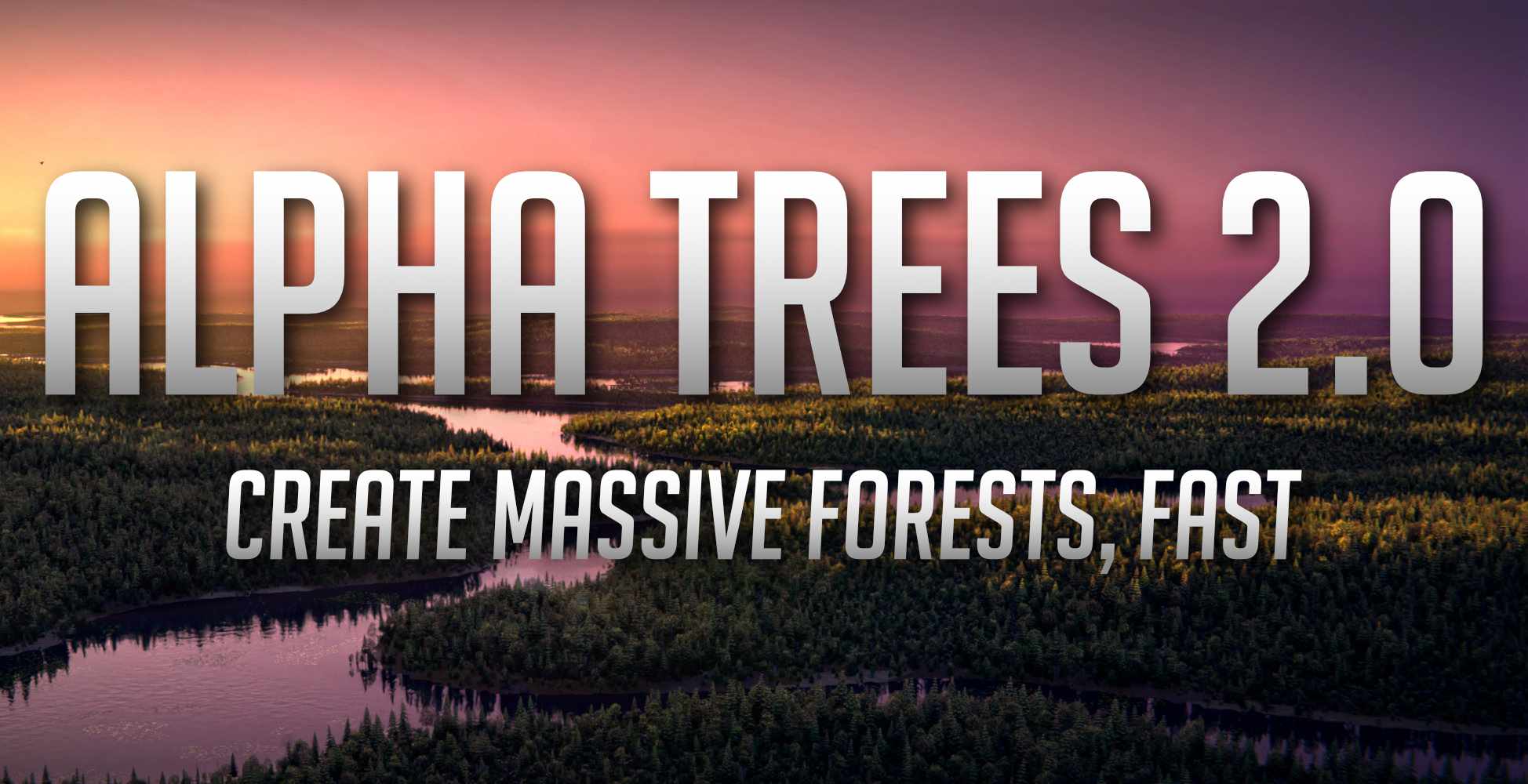 It’s taken quite a lot longer than expected, but I think it was worth it to complete the update with all features.

+ a lot of bug fixing and head scratching

And of course, thanks to all the people who used the beta and weeded out all the bugs I managed to leave in! @walt1 @marcatore @giacometti777 @Mash3d + others.

Congratulations! “Add support for types of Alpha other than trees” How does the alpha generator work with buildings etc?

Hi. Will these features be part of Alpha Trees 2.x or will they be in 3.0 (meaning: the user will have to pay more $$ to get them)?

Well, that’s all a plan for the future, so it’s not completely fleshed out yet, but it should be fairly simple, as the shader is probably quite similar to the tree shader but without the translucency…
The general process would be the same, but with some modified steps to make buildings look better.

@xan2622 I’m not entirely sure at them moment since it’s probably a fair way in the future, however, all users who have already bought it will definitely get a free upgrade to 3.0 when it comes out, just like with 2.0 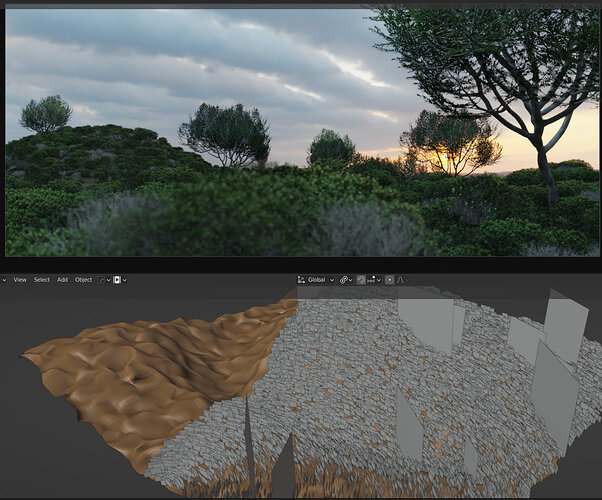 Just a quick update to say that I’ve added a new “Lite” version to the Blender Market store.
This version has all the same features as the normal aka “Pro” version, except in only has 50 trees instead of 150, and it doesn’t have access to automatic scattering or camera culling.

The price of the lite version is $25 versus $45 for the full version. 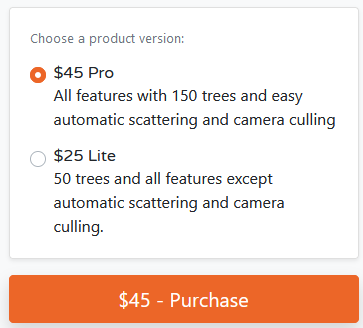 My reasoning is that $45 can be a bit of an off-putting price for people with poor hardware, who would probably find Alpha Trees the most useful.

Also, anyone who has already bought the addon will automatically be given the “pro” version.

Hi, I am about to finally buy a copy of your add-on.
Question, if I’d want to sell an Obj version of a 3D landscape model, would it be acceptable if it contains alpha trees. This would be a a one time occasion per model and not on the usual model sale marketplaces.

Hi, yes, that sounds like it’s ok, do you mean as in commission or client work?

If I’d want to sell an Obj version

Do you mean as in a .obj file or a .blend? Because if it’s a .obj then the shaders for the trees won’t be saved, and it probably wouldn’t be very useful, since the shader is really what makes the trees look good. Otherwise, if it’s a blend file, then it should work well.
Hope that helps!

They want the model which was used to create their images.

I can put a note that they have no right to sell parts of the model individually.

I’ll have to see regarding the file format. Has to have the textures in it. They probably don’t use Blender.
So it needs to be reasonably versitile. Suggestions?