Nonetheless, after the long absence, the artistic bug has finally returned and compelled me to do a piece of art again.

The image below was composed over the process of about an hour and a bit using Blender and Photoshop. 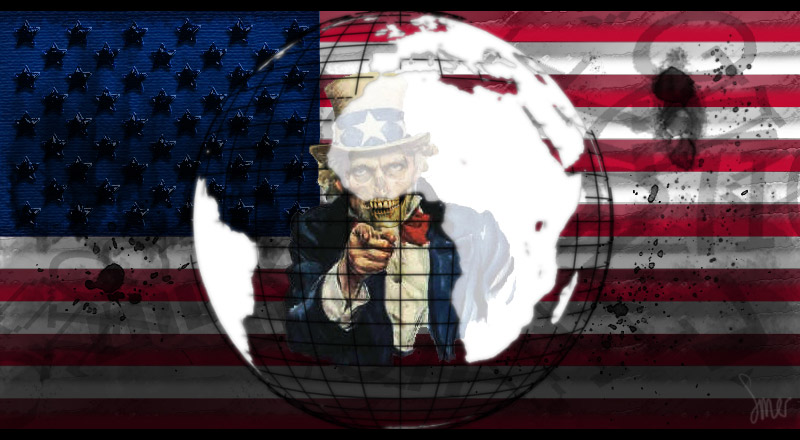 fantastic mix of methods mate! its’ great to see you’ve been off gathering so many skills in areas of the arts and industries. I really like the way you’ve used the flag, its a lot of space to compose things on and you’ve pulled it off.

Great work and very very cool to see you posting again!! It’s all so nostalgic O_O

quite a bit of disrespect towards americans,

maybe you could have done a better job of expressing your hate for the war without attacking all of america, last time i read the news americans support of the war was down to 29%, so do you think its a good idea to attack 100% of america.

i agree people should be able to produce anything they want, but this is really poor planning on your part, first the globe is showing africa? second you really shouldnt ruin another countries flag in the way you have. third you should find a way to show you unsatisfaction with the part of america that supports the war, and not all america.

Welcome back. And, as a rabid libertarian conservative I say to please do artwork as your heart desires and let the chips fall where they may.

I wouldn’t hang it over my fireplace, but nice work.

Super Wu-Man, I do apologise for any insult you may have taken from the image.
I certainly did not mean to ‘attack’ all of America and I do understand that support for the war is now at an all time low.
This is merely a work of art - and as it has a political discourse it may cause a bit of controversy - but its intention was not directly to cause insult or offence, but merely to allow me to express myself.

On the globe criticism, yeah, that was me just being lazy =) I meant the globe to represent more the globe than just the focus on any country, but I guess the focus would have been stronger had I positioned it.

Basically Super Wu Man, this piece of art work is here so you can critique it…not the message behind it. Critiquing art is about giving examples of how and why the art could improve WITHOUT using your emotions to do so. Please dont misunderstand as I TOTALLY get where you are coming from…it’s just that Smerity didn’t put his work up here so you could tell him how you felt about the image it portrays, he put it up here so you could tell him about the work. Telling someone about their work without letting emotions interfere is difficult, but it is the true way to help someone grow in expressing their mind while bettering their performance. BRAVO Smerity on the work!

and as a citizen in the USA, i would have to say anyone has the Freedom and the Right to say or express themselve however they wish.

Remember the most protected form of speech is “unpopular” speech.

Since 60 % of high school grads don’t understand compound interest or cannot find the pacific ocean on a map, I would say it doesnt really matter which continent is showing.

Great job with the artwork though. I think it would make a nice wallpaper at a larger res.

good work, i really liked the texture on the flag…and people, this thread is becoming too political

I guess that’s why I posted my message. Just comment on the work of art, not the ideals of it. Again, great job on your piece!

I wouldn’t change anything about. As a work of art, I think it is a success. In my opinion, art is a way for people to communicate emotions, and should express something. Based on some of the previous posts, I would say it has done that quite well.

I notice that you have not said that the piece is about the war, but we all understand it to be so. In reality, it could be about any number of topics, but it still communicates a subject and emotion quite clearly. Yet it remains open to personal interpretation. Super Wu-Man interprets it as an attack on Americans for the war in Iraq, I take it as a portrayal of those have used images of American patriotism to push their policies of death, and I bet you as the artist have a meaning attached to it that is different than either interpretation. Nonetheless, the emotion communicated is still the same.

Eh, it’s ok. Not much work could’ve gone into it though, besides photoshopping. Also, your ‘uncle sam wants you’ picture is showing heavy jpeg artifacts.

Uh, not comment on the “ideals” but just the “art”? Sorry, that’s an ignorant line drawing game. Would you feel the same if someone posted Nazi “art” or Muhammed cartoons? How about your national flag with shit smeared on it? How about a child? Would that cross your line? Would you appreciate people trying to muzzle you if you expressed your feelings about images like that? I think not.

I agree with Wu-man, hate and ignorance is what I see too. It was designed to evoke emotions for sure. It’s in the gray area of what is considered appropriate to post here imo. The artist expressed himself publicly (here -not c&c section btw) and people SHOULD post their feelings about it if they want. It goes both ways. To champion the artist’s right to free speech while telling the audience to shut up is irrational. If you don’t like it then don’t read it, but don’t try to muzzle people.

About the work itself. Man, it could have been so much more powerful if you would’ve put more work into it! It’s just thrown together. Lazy artist indeed. You should start over and make it all it can be. I still wouldn’t hang it over my fireplace (LMAO at that one!), but it would go into my gallery folder. This one is too crappy looking, I wouldn’t want to show it to anyone.

Btw you’d probably sell a ton of t-shirts if you put this on cafepress, crappy looking or not (lots of USA / Bush haters there looking for stuff like this).

i like the effect with the uncle sam/skull thing-it looks really cool.

Well this has me depressed.

On the whole, I like it. It certainly seems to have stirred up a little debate, which good art should do, I suppose. The uncle sam image looks pretty pixelated, though, and doesn’t blend in too well with the background.

I take the criticism of the pixelation of Uncle Sam fully - I didn’t focus on it very much, and this piece was rushed, so the quality did suffer. If that says something about the artist, so be it - I just got to a point where I considered the art sufficiently complete to portray my thoughts and decided not to work on it any further.

And sorry for the controversy it created - certainly wasn’t it’s direct intent. I’ve been researching social stratification for English Extension and also watched videos like What Barry Says - and they’ve all influenced my thoughts.

What Trevor says is very accurate. It can be interpreted many ways. I don’t believe in stemming anyone’s expression of their opinion as long as they do some in a calm way.

For the message, America, like many other countries, is an oil economy. Without the oil, bad things will happen, hence why they use their military might to ensure their standards of living. I’m from Australia and our country mirrors many political ideologies of American policy, and will suffer the same shortcomings. In fact, Australia has the highest greenhouse pollution index per capita of any country.
If we don’t change our ways the effect will be felt the globe over.
We’re stuck in by this Earth (recognise the cage Uncle Sam is in?) and if we wreck it - game over.

I won’t discuss it anymore for fear of causing more offense.
But once again, I’m sorry for any offense I did cause…
I just had to let it out, refine them down from abstract thought and lock it down on paper…

You might want to choose better info sources than …Barry. Just because it’s online doesn’t mean it’s true. You could also spend more time looking for the “good” in things. It seems your sources are very much one-sided. I can’t even begin to enter a real dialogue with someone that clearly doesn’t know the subject matter. Good luck.