I have this character Amy (see thumbnail) who demonstrate exercises, each animation I try to make a bit more accurate.

For the movie (780 kB) I key framed the armature and keyframed the barbell;

Thus the barbell is merely following Amy’s hands - how do I make Amy actually grab the bar with both hands so that when I move the armature the barbell follows. 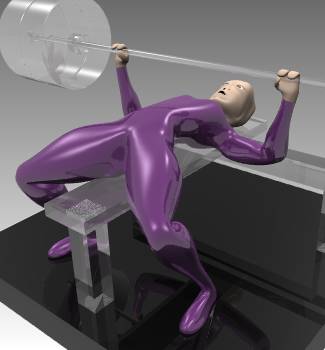 Parent to bone?
(select bar, select target bone (your armature should be in pose mode), hit ctrl-p and choose bone)

For a more complex situation (picking up the bar) try the copy location constraint with keyframed influence.

Edit: Oh, and that is a pretty cool animation

she looks a little robotic though. The eye blink is nice, but some squint or buldge would be nice too. Personally I would add a more defined nose, but it works as it is. Next lets see some buldging muscles! (check out driven shape keys)

Parent to bone would work for dumbbells but for the barbell any slight bone rotation or movement laterally transfers to the bar - the bar needs to stay centred and parallel to the ground; the hands need to stay the same distance apart.

Yes a nose and ears would be next for the mesh.

Attach Amy’s hands to the bar, then animate the bar.

The breathing looks nice, but the arms aren’t very convincing. Make them look more like she’s stressing to lift the load.

Orinoco: Duh! Good comment. That is the obvious way to do it.

It doesn’t seem possible to constrain a single bone joint to the empties - all that happens is that the entire armature follows the empties.

Add a couple of bones to the bar, at the hand locations, then lock their rotations. (Or not - a little wobble would add to the realism.)

[BTW: what are those weight plates made of? Styrofoam? If they are supposed to be iron, Amy is benching over 400 lbs!]

Create an empty for each hand position, parent the empties to the bar, use copy location constraint to constrain each arm ik target to the correct empty. Move the empties to correctly position the hands on the bar.

The idea of using the empties is its much easier to fine tune the position of the hands on the bar.
If there’s alot of wrist rotation you may have to key that as well.

Using the copy location constraint also allows you to key the influence to 0.0 if you wish to let go of the bar for any reason.

It is possible to constrain a single bone to the empties. The constraint is applied to a single bone and the target is the empty. If its not working then maybe there’s something else affecting/constraining the armature. We’d have to see the .Blend file to check it out.

Have a look at my animation for animation challenge #32

Thanks people, I think I have an idea of what you mean. I did copy location constraint on one of the bones (an IK) which created what looked like an empty.

I realised that if I clicked on this created empty (rather than the bone) then I could parent it to the empty which is parented to the bar.

Great weightlifting movie of Ludwig - I’m going to play around with this copy location constraint then I will ask how you got that bar flexing so realistically.

Edit: Just realised I can instead directly parent the location constraint empty to the bar.

Thanks to McSmiffy I now have an understanding of how constraints work. I’ve learnt that things outside the armature can be used as IK solvers or constraints (in this case empties). These empties can then be parented to the bar so that I can move the bar which moves the arms. I also increased the IK solver chain to 2, a rather obvious move but it took McSmiffy to point this out. Also a single empty can act on 2 bones for example as an IK solver on one and a constraint on another.

I’ve also improved Amy’s physique - her torso and chest are smaller and limbs thicker. Also they bend better (no folding) - I achieved this by rotating the vertex loops out so that the inner side of a joint has more spaced out vertices and the outer side has more squashed up vertices when the joints are straight. Thus on bending the vertices become more evenly spaced.

Also they bend better (no folding) - I achieved this by rotating the vertex loops out so that the inner side of a joint has more spaced out vertices and the outer side has more squashed up vertices when the joints are straight. Thus on bending the vertices become more evenly spaced.

Would you mind posting a wire on this? It’s a perennial problem.

(PS. I think I liked the original Amy physique better…

Her face could stand some improvement, though. Have you thought of asking Wizard if you could use the head he built for Joan of Arc?) 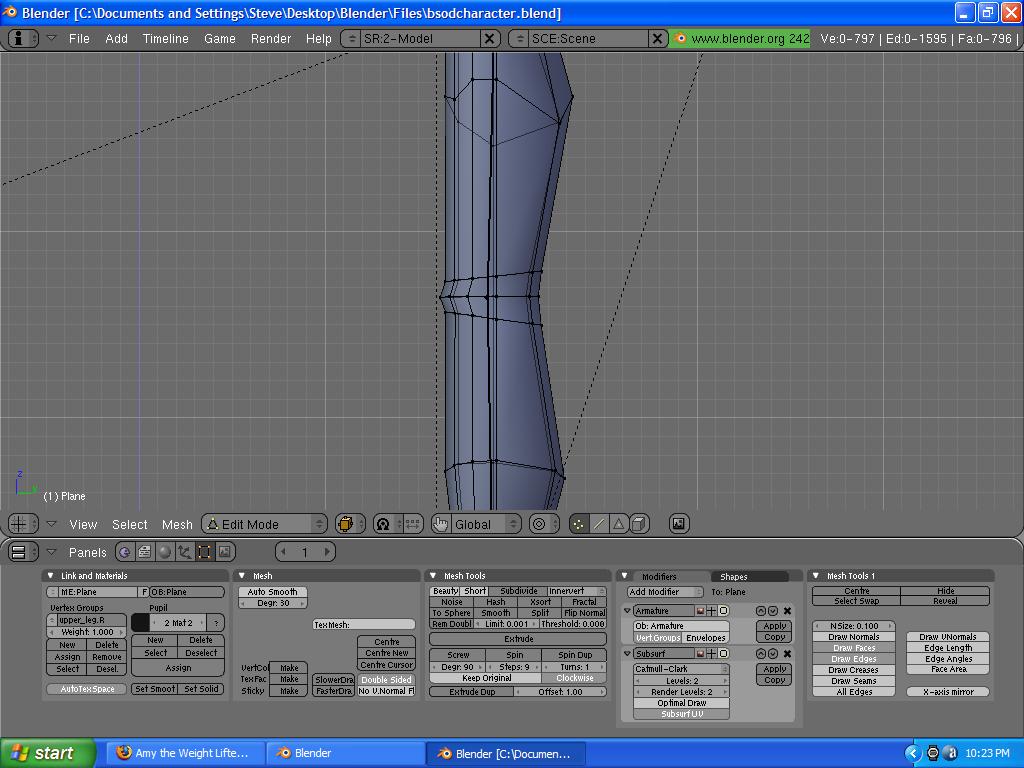 @Lord of the Rings: Thank you.

Orinoco here is an example of Amy’s arm as viewed from the top.

When the arm is straight the vertex loops are squashed up at the elbow - this produces the familiar elbow concertina shape.

The effect is as though the arm has been modelled in a bent position in the first place - I got the idea from someone who said model the rest postion in a bent position; I did this at first then modelled it straight again by mimicking what I’d seen when I posed the bent model straight. Its easier modelling a straight model and turning the vertex loops then modelling a bent model.

Lord of the Rings Junkie shows what looks like a knee, the outside of the joint has a pointy bit which I assume is the concertina of the knee.

It takes a bit of playing around with the loops to find the best position but the result is that Amy’s arm bends without the subsurfaces overlapping. 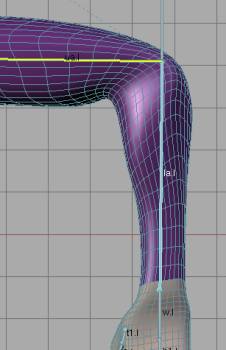