A piano I’m making, I’m trying to go around the 19th century…
Shadows disabled on lamps, using AO with both lighten and darken, approximate. 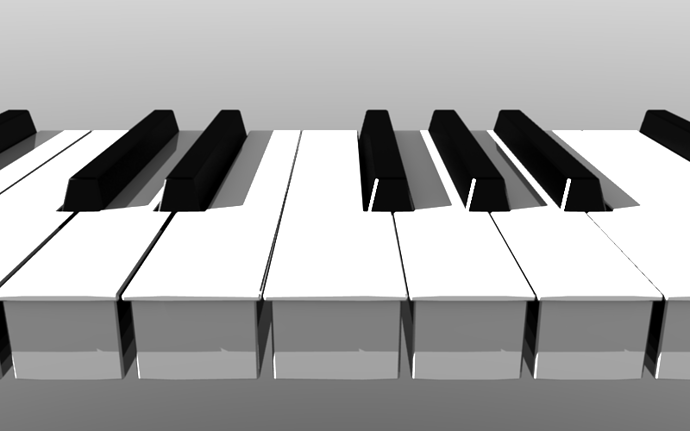 Hi? Is anybody out there?
(bump)

Surely you can find pictures? Mock up your own blueprints with a large quantity of graph paper, a good ruler, a pencil and several dozen erasers.

Is it an upright or grand piano?

A man who cannot find or make his own designs is doomed to only copy, thus he is but a shadow.

Yeah, but I don’t know what those holes are for… If I could only learn how a grand piano works…
Where are the hammers? Are those the red things? Why are there 2 “layers” of strings?
I “just” need to know how it’s built. Only then I can make my own design. Else, I’d be making
a completely different thing.

you could also take a camera to a music shop

or take a tour of a piano store (and ask them how it works)
or better yet, look on wikipedia

Yeah, thanks.
I found it, googling.

Is ebony wood used on pianos? (Not for the keys, but for the resonance box and/or exterior thing or whatever it’s called)

Other than that, I don’t think so. It’s too expensive, probably.

Edit: But Blender is free! Go ahead and do it–and add real gold trim while you’re at it! XD

Good work so far. I’ve played at least one piano I know is real ivory for sure, and they tend to get worn down, both in the center of the white keys (where they are played) and also along the edges.

Pianos have two layers of strings because not all the strings are going straight out from the keyboard to allow them to be longer (this mainly applies to the lower strings). Most notes actually have more than one string which makes the note (more volume, I’m assuming).

How it works… It’s complicated. Some piano stores have a cross-section of one key, and its a tricky crazy little mechanism which in the end allows the padded hammers under the strings to bump up and hit the string, then retract partway down as long as they key is held. Probably all you should really worry about modeling here are the hammers.

The dampers (the little black guys over the strings) will stay up over their individual key if that key is pressed (and held). They will all go up if the sustain pedal (far right) is pushed down. The other two pedals (or one) have other functions (to either sustain a select set of notes, or quiet the piano).

The… pegboard (?), which looks like a lot of silver dots in the picture, is a lot of square pegs mounted which are turned to tune the piano (the wind around the strings). The extra holes are like the holes in a violin or guitar: they allow the instrument to resonate more, making the sound fuller and better. The “red things” are strips of red cloth, like fuzzy felt, which I believe are used to dampen unwanted vibrations of the strings. They are woven (over, under, over, under) between the strings by tuners.

On old pianos the white keys are black and the black ones are white.

I think it would be cool to make it really beat up and on the beach with waves coming up to the legs (think: Lost)

That was about in the 17th century. And in the harpsichords.

Oh, I just read your going for 18th century, gotcha.

So they did look like this? Was the top cover always made of 2 pieces and not one for ivory?

How would I use the Array modifier? I know about it, had used it, but not all piano keys are the same…

Yes, it is 2 pieces. My grandparents have one.

You probably should look at the keyboard and the hammer (and associated mechanisms) as being separate objects, because the keyboard is so much more regular than the mechanisms (you see once the keys extend into the piano, they often angle off to a side).

I think its impossible to create only one key and use it for all of them (especially if you want good results), so what I would recommend is modeling a master key (should look like the highest key on the piano, a C – look it up!), and then duplicating, while linking materials, etc (but not a link which links the meshes).

Then from these duplicates, create the basic shapes you will need for the white keys: the low A (only one), E/B, C/F, D/G/A. That’s only 5 total (and only 3 to repeat)! Then start making an octave using arrays (piece by piece), and array that array to construct multiple octaves.The D/G/A array might be tricky, because there are 3 keys per octave.

Thanks, J09. Is the last key (no sharps/black keys around) in the ivory keyboard made of one piece?