I’m trying to create an animated arrow (similar to a cursor arrow) whereby the end of the tail stays at the origin and the head follows a curved path. The effect is that the arrow object grows in length with the head leading the way by moving along the curve. The tail grows longer as the head moves along the path, but once a tail segment is added (effectively pushing the head along) it is static and stays in place. So, at the start I have a stubby arrow head, and at the end of the animation I’ll have an arrow with a long, curvy tail.

I can make an object grow along a curve using a curve modifier and an array. The problem is the arrowhead. How can I have this arrow object grow a long tail and still have an arrowhead leading the way? Whenever I try using a separate arrowhead object moving along the path along with the growing tail, they get out of sync and one winds up leading the other.

I’ve seen this type of animation countless times, but I just can’t figure out how it’s done. Any suggestions? Any help would be greatly appreciated!

Use a separate object for the arrow head, see example blend file 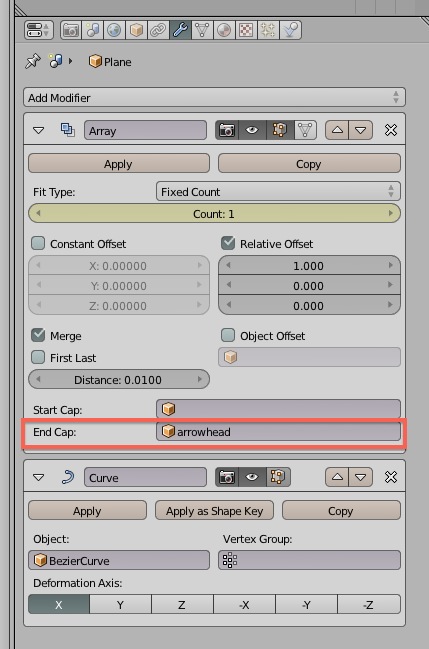 love it when I read a question an “my” answer is pretty much the same as the experts!!! really does me me feel as if I’m learning something

Use a separate object for the arrow head, see example blend file

It’s like you read my mind. This is perfect! Thanks so much!!!