Does anyone have some hints how to model a circumstellar disk, similar to e.g. here:
http://www.youtube.com/watch?v=Ul4qDHsYzC4&feature=related

I’d like to do it with particles orbiting in a force field, but I don’t know how to set up orbiting particles.

An alternative would also be a disk similar to the fly through here:
http://www.youtube.com/watch?v=65921QbIPVo

How do I set up these “density fluctuations”?

Thanks a lot for your help!

You could try making a torus with a cloud texture affecting the density of it. And then using IPO curves to animate the texture.

I just started playing around with Fluid sims, and it strikes me that a high-viscosity disc-shaped controlled fluid set up in “whirlpool” fashion might give you the differential rotation you need. Then you could convert that to shape keys and use the resulting animated mesh as a particle emitter using halo-type particles for the “dusty” look.

EDIT: That is, if the Fluid sim can be converted to shape keys like cloth & SB can – still experimenting with that.

EDIT2: Can’t get the differential rotation working – the fluid objects seem to react to a control mesh’s translation but not rotation, and rotating the domain is a solid-body motion, no fall-off with distance from the center. But some of the effects I’ve been getting are interesting so I’ll keep experimenting.

Thanks a lot for your ideas!

I’m rendering up my first shot at this overnight, should have something to see tomorrow. It’s not perfect but a start.

I know this may seems odd, but this icing file looks kind of like the example in the first video. Perhaps it can be used to make that initial shape?

I am quite interested in the shapekeys concept you mentioned. I did not know that you could convert a fluid sim to a single mesh with shape keys?

I I did not know that you could convert a fluid sim to a single mesh with shape keys?

I discovered that you can’t, since the number of vertices in the fluid sim mesh changes during the sim. It was just some “what if” thinking base on my experience with Cloth & soft body sims. Note the caveats in my edits to my first post.

In fact a number of my assumptions about this are being dashed – no differential rotation of the fluid system, either, which was my primary reason for trying it. Plus the Vortex field for particles, which can do differential rotation, also tends to fling them out from the system’s center, not good at all.

So far the test renders are looking only OK, not as good as I’d hoped, I’ll post the movie when it’s fully-cooked.

This is my first test rendering:

It uses a fluid sim to create the principle disc and generate some interactions between the orbital “lanes,” and a particles field with Vortex modulation for some differential rotation and more varied interaction between the cloud masses.

I think this test came out only so-so, as a proof of concept it barely makes it. The fluid sim rotates as a solid disc, which isn’t accurate, but this could be disguised by slowing its rotation by a large factor. Also you can’t do a fluid sim without at least a nominal gravity value, so the fluid system tends to drift along that vector even with ridiculously low G values.

The particle Vortex field also has probs, in that it does a good job of getting the particles to differentially rotate (although not very parametrically) but also (at least with the settings I’ve tried so far) causes the particles to move out from the center of the vortex field, eventually clearing the entire view of them at some settings.

The halo shaders used for the test are all additive and bright (like emission nebulae rather than dust clouds) but that’s the easiest thing to solve imo.

So, it’s OK for a first test, but there’s a lot of probs that need to be solved if it’s to work as well as I’d hoped. Maybe other approaches would be less problematic. 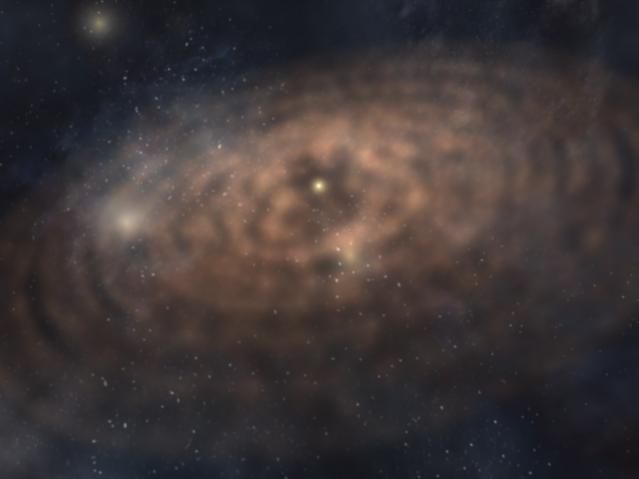 A few elaborations, colorations and a BG billboard help a lot.

Render time is about 5 min/frame (the fluid sim object, mainly), and I can’t use distributed rendering (the damn fluid sim, again!) so an animated version is down the road. I think I’ll put a camera fly-through into the action also, see how the system holds up under closer views.

My first impressions on watching your movie were that it would be nice if it all could be more in focus. It looks a lot like soft focus stuff.

What you might want to try on the escaping particles is to setup another series of field objects around the ring with an opposing force to resist against their escape vector. It might, at least, give you some more timing control.

My first impressions on watching your movie were that it would be nice if it all could be more in focus. It looks a lot like soft focus stuff.

Thanks, it’s a start. The disc should be fairly soft since it’s mostly gas and finer dust at this stage of a planetary system’s evolution, when planetesimals (generally about the size of asteroids) are just starting to coalesce, and the clear areas between orbital “lanes” are only starting to form. In the latest version (now rendering) I added some solid particles and one good-sized mostly-molten planetesimal to keep things from looking too out of focus and give a center of interest to the fly-by.

It’d probably be possible to add some “granularity” to the halo particles using texturing, but for now I want to just test this version in terms of how it looks when animated.

What you might want to try on the escaping particles is to setup another series of field objects around the ring with an opposing force to resist against their escape vector. It might, at least, give you some more timing control.

That would work if the force expelling the particles was linear and worked evenly over the diameter of the disc, but unfortunately both the vortex motion and the radial motion are differential – the inner particles start swirling and moving outward before the outer ones. Force fields outside the ring would push outer particles inward as the inner particles move out, just compounding the problem. What I need is to completely null out any radial vector, so the particles orbit in circular paths, but at varying velocity depending on distance from the center of rotation.

Looks already quite nice but I agree that it looks a bit like out of focus.

As I am still a blender-newbie, I decided to model a disk still image first with the could-texture influencing the density. This hint helped a lot!

I haven’t played with textures a lot so far, is there an easy way to make my volumetric still disk look more yellowish inside as it is hotter and closer to the star there and then gradually changing the color with the increasing distance to the star?

And one more question: how did you do the background. Is it an image or did you use the built-in sky feature?

Again: thanks a lot for your help!

Looks already quite nice but I agree that it looks a bit like out of focus.

Thanks. Yeah, that’s the nature of haloes, they have little or no structure the way actual clouds would. Might be able to texture them some to produce less blurry-looking results.

As I am still a blender-newbie … is there an easy way to make my volumetric still disk look more yellowish inside as it is hotter and closer to the star there and then gradually changing the color with the increasing distance to the star?

Only a newbie would associate “easy” with Blender

But in answer (sort of), much depends on how you build the disk to start with since different methods require different approaches to coloration and lighting. But I think Id try to use Lamps for this, as well as shader coloration. A cool bluish tint to the clouds made in the shader could be swamped in the center by using a yellowish lamp with limited distance and spherical inverse-square fall-off.

And one more question: how did you do the background. Is it an image or did you use the built-in sky feature?

That’s my all-purpose dusty space background plate, which I originally made for this image years ago (different 3D app which shall remain nameless on this forum): 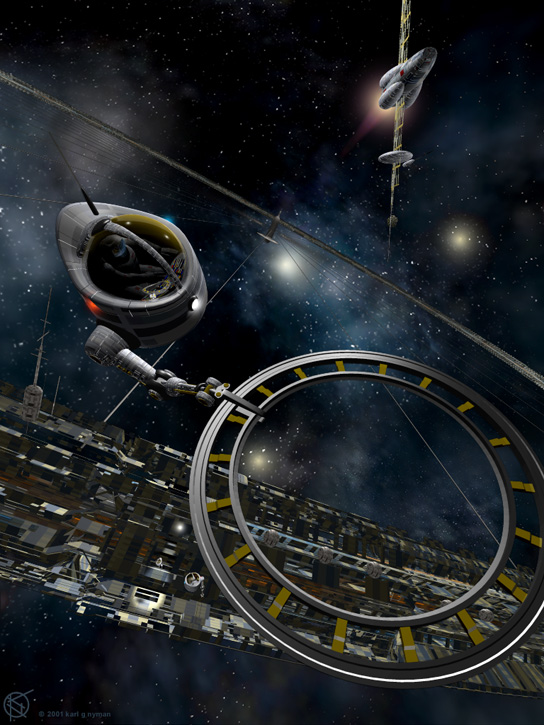 I also used it as the BG for my HALO (the video game) fan movie: HALO Genesis*1, made using the same unnamed app.

Finally got the rendering done:

The fluid sim idea was pretty much a bust, not really worth the effort to produce and the rendering time it requires given the final result. I think the effect could be done better with other methods

As it is, the model needs a more opaque, flat-disc component, but I’ll leave that for another time. The halo particles do a fair job of portraying a volumetric dust clouds component but the vortex field leaves a lot to be desired for creating differential rotation in the clouds. That field effect could use a lot more controls imo.

The current fly-through camera speed also disguises a lot of the slow rotation in the clouds, reducing the impression of varying rotation speeds and volume.

Altogether not a successful experiment, but sometimes learning from failures is valuable too.