Hi all,
I have a simple, yet probably basic, question.
I have a curve with lots of empties

For animating I need to select all empties (one by one, really a pain…) and insert keyframes. It is quite time-consuming. 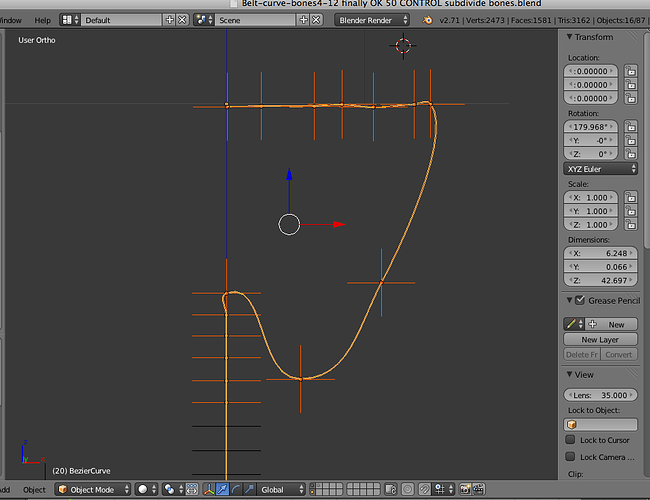 My question is how do I select all empties in a single step (like a+a for bones belonging to the same armature) ?

Thanks for your help

It does work but it seems to select ALL empties even if they don’t belong to the curve.
I’d like to restrict the ‘shift-G’ to empties belonging to the curve…
More advices ?
I thought of parenting all empties to a single one and animate this single empty. But I am not sure this will work fine.

select the empties that are needed. Press CTL-G and add them to a new group "(press F6 to name if you wish)

Yes it works. Great !
Thanks a lot

Daren,
With the same idea, can I save the position of the empties in a kind of library, like a pose library for bones ?
Thanks again

No. If I were you, I’d just make an armature and parent each of the empties to the bones. It’ll take 3 minutes and you will have all the benefits of armatures

Well I already have bones rigging a mesh (a belt). These bones are connected to the curve using the Spline IK modifier.
Empties are parented to the curve controls, not the bones.

I dowloaded Scales. Thnak you for sharing.
I must say that I don’t fully understand : tail_rig and tail_spline (with hooks) are completely independent.
So moving the curve (in Edit mode) doesn’t have any effect on the tail bones…
Maybe I am missing something here.
Please consider that I am still at the bottom of Blender learning curve…

The tail rig has two modes – FK and IK – if you select a tail conrol bone, you can switch it to IK mode, then it will be controlled by the IK bones (that look like arrows in a circle).

Woaww I am not sure I understand everthing but I see the idea of FK/IK between main rig and tail.
On a more basic level:
What would be the workflow to animate the tail, going from straight to, say U shape for instance (without moving the main rig) ?
Thanks