animating trasparency of many characters

hi guys, i am doing an animation with vectors (svg made in inkscape.) there are about 25 characters to animate and each character is made of 30 separate parts (legs, arms, hands, head, hair). i need to get the transparency of the materials of each character to fade out over time. i added the characters to a group named “people”. maybe with python this can be automated, i know that the code has to be something like: for elements in group “people” make transparent.
note:
i need to make this happen from frame a to frame b.
also using the blender internal.

ps
i tried linking the animation of the transparency but nothing changes.

To be honest, I think the best way of doing this would be either in the compositing node editor.

Put all your people in a separate layer(s) to the background, and make them slowly fade out in a node-tree:
Go to Render Layers and create a new render layer for the people.

You’ll see that the alpha over is keyframed - this will fade out all the characters on that layer. 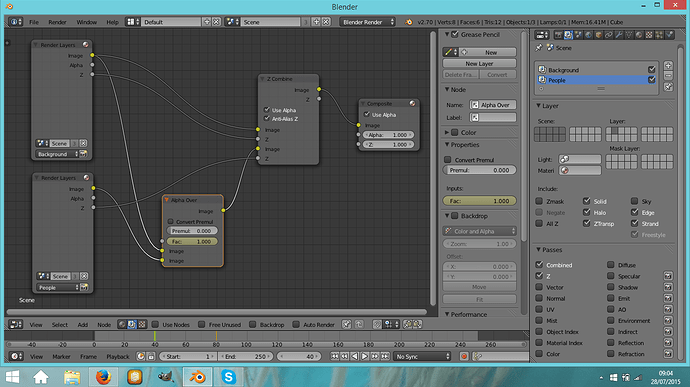 This will also have one advantage - I’d imagine these people are made of several objects behind each other - if you just turn down the alpha you’re going to be able to see all these objects that make up the object behind each other.

PS… that’s a lot of characters on screen at once!

thanks a lot for the help, cheers

PS… that’s a lot of characters on screen at once!

its for an explainer video against medicine patents, the people are to show a statistic.