I’m building an airplane model that I eventually want to animate. In order to do take offs and landings I thought using animated drivers for the wheels. So while on the runway the wheels have rotation drivers tied in to the planes postion. Currently the wheels are parented to the plane. In my test it works great, as the plane moves forward, the wheels rotate properly as well as going backwards.

The wheels rotate based on the position of the plane…but
Once the plane goes airborne the wheels continue to rotate because the planes position continues to move.

I can’t seem to find a way to tell (animate) the drivers to stop spinning the wheels once it is in the air. Can anyone offer suggestions on how to still use the drivers but have the ability to stop the rotation at certain parts of the animation

The easiest way would probably be to use an empty as the driver instead of the plane. Add a copy location constraint to the empty with the airplane as the target. As the airplane takes off animate the influence of the constraint to 0.

AlanK… that worked perfectly… thank you very much. My next task, is to figure out a way to use the new rigid body physics which would allow me to shoot a bomb mounted to the plane into a building… I’m having some issues with parenting and the new RB integration, but that’s a whole different set of problems. Thanks again for your help.

EDIT: Just FYI … when getting it set up at first I didn’t realize the tires were rotating in the wrong direction. There really isn’t a way that I could find (like setting a -x rotation) in the drivers set up windows. So I needed to flip the Z rotation 180 degrees of the tires to get them to rotate in the right direction. 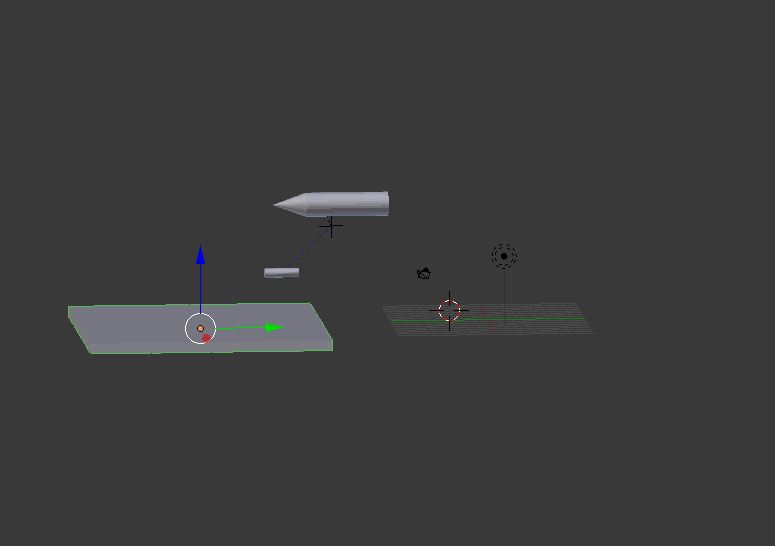 Well Alain… It kind of works, but the physics don’t seem right to me (although I haven’t dropped too many bombs before

The frame capture your seeing is frame 80… notice how the bomb is way in front of “airplane” I animated the constraints to be 100% at frame 59 and be 0% at frame 60… the bomb does release at frame 60 but as it falls it goes ahead of the plane while dropping. (it was postioned at about the location of where wings would be. I thought at first I needed to crank up the mass of the bomb, but that didnt seem to work. When the bomb hits the ground plane it does seem like the physics are working on impact.

But I would have thought the bomb when released would pretty much just drop straight down. I’m sure there would have been some forward motion, but not like it is.

Just a quick note, this is a version of Blender that was on buildbot about a week ago. I read somewhere in the bullet integration thread there was some issues with animation, so I dont know if that is coming into play. Going to download version from today and see if any difference.

Any thoughts by you or anyone else would be welcome

Just an update… I downloaded the new buildbot from today… originally brought my old file in, had the same problem as noted above.
Created a new file and started the test over and the bomb is now dropping as it should. Perhaps something was changed, but it is possible I screwed up somewhere. But what was occuring is that even though I keyframed the bombs animation to OFF, it was still acting as it was animated. Bombs away and thanks AlainK for your help.