Hi All!
I have searched and searched for help on this but not come across it yet. I am trying to work out how to put all my different actions into a smooth animation with different camera angles cut together etc.
I can creat individual actions in the action editor andcan ‘sort’ of get them to work together in the NLA editor. Problem is I can’t work out how to string it all together. eg walk along, look down at chair, sit down etc with different camera shots etc.
Can anybody recommend where I can get some simple advice please? I have the Tony Mullen book ‘Introducing character animation with Blender’ but it seems to stop at just creating walk cyles with a wave etc. I just cant work out how to progress further and turn the parts into a sequence of movements, scenes etc.
Apologies if this is an old question but as Im sure you all know - gathering all the required info together is’nt the easiest of tasks.
Once I’m sorted with this I will have to make a video tutorial to help others!!!
Thanks in advance
Mutleee

This is a wierd part ob Blender, indeed because there are “hidden” modes inside the NLA itself. What you have to do is click on the icons that appear in the NLA, this changes the mode of the window. Also you may have to right-click on that solid bar long the left of the NLA to add an action initially.

thanks for your reply. It’s not the most intuitive interface is it!!! Im ok with the action icon and nla icon in the nla editor but it’s just about everything else!!! lol
I need to find a really simple step by step walkthrough for the actions I described above to really get it in my head!!!
Anyone live in UK want to spend a few hours teaching me? lol I can help out with after effects but thats about it!!! lol
cheers

Hey mutleee, you’re not alone on this. It’s been a huge involved process trying to
uncover the mysteries of how NLA and Action editor’s relationship works. I finally
got the jist of it.

See the screen shot. One thing that was confusing to me was in order to
get the strips to work, before adding an action strip to the NLA Editor,
you must first make sure the main…object/name/thing (where the red
arrow is pointing to) is selected. Not any of the indented ones below it
(where you see the black dot). So that dot should be where the red
arrow is. THEN press “Shift+A” to choose an action to at.

Also pay close attention to which one is selected when you make any
kind of edits to the action. You can still edit them while in NLA mode.
The only difference is in the Action window, the key frames will appear
on the same frames they appear in the NLA editor (where ever the NLA
stips might be located along the timeline). Also note: if you move those
keys around while in NLA mode, it will also change them in Action mode.
So just keep an eye on this while editing or things might get a little mixed up.

If the an action is not moving
when you press play (Alt+A), it could also be because it’s in NLA mode…
which would be because the timeline coursar is starting at frame one and
the action starts at frame 50. So just clicking the little icon in the NLA
will put your action back at frame one without effecting where it is along the
timeline.

In order for them to blender nice, for example: A walk cycle and a wave, and
the head looking around, etc… keep in mind the order of the strips since
lower stips overpower the ones above them.

To have more control over what moves, while create actions, try to be in the
habit of only keying the bones you need to move. I used to press “A” to select
all and then “I” to key them as LocRotScale style. Bad idea.
So just key the rotaion of a bone if that’s all it’s doing, etc…

Um…what else, what else…OH yeah. Camera movements. Maybe there
is a better way, but for make it look like the camera is cutting to different
angles, make sure to have a start and end key set. The next frame after
the last, move that camera to a new position and key it. So it will instantly
be at the next angle. You will have to go into the IPO editor and get used
to editing them curves if you want it to look right. By default, when you
key something, it is a Bezier curve. So a key might effects a previous key
in a way you don’t want. Learn the different handle types, Bezier, Vector, Free.

So first select the curve, then TAB to edit. Select a key then make adjustments.
H = Free (so you can adjust handle independtly)
V = Vector (which could be thought of as linear curves (where they become strait)
and so on.

Oh, plus. Shape keys were a little confusing to me too because I could not get
them to stay with any action strip that I keys them in while in the Action editor.
Instead, they seem to stay independent of the strips. So you can move an
Action strip around, but the Shape keys will not follow. They stay where ever
they were when you sent them on the main timeline.

(Holy crap this dog keeps farting and I’m gasping for clean air!!! I hate it!)

Some things, like the camera and any other object that does not have a
posable armature, can just be keyed on the main timeline too. At least
that’s how I usually do it. The picture kind of displays that. You see
keys for the camera, but no strip.

It can seem daunting, but I encourage you to keep at it. Answers are out there.
The people that are determined and have a butt load of patience are the ones
who find success even when walls stand in their way.

If you can stay calm and learn Blender even when things get hard, you’ll become a
professional problem solver, which can also help you stay calm when life outside of
3D throws crap at you.

I hope this is helpful in some way. 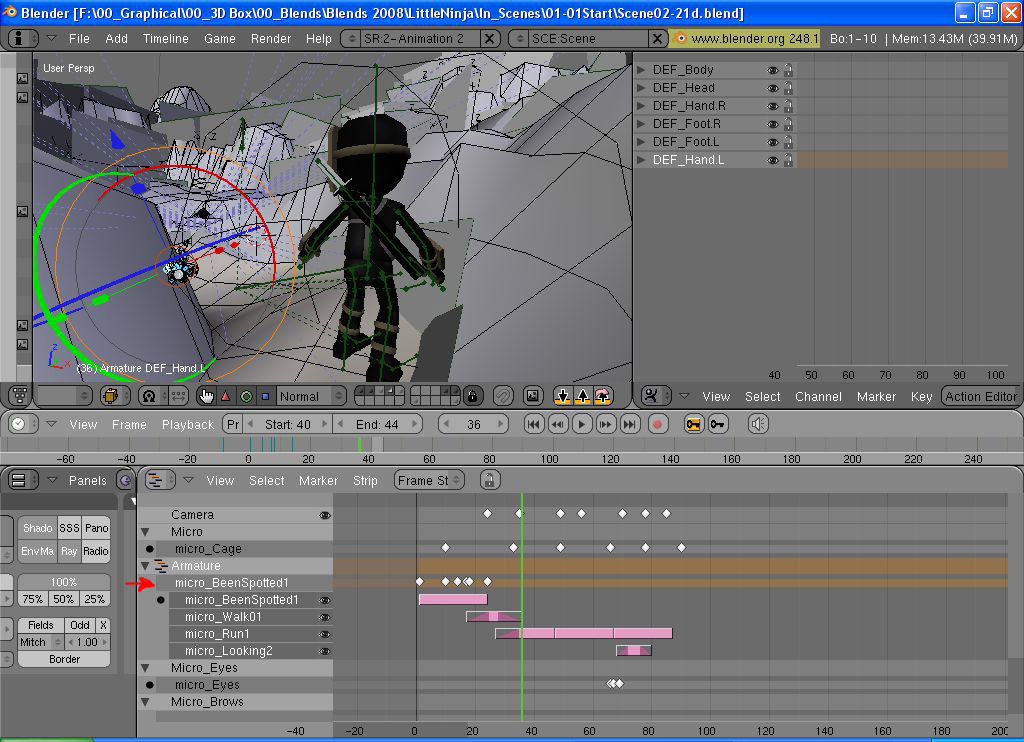 Ghost_Train - many thanks for your answer. everything you said makes sense. I think it is just a case of doing again and again till things become clearer and set in my head. Thabks for the advice - it was clear and hepful.
I appreciate you taking the time to help.
Cheers

I’m still stuck on a few things too that have to do with the NLA Editor.
I know there are some things that are just unpolished all together.
I’m hoping future versions of Blender will make this process easier
to manage.

Good luck with your animation.