I’m having a problem with an animation that I’m working on. I’ve got two figures fighting each other and I’ve made about 10 seconds of animation.

Now, about a week ago, for no reason, the animation seemed to start playing at about two thirds of its original speed. Looking at the “Anim” options panel, I could clearly see that it stated the animation is to run at 25 frames per second, but I have timed the sequence with a stopwatch and it is definitely running at two thirds of the original speed.
Now, I wanted to solve this problem, but I was also working on the scene itself at the time, and deleted one of the models and its associated armature. After importing a fresh character and armature, I hit the play button and found that it was going at normal speed again (the model and armature was exactly the same as the one I deleted).

So, I simply forgot about the problem… until just now. The animation has suddenly decided to start playing at two thirds of its regular speed again.

I am working on a 3ghz dual core Athlon machine with 4gb of memory with no resource-consuming background software, so I am pretty sure that it is not my PC slowing down. I am using Blender 2.49b.

The strangest part about all this is that I haven’t even attempted to change the rate of the animations - I don’t even know how!

Has anyone else had this happen to them? Can anyone give me any idea of why this is happening? More to the point, can anyone tell me how I can fix this - permanently! - so that the animation plays at the frame rate specified?

Try making sure that any subsurf modifiers are disabled in the viewport. I had a similar problem and it turned out disabling sufsurfaces sped up animation dramatically.

This has happened to me in the past and the problem somehow went away all by itself. But now it’s back, and I would really like some insight into WTF is going on

What kind of graphic card to you have?

Is this a already rendered animation / already saved to file ?

@ropsta: My card is a GeForce 7600 GT (got the card about 2 years ago so I can’t remember the exact name). But this problem has nothing to do with my graphics card.

@kazinger
No, this is an un-rendered animation that I am still editing. I am merely playing it back within Blender. I can clearly see “FPS: 25” in the “Anim” options panel but when I play the animation I can clearly see the frame count rising at a speed of 10 frames per second (I timed it with my stopwatch and got 100 frames in 10 seconds - it should be 250, I don’t know why it only got to 100 in that time).

Sorry I was off base ( thinking the wrong thing ) maybe you can load it in 2.5 to preview . But if you want to look edit , look edit…over and over that’s too much work. But maybe till you figure out the problem.

Pull down the top header to expose the user preferences window.
In the “View & Controls” tab, all the way to the bottom left, make sure “Playback FPS” is enabled in the “Display” section of the prefs window.

Now, go back to your scene and hit “ALT+A” to run the animation.

What framerate is displayed in the upper left corner of the viewport?

@ropsta: My card is a GeForce 7600 GT (got the card about 2 years ago so I can’t remember the exact name). But this problem has nothing to do with my graphics card.

Please stop telling us what the problem is not. The issue may not be with your graphics card but it could be with the drivers. Without this knowledge we are shooting the dark.

Next to FPS in the Render tab there is a frames per second base. It should be at 1.00.

The reason why I said that the graphics card isn’t the problem is because the animation was running perfectly fine beforehand, and then one day started running slowly and in that time I never changed my graphics card, drivers or Nvidia control panel settings. I have recently updated the drivers just in case, and I am still getting the same problem.

Interestingly though, I have tried running the animation on my laptop and it seems to run just fine there.

I did as you said and I got a really low framerate of just 4 frames per second. Interestingly, however, the actual speed of the animation seems to be correct, despite only displaying 4 frames each second. But when I play the animation using the play button on the timeline window, I get a MUCH smoother animation… played very slowly

If anyone has any further suggestions I will be eager to try them :s

Oh and one more thing… I tried to do a render of the animation, and it seems that the render comes out at the correct speed AND framerate. Which is great news, but I would still like to know why it plays so slow when hitting the play button on the timeline window :s

Simple…
as the readout I had you turn on says… your hardware is only playing the animation @ 4fps. The reason it looks like the “correct” speed is that the viewport renderer is dropping frames to make up for the difference. Although, I’m not sure where it is… blender, or your vid card driver setup, or both… there may be another option to “drop frames on playback” in the viewport that works when you Alt-A, but not when you hit the |> button

check the Sync Playback option. See image attached. It is a processing problem. The final render is okay. 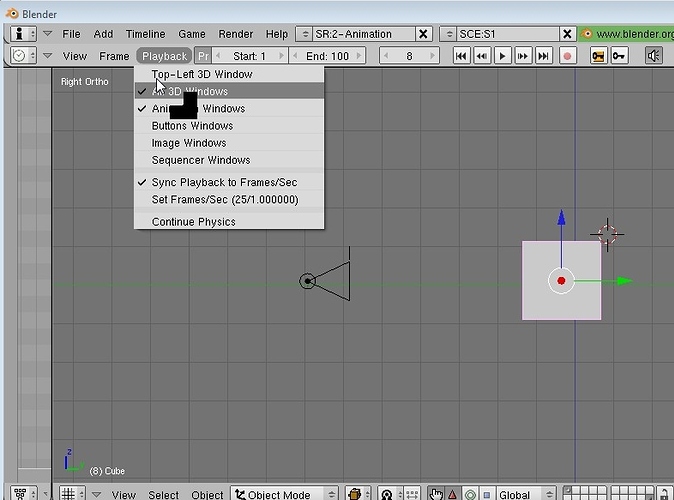