Hello all you lovely people! So, I have a bit of a dilemma here. I have this model that I made in a separate program, and I’m trying to figure out if it would be possible to export it into blender and animate it. The only real problem I think I may have with it is animating the arms and legs (especially the arms) since they are attached to the body. So, my question to you is, how exactly would I go and animate the parts without it all falling apart? I’ve tried looking up tutorials on youtube, but none of them deal with something like this. Thanks in advance! 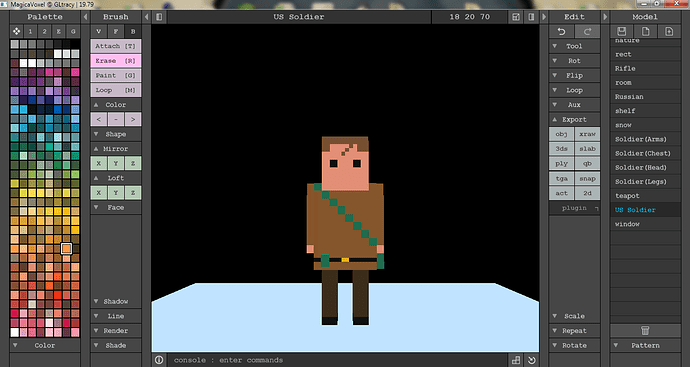 It’s up to GL Tracy to write an exporter into MagicaVoxel that exports to common formats. .obj should work.

It does have a exporter to obj. The thing I’m worried about is how am I going to animate it without everything looking deformed.

Bring it into Blender first and then we can help. It looks likely that it will come in as a bunch of cubes. It’s to be hoped they won’t share vertices.

I guess you gonna have to edit the mesh to fix the parts that are attached. Or just redo your model in a pose that has no surfaces touching (depending on how you’re gonna animate it, perhaps it would even make sense to actually model each part as individual components and put them together in Blender).

Thanks for the responses. So Tiago, if I were to separate them into different parts, would I put them together and then animate them, or would I animate the separate parts and then somehow combine all the animations into one?

If you aren’t gonna make anything flexible, just parent each part to a bone in an armature and animate the armature.

But i get the feeling you might be very new to Blender. Perhaps someone more well informed than i am could point you to some nice starter tutorials on editing stuff and rigging and animating characters?

I know the basics of rigging and making animations, but the whole parenting thing is a pretty good idea. Thanks!