My 4th time modelling my character Ayami, this time around in Blender.
Short story: yesterday I was going to re-model her once more in 3ds Max 8, but this time following the ‘Stop Staring’ tutorial by Jason Osipa. So. I put down two pics, each 36kb apiece in the background of 3ds Max, and proceed to outline them with Splines.
Then Max crashed!! I don’t know what the heck caused that to happen, but it happened twice on me(spent 20 minutes putting down splines, shoulda saved) and got me upset enough to model everything in Blender. Blender hasn’t crashed once.

Okay, down to the point: I want my character’s face to be more proportioned like a Final Fantasy 8 or 10 character with Asian eyes, but I’m not sure where to take her next. How are her proportions now? What about her eyes/lips/nose/forehead?
Pics:

Help is greatly appreciated…I’m planning to start on her body as soon as I’m satisfied with her her head [whenever that is].

I dont know. I think the eyes are a little too big. Anime or not, the head will look much better with smaller eyes.

I think the eyes should be the same size or larger. Maybe shrink the Iris a bit. She really needs some ears, its hard to judge a head until all element are in place. They play off of each other. And you could remove a lot of vertices. You have more than you need. Unless you want to export it it to another program than you have a good amount.

Do you have reference pictures of this character?

That looks like a good head, but I can see some triangles in the forehead, and the side of the head.

The back of the head has a nasty pole. You can see what it should look like at http://www.subdivisionmodeling.com/forums/showthread.php?t=907

study, study, study, and think how have the characters in ff7 been made allso google for some images to study from! notice the shape of the eyes!

and remeber reference is your friend ^^ 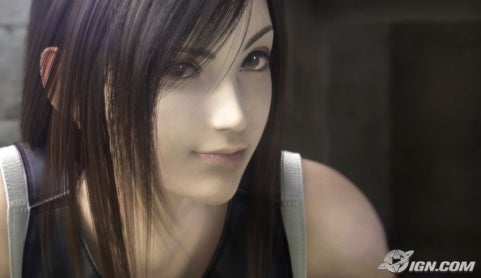 Don’t be afraid of triangles. Some of the best modellers out there have triangles in all kinds of places people’d tell you is a sin. Just be aware that if you get odd pinching when you animate that’s the reason.

Now that being said, figuring out the areas where pinching will occur most is important if you plan on animating her. I’ve circled a few where I’d remove triangles:

I second Womball’s note about it being too poly-heavy. I’d throw a subsurf modifier on there if there isn’t already one and see how many loops you can remove while maintaining the overall shape.

Forgive my crappy drawing, but that shows the two styles of eye I prefer along with a relatively anime-proportion face. If I were you I’d grab a few Boondocks books (or the show, as it shows the characters in motion), along with some Cardcaptor Sakura.

Anyway, the model itself is quite nice, but more towards the realistic-toon. One final thing: I’d raise the cheek bones.

study, study, study, and think how have the characters in ff7 been made allso google for some images to study from! notice the shape of the eyes!

Actually Square was going for a less anime, more realistic style in Advent Children. The original FF7 movies were anime-styled, with huge eyes and small mouthes, but the new Advent Children models (while somewhat exaggerated in many ways) offer characters who look very real, and in many cases very Japanese.

well yeah i guess youre right bout that but eaven then reference is good so search for the right reference.

Just made an update, been working 3 hours on this character–eyes are smaller, altered the back of the head a bit, made some squares, shortened and further adjusted the nose, added eyelashes, and sharpened the chin a little (anyone remember ‘Yet Another CG Girl’?). I also deleted the neck to make way for a new one. However, I’m not happy with the shape of the face. I want it to be somewhat childlike(though not as much as what the japanese seem to prefer), but also mature enough to reflect an adolescent girl, the character here being 15 years old.
I should have elaborated earlier on the look I’m going for…this character will be used in an episodic animation, one with a look inspired by Squaresoft(characters realistic but still a bit Anime), architecture (lots of chrome, glass, and plastic shaders on artificial materials), as well as a bit of Apple (black and white contrast).
BTW, thank you for the tips and links…I just saved that Sub-D modelling site; it will really come in handy for this current project.
I think I have the eyes about where I want them, but the eyebrows will definitely require some work.

Any tips for improving the front view of her face? Should I shorten the nose anymore?

I should have elaborated earlier on the look I’m going for…this character will be used in an episodic animation, one with a look inspired by Squaresoft(characters realistic but still a bit Anime), architecture (lots of chrome, glass, and plastic shaders on artificial materials), as well as a bit of Apple (black and white contrast). However, I’m not happy with the shape of the face. I want it to be somewhat childlike(though not as much as what the japanese seem to prefer), but also mature enough to reflect an adolescent girl, the character here being 15 years old.

Sounds like me after I decided on which style to use on my models, but without the Apple touches, and the girl will be around 17-18.

Although, I’ve been working on mine for half a year, or more, and the face has went through many, many revisions. Including starting over from scratch a couple times. Applying the “lessons” I had learned when making/working the previous revision. I also spent a month or 2 going back & forth between Toon Shading, and “kinda realisitic” shading, “generic” 3D shading for an hour or so per day when I got the chance to work on her. She’s still just a head with experimental particle hair. :o
Although, I’m thinking about switching to the “card” hair method, so that the hair doesn’t slow down the rendering time by 3X. :eek:

!!Link is broken of Images!!

I see the images, now. It’s definately coming along good, and looking Anime-like. Wide eyes, thin nose, and
mouth. Although, maybe it’s the lighting, but the shadows kinda makes a spot in the front, and where the
front, and sides of the face meet look a lil’ flat.

Although teenagers are an ackward age to model. Since some still look child-like, and others could pass for
adults. Just depends on their genetics, and which parent they take after more. I know about that, 'cause it
happened to me in reverse. For years after I graduated high school. People still asked where I went to
Jr. High or High school. :o

Now I can see the images:
Nice Job! Keep it up! Try to get the Final Fantasy result;)!

Anyone have a solid tutorial available for alpha-mapped hair? Odd that I’m bringing this topic back up but I figure that those who were replying to it had interest in that style.

Well try this thread… http://blenderartists.org/forum/showthread.php?t=42936&page=3&highlight=shinobi It’s got some good ideas… I just haven’t tried em out yet… Although I resorted to making my character’s eyelashes out of particles, 'cause the alpha mapped ones never looks “soft” enough…