Hi, this is my latest 3D model - Anna, a beautiful young lady. Please tell me what you think about her - modeling, textures and everything that comes to your mind. 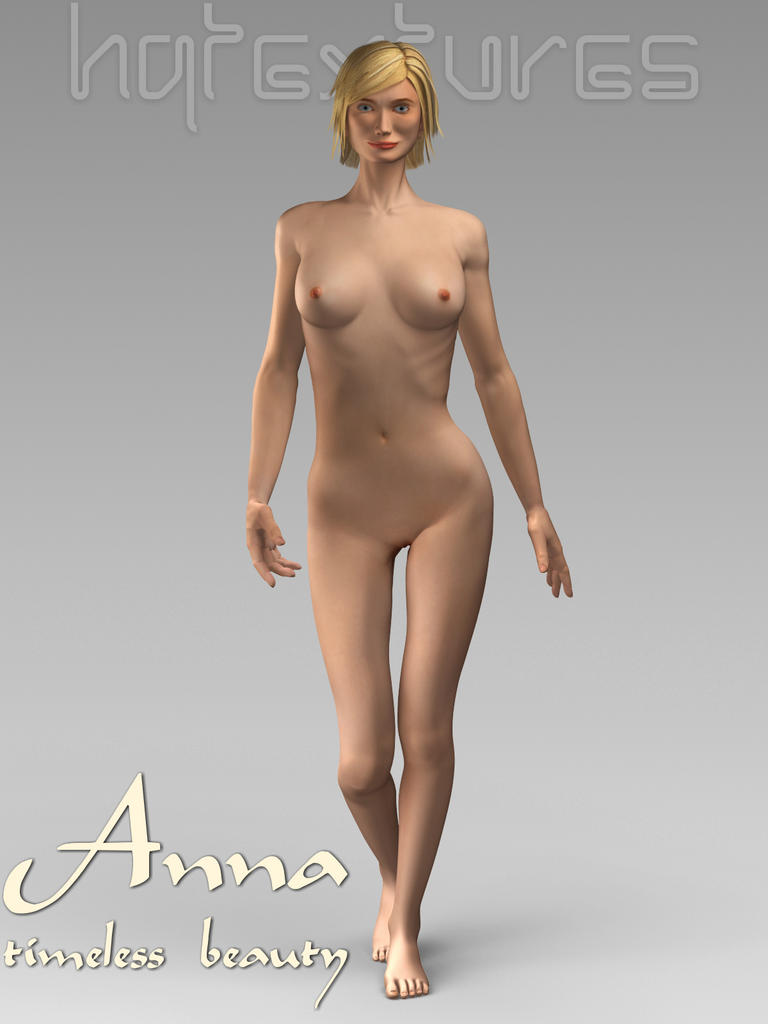 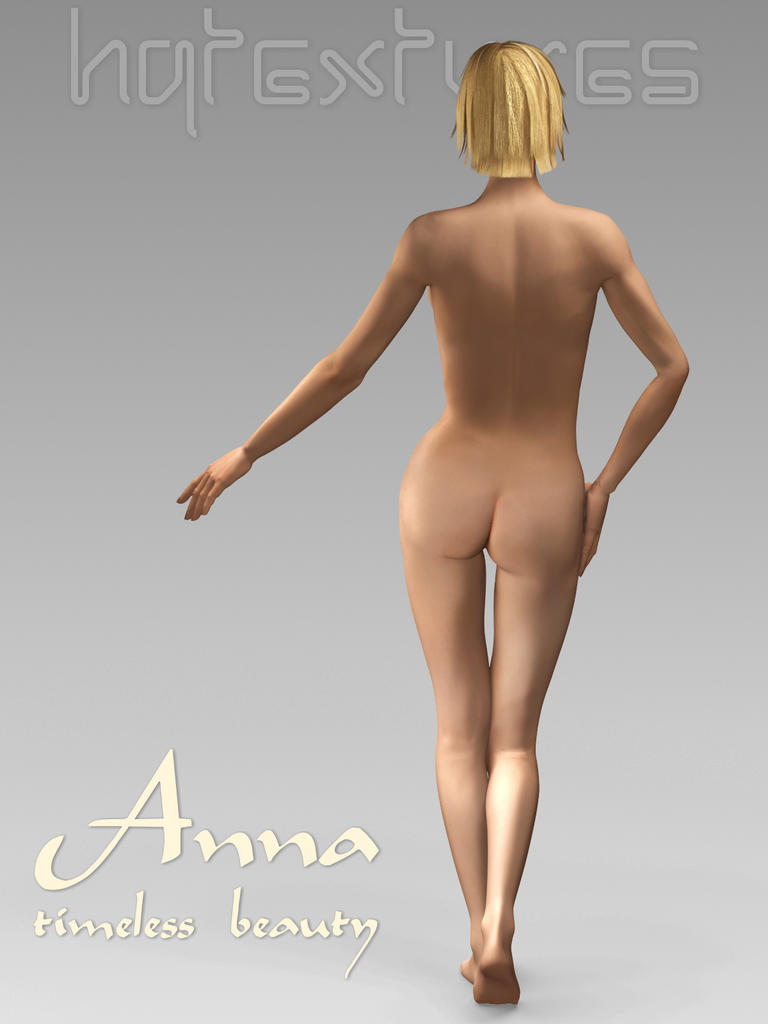 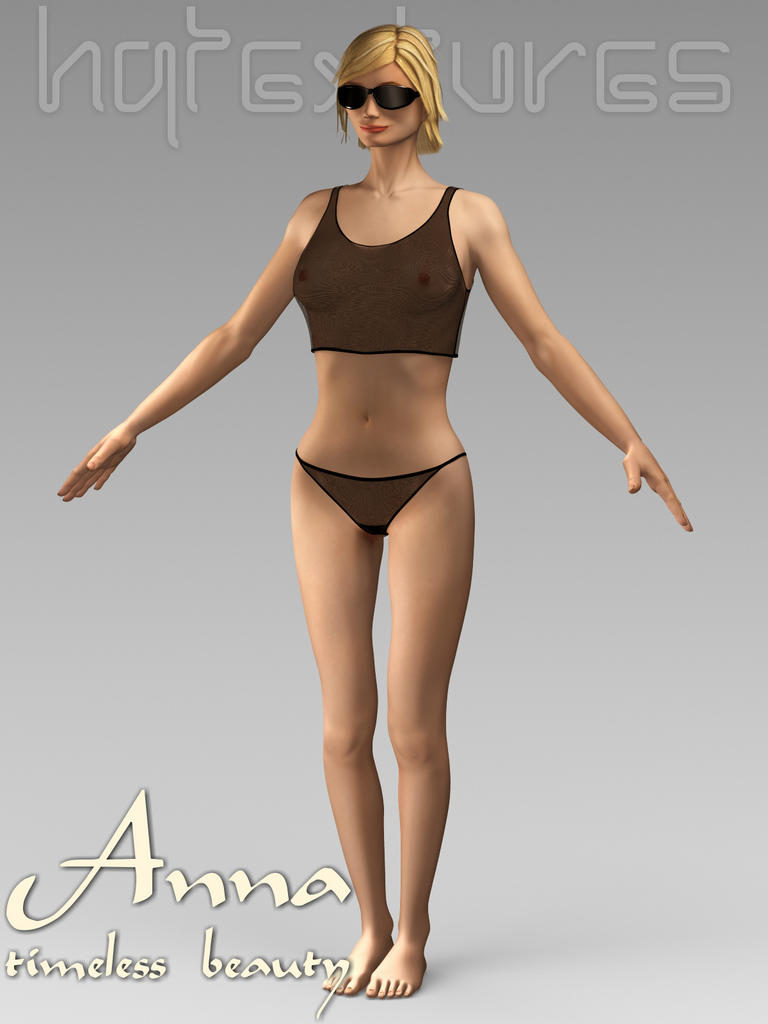 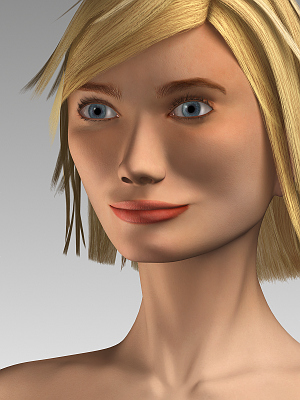 I have the feeling that several parts of her body have the wrong proportions. It’s an overall feeling, so it’s hard to tell exactly what is wrong, I’ll try anyway but maybe I’ll make mistakes:
Her head seems too small compared to the body.
Her shoulders seem a bit too wide - but maybe that’s the tiny head that gives that feeling.
There’s something wrong with her leg lenght. I think that it’s the shin/calves/whatever-is-the-name that are too short compared to her thighs.
Well … her upper body seems to be at a different scale than the lower body. Like… legs and bottom at 1.0 , and torso/shoulders/arms at 1.1 (and head at 0.9

)
On the back view, her bottom looks like it’s very flat. (no side view so it’s hard to tell)
Her face could be improved. Her lips looks very streched (maybe you wanted to do Julia Robert’s mouth?

) and the “relief” of the lips looks a bit weird, but once again, it’ll be easier to tell with a side view. (Same for the cheeks).

Appart from that, I’m amazed at the hand/arms/neck part, the modeling there is very good. (The rest of the body too - appart from the little porportions inconsistencies - but for some reason that’s the arms that impress me the most).

you have mentioned exactly the areas that I myself had doubts about already, but I have looked at her so long, that I couldn’t say anymore what is wrong.

Here is a side view of the head.

I’d like to hear more comments and after a break of a few days will try to improve the problematic areas.

Thanks for looking at my model! use an alpha map for the hair its makes it taper at the ends making it look much better.
In the material for the hair, make a texture and have a colorband with White at one end, and alpha at the other. move the white closer to the alpha to get longer hair.
Hope this helps

This is a big help if you want to improve your face, there are many other tutorials, some better but this one is good although the diagrams are a bit basic.

I know exactly what you mean about looking at something too long you cant see any problems, at uni we were told to take our drawings to the bathroom and look at them in the mirror! although it dose not work if you have something that is symmetrical.

The first thing that looked odd to me was the body it is too wide the groan looks square and has no depth.

To me it looks like a classic case of working off of reference that has prospective distortion! It also looks like you are modeling it of a front and side picture, you need to remember that if you follow just those two images you will get very square and flat features. find some three quarter view reference.

Here are some reference I use,I dont know where i got them from so i cant credit the artist

but there not mine! 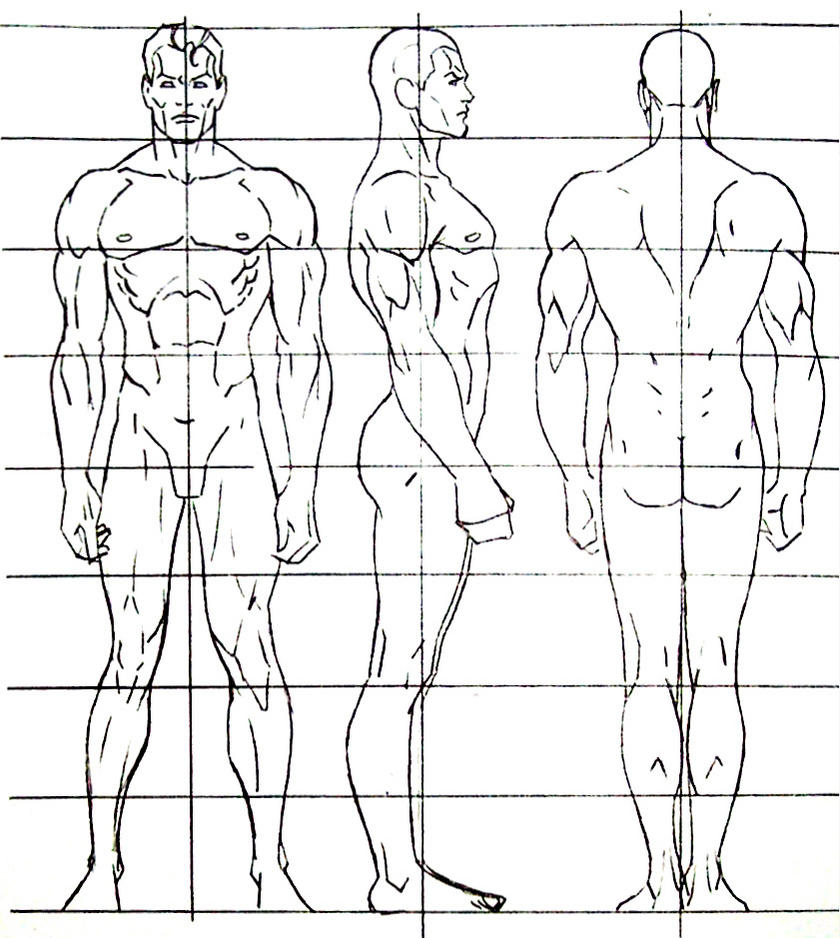 It is very nice work, it just needs some finishing touches, I think. But before you do so, you should take a break for one week or so. At least it allways works for me (not only when I am modelling in blender)

Btw. I am quite amazed by the ribcage, I like the detail very much.

Anyway, here are my observations (apart from those mentioned previously by other people):

I want to say that these remarks are very subjective and I may be wrong, but I hope they will be helpful anyway

nice job on this model so far… do you mind posting wires?
The head does look a bit small compared to the body. The chest looks just a little too wide. Thighs look ok until they attach to the body, then things look too flat between the navel & crotch area.
The top part of the face looks boxy n flat, and the corners of the mouth and the mesh around them are pushed too far back, she looks like she’s supposed to be smiling. I’m thinking the neck is too skinny, compared to the body, and in the 3/4 view of the head.
The shape of her eyes are making her look shocked… could try to give the upper lid a more natural relaxed curve as it goes down to the outter corner of the eye.

I agree with what others have said. I think with some tweaking your real close to a realistic model. The head seems to be like the area that requires the most tweaking. For example, the nose is really large. I just finished watching this last night:

You can watch them for free or pay to download all the videos. If you download them you get the blend files to study from. One tip I learned was while your doing final tweaking to turn on perspective view and that gives a better sense of how it realistically looks. Hope that helps.

The lower abdomine could use some defining curvatures where it meets the hip.

Thank you all sooo much!!! You are very, very helpful!!!

I’ll take the advice of wicinoo and take a break for several days, then I will read again all your comments and rework the head and some other areas.
As for the references - I have used pictures of at least two different girls and that’s obviously part of the problem.

Well, to add to your problems, here’s another girl. I’ve tried to match eyeball and chin to highlight some proportion problems. Placement and size of the nose is off, which affects the lips as well.
Digikiller (Digikiller) April 24, 2018, 1:23pm #14

One thing about lips that many amateur modelers make is the “smile syndrome” where they always model the corners of the lips up.That’s not normal for humans.If you look at the side shot face pictures, notice the natural position of the lip’s corner.It’s on it’s natural plane.Also, when persons smile, the corners draw back not up (like a smiley face).Sometimes the best rotoscope model is a mirror and your own face.I could go on and on about common mistakes on facial modeling and animation but this will suffice.Keep up the good work.

It would take a while to go through the body topology thread on cgtalk, but it probably could be helpful to check out some of the wires posted over there, compare the mesh flow with your own to help with some areas on your model.

Also on the eyes, again there’s the “wide eyes staring” problem.When the face is in neutral pose, the top eyelid slightly comes down over the iris and the lower lid goes up slightly. Remember, they eyes really make the face so, if the eyes are modeled in a “trancelike” position.It’s going to throw the face off.

I have worked on the head and the body today. Here are some new renders. Sorry for the tiny size, but I couldn’t wait for a bigger render. 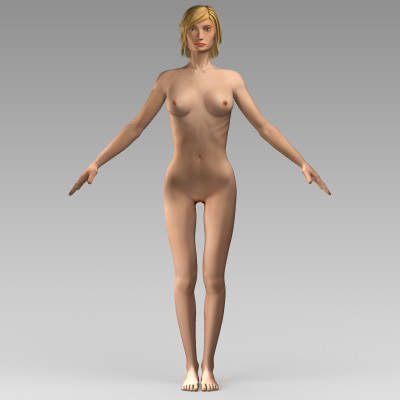 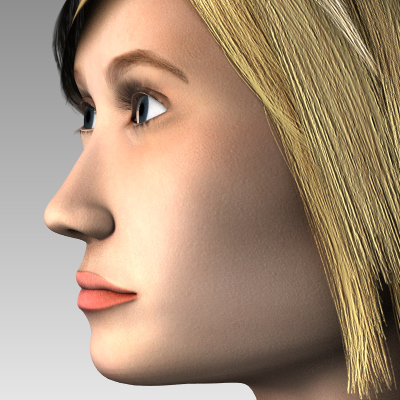 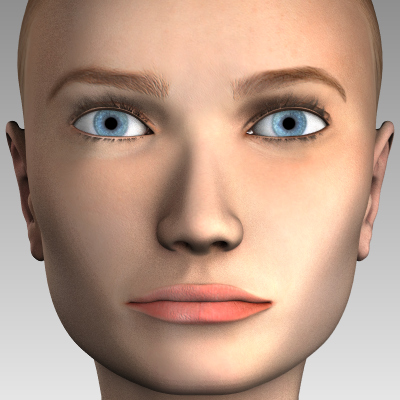 That is definitely better, especially the face (lips, cheekbones) - much nicer. I still think she has very flat belly and also the part of her tighs in front (right below the hips, where legs connect to the body) - it seems like an invisible bag or box is sitting in her lap. But it is difficult to tell, maybe if you posted some side or perspective render, it would be clearer.

Anyway, it is getting better, keep up the good work

tomorrow I will render some more views and see how the belly looks in different positions. It has much more relief now. For the tighs - yes you are right, again