Another infinite runner (in forest)

This is made with BF blender 2.78a. There is only one tree, one stone, one animation and a few scripts. Requires a good computer but can be optimised and improved. The lensflare is from here: https://www.shadertoy.com/view/XdfXRX

A previous test in video for the ones who have issues with the file: https://www.youtube.com/watch?v=7CbD0KnD4XA (This was not infinite)

I get a framrate of 16 or 14.How would i space out the trees and rocks in your python code?The framerate
improves when i do that.

EDIT:
Nevermind, errors were from a different file…

@pqftgs: Hello, I guess you can try to add
#version 150 compatibility
#extension GL_EXT_geometry_shader4: enable
at the top of then lensflare filter

What?? Vertex? There is no vertex shader in my scripts…

And seed? I don’t know where it comes from… Very weird. Maybe it comes from the fact the file was initially upbge then I saved it with BF bge and there is a mysterious cache somewhere… Maybe appending the object in a new Blender 2.78a file would solve the issue.

@Nicholas_A: The controls are editable on object named “player”

Tha last optional argument of range. You can increase it

I get a framrate of 16 or 14.How would i space out the trees and rocks in your python code?The framerate
improves when i do that.

@pqftgs: panzergame has a fix for the culling bug in upbge. So I guess it will work with upbge after the fix is commited if you build last upbge master. Well it doesn’t work for me for now.
To fix the issue, just append sounds from the file and put it on a cube. Then close your eyes, press P, and imagine a beautiful forest at night with trees moving with the wind

On my hewlettpackard pavalion desktop your infinite forest runner demo does not show all the ground.Is it because my computer is low end?Here is a screenshot. 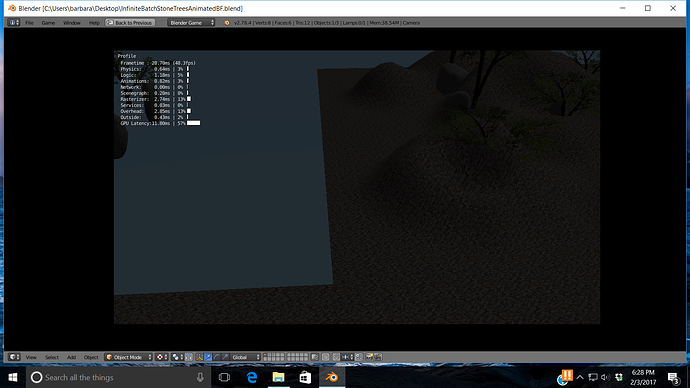 http://pasteall.org/pic/show.php?id=112074 !!! As I already mentionned, there is a culling bug with upbge in this file. This will be fixed soon.
The solution I suggested to pqftgs is also available for your framerate issues, culling.
Also, this can solves QUERTY/AZERTY conflicts.

But there is also the alternative of Unity, CryEngine, Unreal engine that all have PBR and might render my scene 10 times better, with a better framerate, with logic pre writted etc…

panzergame fixed the bug in last upbge master 4 february 2017 evening in France (@pqftgs, if you want to test now, I guess with your christmas GTX 1060, it will run :))

It’s actually quite nice if your a left handed mouser, But I’m not I hate it.

EDIT:
I tested the other (wrong) file in UPBGE - errors are gone.

pqftgs: I officially forgive you

Should work in upbge too now: A Windows 32 bits upbge 0.1.4 build: https://drive.google.com/file/d/0B3GouQIyoCmrOWRqQUtPS3R0UVk/view?usp=sharing (The trees file is not optimized for upbge though)

Since it is not infinite the title is misleading.

If you want something that “seems” more infinite, increase the mapSize…

pqftgs: I officially forgive you

Should work in upbge too now: A Windows 32 bits upbge 0.1.4 build: https://drive.google.com/file/d/0B3GouQIyoCmrOWRqQUtPS3R0UVk/view?usp=sharing (The trees file is not optimized for upbge though)

Are you going to optimize the tree blendfile for the upbge?

Actually, I thought that the performance difference beetween upbge and BF bge (BF bge faster) was caused by non constant materials uniforms (an upbge feature) and background sky (supported in upbge but not in bge). But we have also a little bug with animations. So we’ll investigate to fix it.