I got a good laugh when I saw this. A unique approach to the contest.

I guess I’m a bit curious on the “uncanny” statement, what do you mean by that as it pertains to the girl. In some ways, I wonder how it would look if she was facing the puppet and laughing like that… like being turned somewhat toward the puppet with maybe a 3/4 profile.

Ha! I remember watching that before, classic. Similar idea. I’m glad you understood the significance of the red object.

I may play around with a few different shots, but I cheated pretty bad on the dress and just topo-ed it in pose and didn’t go too far beyond the shot silhouette, so I’d need to extend the dress. The couch has some angularity that I just smoothed out with a clay brush. The couch also comes to a somewhat abrupt end, I thing I will crop that end off.

As for the uncanniness, It’s just that damned uncanny valley. Hard to put your finger on what exactly is making her look look like Joan Rivers, but in focus it just stabs at you – CG. It’s a million little things, shape, maps, lighting, laziness. It’s particularly diffuclt to get a natural looking big smile/laugh shape. The verts in the loops around the mouth are so tight, and moving them can make for bad pinching. I used references, and did my best, but ultimately it just has to go dof.

I’m glad you understood the significance of the red object

Hell yea… that’s what would make this a good entry

Cheat …shmeett… her dress looks fine…so do those big knockers:) The loveseat does look a little small length wise (that’s what she said

What about if she took on a whole different pose where she was like putting her hand over her mouth in surprise… just thinking out loud. But I still think you should experiment with her looking at the puppet.

This is the part where get it gets really hard.

Unfortunately at this point too much is baked into the pose. The dress looks fine, but you can’t move the camera much without seeing that the dress doesn’t cover everything. That’s not an issue for most people. And it’s multi-resed, so I can’t easily add new geometry. I cut a lot of corners which makes moving things a pain, and with one day left it’s going to be more or less this shot. It’s got atmosphere and small fun story, although a bit short on focus and detail and scenery.

And yes, the breasts are probably too big. Wait, is that even possible?

… hmmm I want to come up with some smart ass comment, but that would be too easy

Yes it does… and big knockers too , how could it not be considered a contender

Ain’t it fun talking like a couple 18 yr olds?

Knocked down the knockers, lowered the dof blur and motion blur, other minor additions. Submitted my entry. There are only a handful of images using human models, and very few entries that go for a laugh or a smile, so maybe I’ll score points for that. 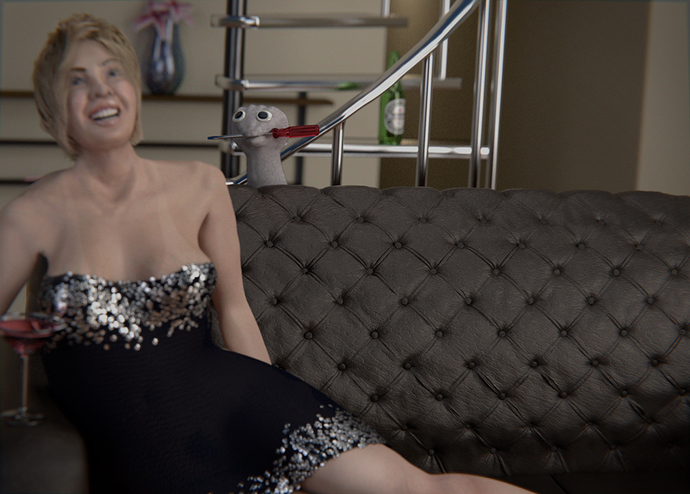 This is funny! I like her hair in the first version, but I like her smile better in the second version.

She seems bent in an unnatural way

I love the uncanny ness haha great render so far!