I would like to have advice on an really complicated style of Save/Load system. To make for you guys better to realize things wandering in my mind I quickly made a clarification picture below. In the picture you’ll see alot of stuff. so please let me explain abit. using imagination ofc =)

I play in Land2.exe and then i want to save lots of properties and the location of the guy to, let’s say, Location.txt. I also need one extra file which determines the land I was in. Land2’s Code number is 2 so I want an file that “2” is written in. I come back later to play the game. in load menu.exe it reads the savefile.txt and redirects me to Land2.exe. if i would save in land3, the code would be “3”, and I would be redirected to Land3.exe. Getting this? And when I’m in Land2.exe it loads the location.txt and then I can move happily on.

I hope you got my point =D thanks alot guys =)

Ps: this is first time i upload pictures here. If the pic isn’t showing in this post I will try to upload it in this thread once more. 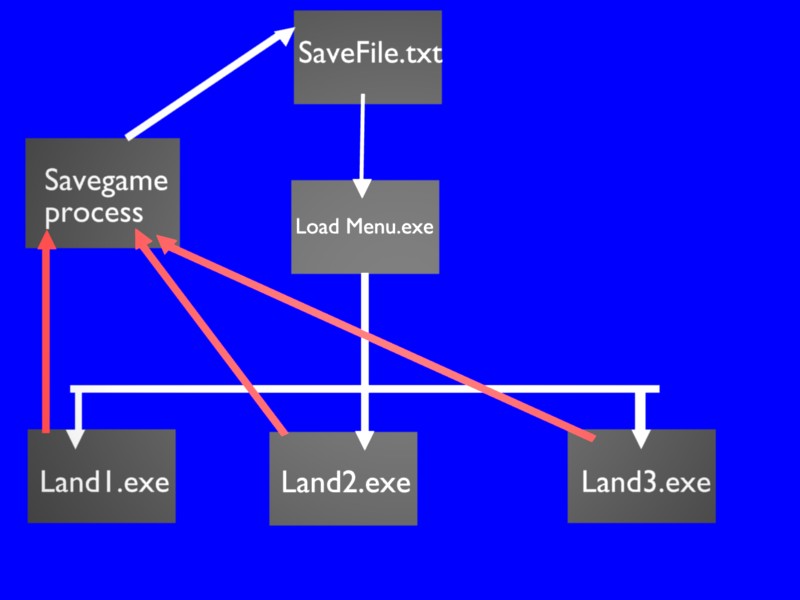 You can easily do all that with the open() function built-in python:
http://docs.python.org/library/functions.html#open

it says that Int object cannot be saved =( is there any like (template?) script which I can modify so it can save and load items?