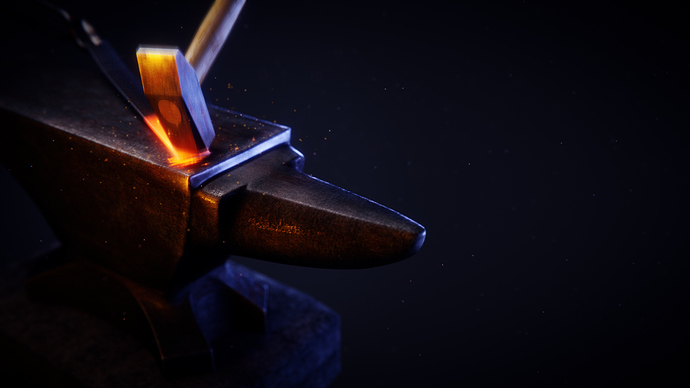 This image was a request by my brother. He had an idea for a wallpaper and gave me a rough sketch on position of the anvil and an explanation what he would love to see. Since he is always to committed to the things he does – forging in this particular case – I wanted to create something that would suit him.

So I started working on the anvil, the hammer, the pliers and their composition.

I did chose an overall dark atmosphere using blue as the environment light since it would contrast the steaming hot orange & yellow iron the best.

When I gave him the first version of the image – all proud of what I had achieved – he basically said it was ok but the sparks and position weren’t right. In his drawing he drew the anvil positioned to the left – I somehow didn’t pay enough attention to this ‘little detail’ and just tried to cover up the fact that no character is holding the tools – how foolish of mine. The sparks didn’t look yellow enough and just to thin for sparks of hot iron.

So I had to redo it – like a lot. Mirroring the image was not an option for me, so I did rebuild the lights, the objects positions (I tweaked it a lot compared to the first version) and did add a bit more glow here and there, a bit of motion blur and a few more stylistic things like depth of field & vignette. This one turned out really nice for my personal taste – and I hope he’ll like it as well.

It was rendered with cycles and a bit of post in compositor (color correction and such). 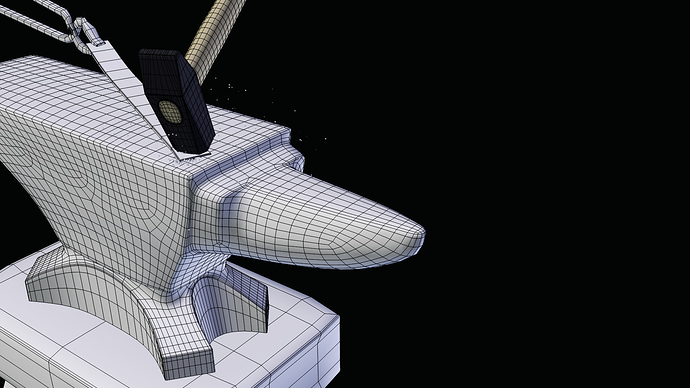 wireframe view of the scene.

Love it, all moody and atmospheric

Great job! Love the colors and athmoshpere, you surely know how to do a great post-pro! Somehow the hammers handle is slightly looking out of perspective, though I am not sure why. Might be that you have such a low fov.

Anyway I love the sparks and the iron, shaders work perfectly!

Good,nice,well done,etc…as an image…maybe a bit too much left centered… unless your brother keep his icons on that side of the screen…but from a blacksmith’s perspective (for fun and profit from mid 70’s till late 90’s …I wore out)…you best get your irons back in the fire…The sparks are what need the motion blur and a bit brighter…The anvil…the long edges of the top working surface should have a larger radius and the whole surface is a different material(hardened steel) so should have a different surface…the cutoff surface right behind the horn would be wider …and I’ve never seen a horn with such a flat section on top…all in all it looks unused…no spots worn shiny…and it ain’t held down …If he’s left handed…judging from the hammer handle direction… then the tongs should head that too (doesn’t show in the render…but you included the wire…tsk tsk)…the cross peen needs rounding…the size in comparison to the anvil seems weird…and in relation to the work piece…what are you trying to accomplish ?..looks like something you’d be fixing later…anyway…but the light is pretty good…just dark enough to see the color and help keep your attention. Hope he likes the finished result and keeps on tappin’

Really nice, lighting especially! I personally have my icons on the left, so I would probably flip it but that doesn’t really matter. I also think that it would look good with a HDRI with heavy DOF blur, color graded to give the same feeling as the flat background you have. It would just give more subtle detail. In any case, keep up the good work!

Thanks for the kind comments & critics.
The first version of the image was flipped (anvil to the right) since I thought I’d like to have it as a wallpaper this way - and I was able to better cover up the fact that no one is holding the tools - especially the hammer (and tongs) that still doesn’t yet really work as nice as the lighting - which was my main focus or rather the overall atmosphere. I didn’t intend to do a precise model of an anvil but rather provide my brother a nice wallpaper for his computer and create an image with a believable story. I do appreciate the comment about the flaws in the correctness of the image and agree - only in this particular case I decided that ignoring accuracy over composition was reasonable since my focus was more on atmosphere and story.

it is best!!
Best of the best

and create an image with a believable story.
…that’s what I am mostly questioning…it’s certainly not a surrealist piece…and if he’s
committed to the things he does
…I guess I assumed it would be the right way…sorry pal.

Frank The Smith, although you raise some good point, you are rapidly moving away from ‘constructive’ criticism and towards just being pedantic.

All I see is a well textured and very impressively lit image. Good work Creamsurfer.

thumbs up this is a great scene

Thanks for the kind words and comments!

Suggestion: the hammer need to looks more heavy (bigger), in my oppinion.
Some ref I found on topic, they may are helpful: The rend is really Great!

Thanks! I consider the image to be final hence posted it here in finsihed projects. Next time I’ll do an anvil image I’ll do a bigger hammer

I really enjoy this image, creamsurfer! The cinematic quality is very appealing to me; the texture of the anvil, the warm and cool lighting, the particles in the air, and the DoF and motion blur all come together nicely. Your work is very inspiring, I look forward to your future images!

@James Candy:
Wow - thanks a lot. That’s a really inspiring comment as well