Any idea how to model Sauron's helmet?

It seems awfully complicated, does anyone want to have a go at modelling it? I will. Sanctuary showed my the basics for helmet modelling earlier and I successfully modeled an Uruk Hai helmet (Which if you play Skyrim, is available on Steam workshop as a mod), so I’d thought I give it a try, if your any good at modelling things helmets and complicated designs. Could you give it a try and maybe post your result here?

Image isn’t really good for modelling the entire thing, but there aren’t that many great ones, this just shows the complicated close up detail 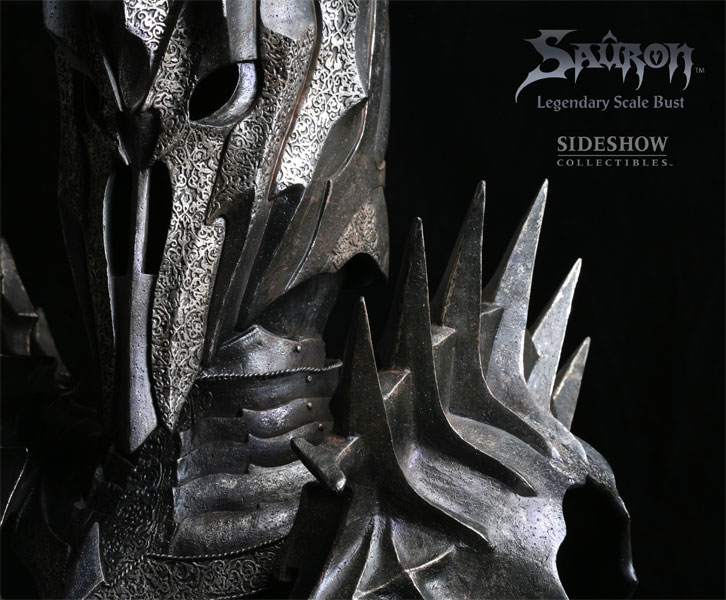 Sculpt (without much detail) and then retopologize

For your base model, start simple with using background images so you can get the proportions relatively right. 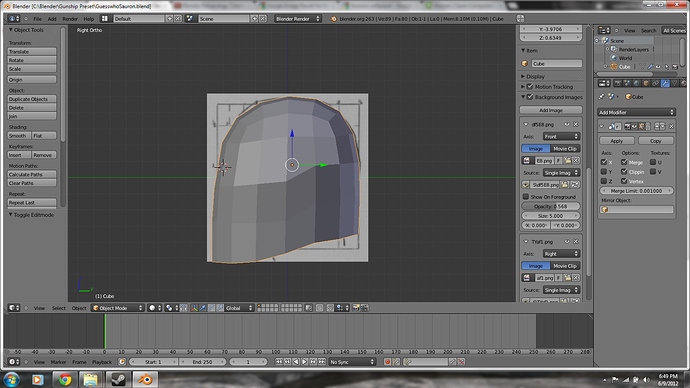 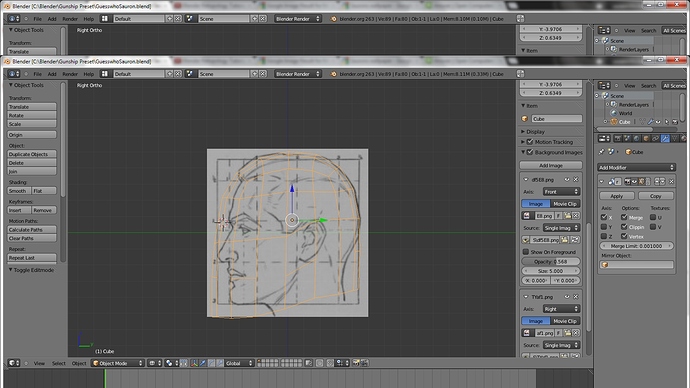 How would retropology help? The youtube link showed someone sort of copying a model by using some tools, but I have no Helmet to copy off…just an image

You can create the eye opening, roughly like this or just make them 2 holes instead of a whole opening, you can always rework the zone later anyways: 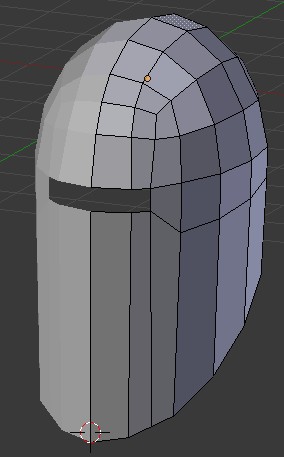 srOdk.jpg298×528
I used this as the reference for this kind of pointy bit : Change the pivot point to 3D Cursor, and select a vertice then press SHIFT+S then “Cursor to Selected” to place the 3D cursor where we want for the next step to come nicely. 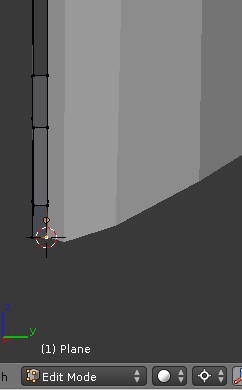 Now for this pointy bit, add a “Simple Deform” modifier, set to “Bend”, and play with the setting, while controlling visually how it goes 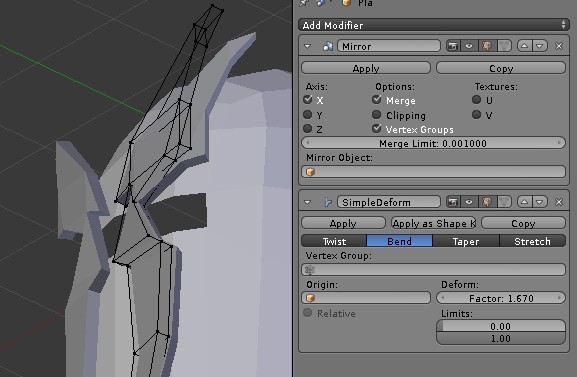 When you’re satisfied, go to Object Mode and Apply the simple deform modifier (as you’ll surely change the 3D cursor location for next pointy bits, it would influence that modifier if left unapplied)

EDIT: set it in object mode, seemed to do the trick, what should I be accomplishing with the modifier? Should It be as much like the original ‘sketch’ as possible, or different, a little twisted?

You can modify it in every mode, not only in the Edit Mode.
the default is “Median Point”

That’s when you apologize to someone in the same manner as they did in the 80’s… ;D

(awesome mis-type that one, hehe)

Here’s what I got…

Is this what we should do for every piece of the helmet’s front side?

My modifer is adjusted so it sort of fills up the space of the original outline, I’m not 100% sure what I need to get with it you don’t necessarly need the simple deform for every pieces, it’s more a “by case”

By example if i model the central part :
It does not need that simple deform modifier, it’s just an object a bit warped using the 3D cursor as the warp center. 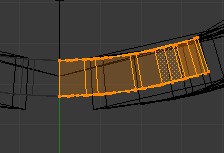 Then for those lateral bits, i simply put together the shape of the pointy bit

I activate the retopo function by enabling those buttons :

Select all the vertices, look at the angle i want to project on the main helmet shape, then press G (like if i was going to move them) then press Enter
The vertices are now projected on the helmet base (from the angle i was viewing, so be sure to set up your view how you want before pressing G then Enter) 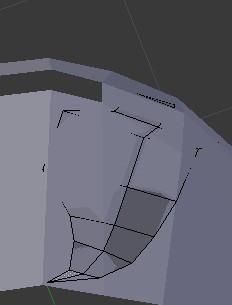 I disable the retopo function (just disable the “magnet” button, it’s all you need to disable), then extrude your model

I’m being inconvenient by being a little confused with your central piece, and how this warp thing worked… I don’t see where that ‘band’ of faces became the central piece.

An example , i have this (mirror modifier is used obviously) : Now if i want it to bend, i’ll need to add a few vertical “cuts” to help it

Now the warp itself, the key point of the warping are setting the pivot point to 3D Cursor, and left click to put the 3Dcursor where i want to be the center of the warp process to occur, and set the view of the top, so the warp process occurs in the angle i want 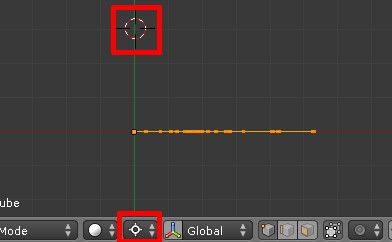 I press SHIFT+W (or Mesh -> Transform -> Warp) and move the mouse (at least it’s like this in the up to date buildbot version, i don’t remember if mouse adjustment is in the now old stable release) until i’m good.
If i want to adjust more (and/or if mouse gesture does nothing in the old stable release) i press F6 or check in the Operator panel and adjust the numbers manually. 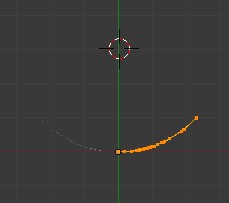 And finally, i extrude 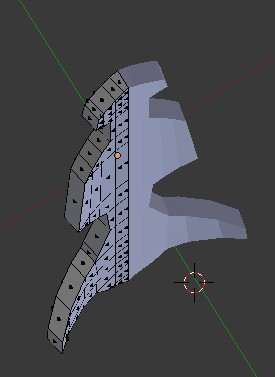 Check for internal face at the center of the mirror symmetry, delete them if there are any, then select all , W->Remove Doubles and CTRL+N to recalculate normals

Alright, I got it, I had already split my centerpiece into a bunch of vertices and then selecting each vertical ‘strand’, I had basically made my own warp. But the warp did it neater.

And how exactly are you getting it to ‘wrap’ around the helmet face? (NOT THE WRAP FUNCTION), like this retepo stuff? Its just something I can easily get wrong and I don’t want to

Really sorry, I’m sure you sigh and think ‘not again’ when you see me post

If you need something to wrap around something else, you have the shrinkwrap modifier too :
http://wiki.blender.org/index.php/Doc:2.6/Manual/Modifiers/Deform/Shrinkwrap
Play with the settings to see how it works and how to obtain a result close to what you need.

While having it active, you can always try to adjust the vertices individually, the shrinkwrap will continue to project them on the target model so you can see better

Thanks a ton Sanctuary, I’ll look into that.

I don’t think it’s possible to extrude anything while the shrinkwrap modifier is active as it would just project every extruded vertice on the targetted model.

So the way to work with it is with non-extruded shape, then when you’re satisfied with the portion you “shrinkwrapped”, apply the modifier in Object Mode, only then youc can extrude from what you did without problems.