Any tips on making this better?

Going to add a character with black clothes or something for contrast. 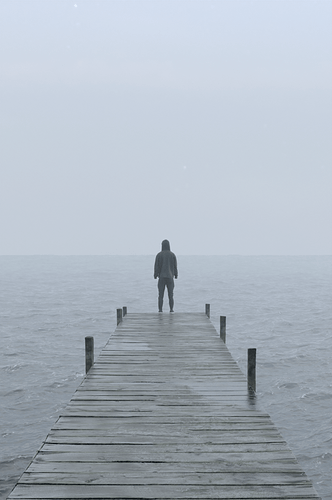 Maybe contrast ? The horizon is… hmm… maybe some clouds barely visible ??
I also think that the dock looks a bit weird… maybe because those pole are usually at the almost same positiion left and right because they hold a crossbaron which a bar on the length is placed and on that the boards are mounted… ? (You may have done this to break the symetry ? But it look unnatural now… ??)

Maybe a rope at one pole… or a metal ring… a chain or maybe partly handrail?

I think the sky should be cut in halve since there is nothing up there to make your eyes focus on the character in black more.

What story are you trying to convey? Waiting for someone/thing? Contemplating suicide? Contemplating the vastness of the ocean? Each might require a different framing. At the moment it’s hard to interpret the meaning of the image.

I actually like the composition. The water and how it’s interacting with its environment is pretty excellent (assuming it’s all rendered)

I’d perhaps increase the density of the mist, so that the horizon line is either gone completely, or much softer.

Perhaps something else could be added. Something subtle in the background, amidst the mist and fog. It all depends on what you’re trying to convey though, of course.

Back in Scotland, or now when I see the Baltic Sea, there are days like this. You have captured the look and feel of these sea fogs well. If anything I’d just suggest making the gradient from fog to sea more diffuse - on these days you really can’t tell where the sea ends and fog begins, and you can rarely see more than a mile or so out to sea.

Personally I don’t see any problem with the image. It’s quite simple, it’s not bashing you in the face with some “message”. It can be interpreted as bleak, serene, depressing, etc. - a whole bunch of things. 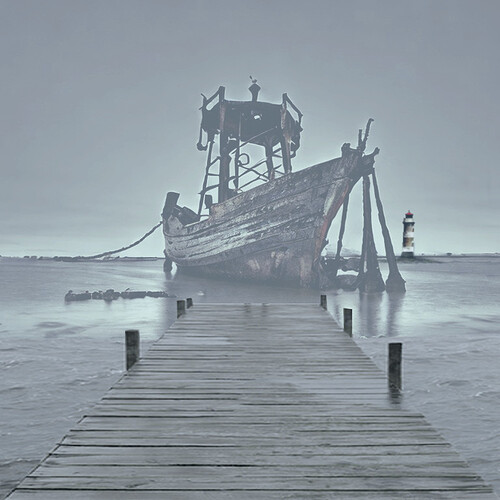 All I can say is: “you nailed it!” You don’t need to do anything to “make it better.”

But, you should know that it is really bad form to post what is “obviously” an actual photograph of someone standing at the end of an obviously-real dock on a foggy day, and then claim that it is computer graphics.

You can try to move the camera up and down and see what works better.
Having the horizon line not in the center of the frame, and not close to the neck of the character might be a bit more interesting.