Any way to import morphs from Daz3d to Blender?

Hi, has anyone found the way to import morphs from Daz into Blender shape keys?

I tried with both FBX and Collada, with the same result.
In Daz I exported selecting the morph options, but then once imported in Blender there is nothing in shape keys, although I can see imported vertex groups, bones armature, and everything else…

Any experience on this please?
It seems that Blender’s importers are capable of importing morphs. I tried exporting morphs from Blender and reimporting and it does it.
And Daz can export morphs too.

So I don’t understand where the problem is.

FBX does this. In the DAZ fbx export dialog you need to define morph export rules to define what gets exported. But fbx vertex groups are screwy. Export a dae and an fbx, then in blender use the data transfer tool to copy the dae vertex groups to the fbx meshes.

Export a dae and an fbx, then in blender use the data transfer tool to copy the dae vertex groups to the fbx meshes.

Thanks for the answer, but I don’t know what you mean with this. I need to transfer shape keys not vertex groups.

In both formats DAE and FBX I get the same, I get imported vertex groups, and so on, but not the shape keys.

It’s not a one-click process to go from Daz with morphs to Blender with shape keys. Try this: https://blenderartists.org/forum/showthread.php?321572-Khalibloo-Panel&highlight=khalibloo+panel

I’m sorry, I assumed you would want shape keys and vertex groups. The best way I know to get both is like I said, transfer from the dae to the fbx.

As for the shape keys, did you define export rules for the fbx? 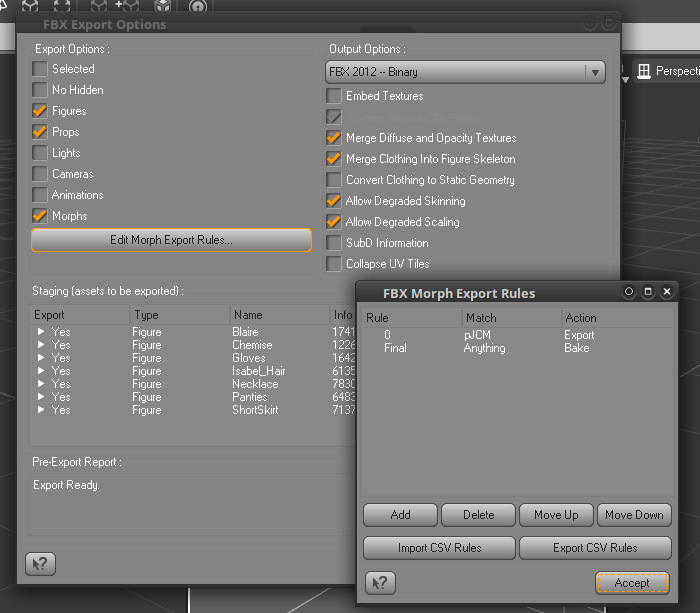 ‘pJCM’ is the prefix for Genesis3 corrective shapes. And they DO, in fact get exported and imported properly. 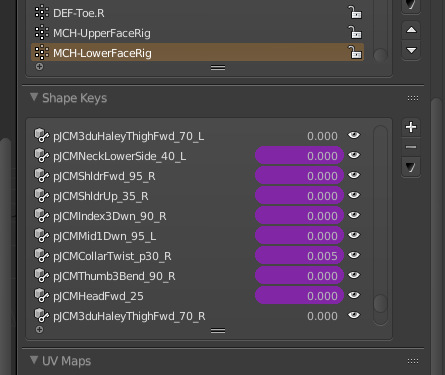 Thank you very much guys, this is a very good information.
Wow this khaliboo tool looks really interesting Safetyman, I’m going to read that thread when I have time, because it seems a solution to the problems exporting from Daz3d.
SkpFX finally I got the morphs. Thanks for the detailed information, very helpful. After trying several times I have realised that for some reason the ‘morphs’ for Full Body, which are the ones I was trying, cannot be exported… I guess it’s because they go with the base mesh, not as a morph. I think it should be considered a morph in Daz, but anyway…

The full body morphs can be exported. Filtering for ‘FBM’ in the export rules should export all the full body morphs, or naming a single one like ‘BodybuilderDetails’ will export just that one. Keep in mind… If your model is using a morph like FBMBodybuilderSize and you set the export options to export that morph, it will be exported, and removed from the exported mesh, so you have to dial it’s effect back up once it’s imported into Blender.

BTW does anyone knows why I get this when I import in FBX?
Weird pose (it was exported in rest position).
Bones in the head? I thought the face was controlled by morphs. 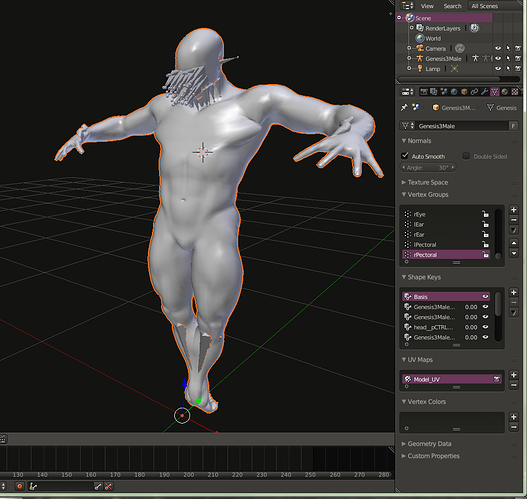 The full body morphs can be exported. Filtering for ‘FBM’ in the export rules should export all the full body morphs, or naming a single one like ‘BodybuilderDetails’ will export just that one. Keep in mind… If your model is using a morph like FBMBodybuilderSize and you set the export options to export that morph, it will be exported, and removed from the exported mesh, so you have to dial it’s effect back up once it’s imported into Blender.

Thanks! Good to know!

I saw the other day someone had created an FBX import addon that supposedly worked much better than the Blender native one. I’ll look around and see if I can find it again.

Also keep in mind, some morphs will bite you if you plan on rigging the model in Blender. The heavy, thin, bodybuilder, etc will rig properly, but height will mess up because it relies on the proportions of the skeleton changing also. DAZ Studio handles this but, as far as I’ve found, blender doesn’t know how to scale an armature and compensate for a mesh that is also doing the same scaling on it’s own.

The face bones are a Genesis3 thing. I believe it uses a combination of bones and shape morphs for facial expressions. I haven’t put all those pieces together yet, but for getting started, it’s actually pretty capable just using the bones in blender.

Oh, and the wonky pose thing… You don’t have to reimport the mesh. Just go into pose mode and clear the pose. The rest position isn’t changed, it’s just imported with a bad pose.

Thank you all. I was quite lost about this. The curious thing is that there is not too many information about it.
It’s quite a pitty that the connection between Daz and Blender is not as it should be. At least not without spending quite a lot of time on solving imported models issues. It should be more straightforward, considering that the purpose of Daz and its library is to save time!

Anyway I have read that the FBX support is not quite promising for Blender, so we need to use the tools we have.

Safetyman thanks it would be good if you can post this version of FBX importer. I’ve been searching but I didn’t find anyhing yet.

SkpFX good points, I will take them into account. I didn’t know about the pre/post rotation option. Appreciated.

Found it! Keep in mind that I haven’t tested it so contact the author for any questions.

Bos FBX Importer/Exporter for Blender 2.77 (Windows 64-bit Only) Download link: https://drive.google.com/file/d/0B_cBWJgWR929LVlJZlpoZi1BTHc/view?usp=sharing Overview This addon is based on Bos FBX...

Thanks! I can see that it’s more accurate importing the bones, there are no issues in the last bones of the fingers.
It’s actually less complete than the standard FBX importer, it doesn’t have options in the importer, and it doesn’t import textures into cycles, as the other does.
But in that case I guess there are solutions using both importers.

Thanks macalister, we all learn something new. It never dawned on me to turn on cycles before importing the fbx. I never even considered that it might do basic node setups. That’s just one more step that becomes a little bit simpler.

Yeah specially with daz models… I have counted 29 materials only with Genesis 3!

You can use this script: https://wiki.blender.org/index.php/Extensions:2.6/Py/Scripts/Material/Blender_Cycles_Materials_Converter to get a head start on fixing the imported materials.