I’m trying to rotate a walking animation. It’s stored as motion capture data in a BVH file (download an example here), and then loaded into Blender as a moving armature. What I would like is to be able to (manually) align the animation. My approach so far was:

This last step doesn’t do what I want. Rather than modifying the animation data, it modifies the armature itself. When I go to edit mode, I see that the edit bones have been changed (see before/after image). 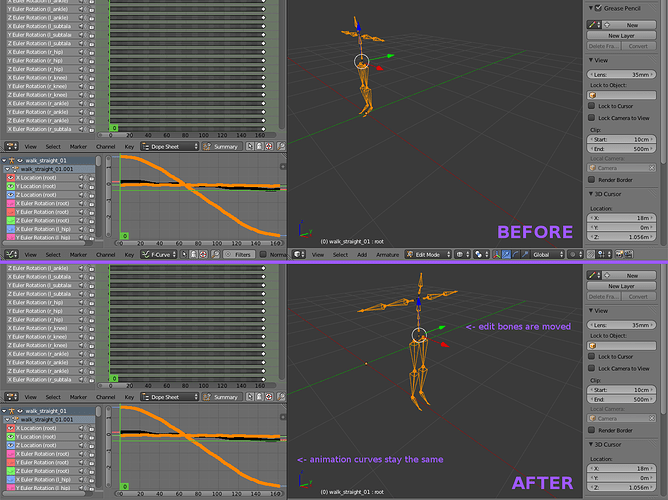 Since I have multiple BVH files with multiple motions, this is a problem. Since the motion data itself isn’t changed, it’s impossible to use the aligned animations as actions, and I cannot link those edited actions to a single armature.

My question to you: how do I apply my alignment (rotations & translations) to the animation data, while keeping the armature itself unchanged?

PS: I’ve also asked this question at StackExchange. I’ll make sure that if there is a solution posted here, I’ll update my post there, and vice versa.

The answer lies in the MakeHuman Blender tools. There are a few steps you need to get right, though: