Apply Multires, now how to get it back?

After clicking apply for Multires modifier, it then moves over to the left pane window with a foldable title that reads “Remove Multires” but nothing is under it. Im trying to figure out how to bring it back so that I can lower the multires.

I’ve been watching tutorials and I see the artist hit apply but also be able to bring it back in the 2.4x interface. I am using 2.5

Thanks for advice,
Daniel

If you press the Apply button the multires is applied so you can’t bring it back (unless you undo immediately afterwards). First thing to learn, don’t apply modifiers unless you have to. What reason do you have for applying it ?

Well first off, Im a complete noob. Now thats out the way,

I was watching this vid and he’s using a 2.4x blender and I saw him hit “apply” as well as verbally state (along the lines of) “… and I’ll go ahead and set smooth and apply multires”. But as the video progresses, you can see him bring back the multires and change the settings, I thought maybe he was just making a new modifier (though you say multires isn’t a modifier in 2.4x) but it just doesn’t match up to what i was seeing in video. Here’s a link to what im referencing 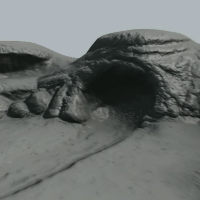 In this series of tutorials you will learn how to create a finished environment for Blender's Game Engine. The main focus of the series will be texturing and lighting, with the use of some custom...

I also just read that applying the modifier provides a more accurate rendition of what its actually going to do and I could sort of see that initially when working. And being such a noob, and following along in that video, I wanted to see that pixel perfect blend as I was working, its just neat, lol.

Anyway, I started suspecting I should just avoid apply after I started reading about the modifier stack and I guess your confirming this for me now. Now I get to start over on my little landscape and practice using those brushes some more.

And actually, I guess I have a workflow question when i started to think about this a little further. If hitting apply does provide a more accurate representation of whats going on, then whats the norm here? I was thinking if I wanted to do this, I would just duplicate the mesh, move to a new layer, and hit apply for that and use that for rendering. Then if i wanted to do anything specific to the original, multires is still in its modifier stack.

Do you have any advice regarding this?
Thanks

Man I would really love to read what you said: Applying Modifiers gives better resolution? I am not questioning you. just curious. I have rendered with modifier applied and no applied and I really do not see a difference, at least in animations. i don’t know in very very complex textures…well please point out where did you read that.

Modifiers as far as I know, work better without applying them. ( Mainly saves system resources) However i have always scratched my head on this because we have the Apply Button!..well it could be for exporting the full mesh? if you do an animation, definitely " NO APPLY"…for stills, well that’s what I try to find out. But in the mean time, do not apply it .