Here are some 3D print of some of my architecture blender models, that I printed with my ultimaker:

This one was just to test the overhang

A earth house from a very old image


An other one from an even older render

A render from my book and the printed one


A softbody catherdral once again inspired by Gaudi’s work 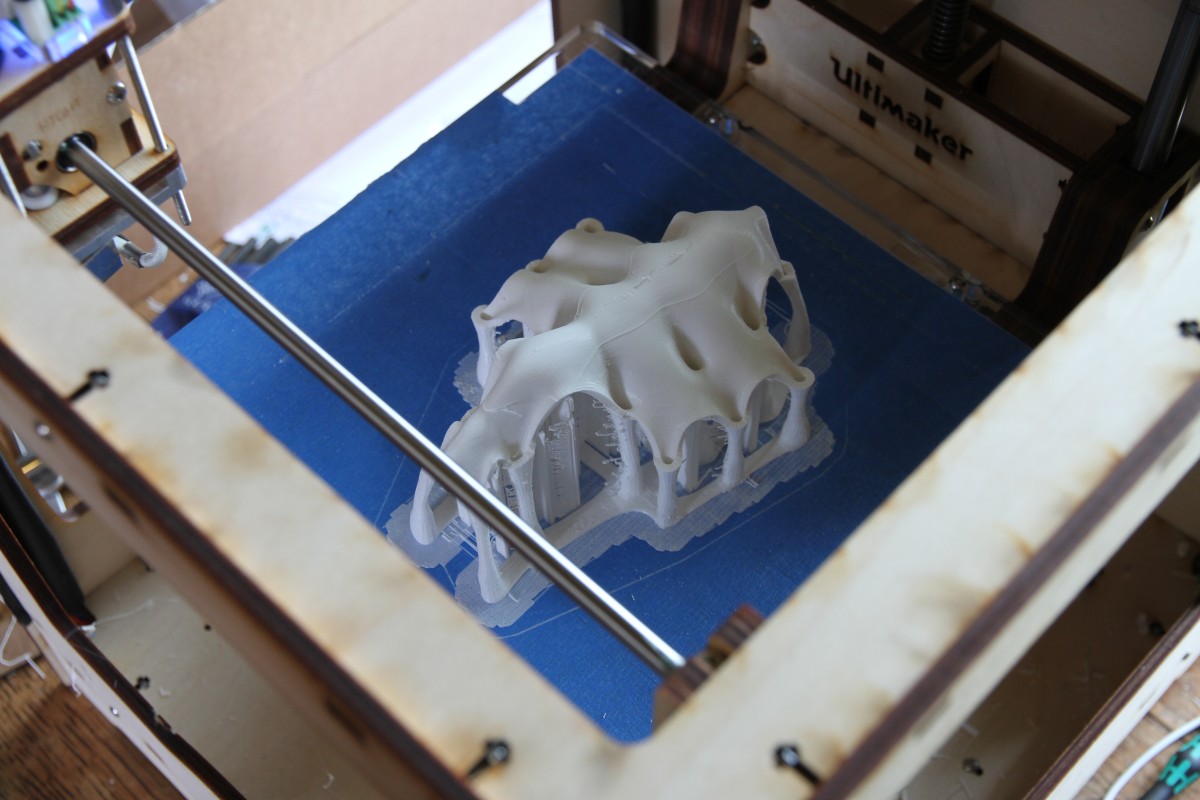 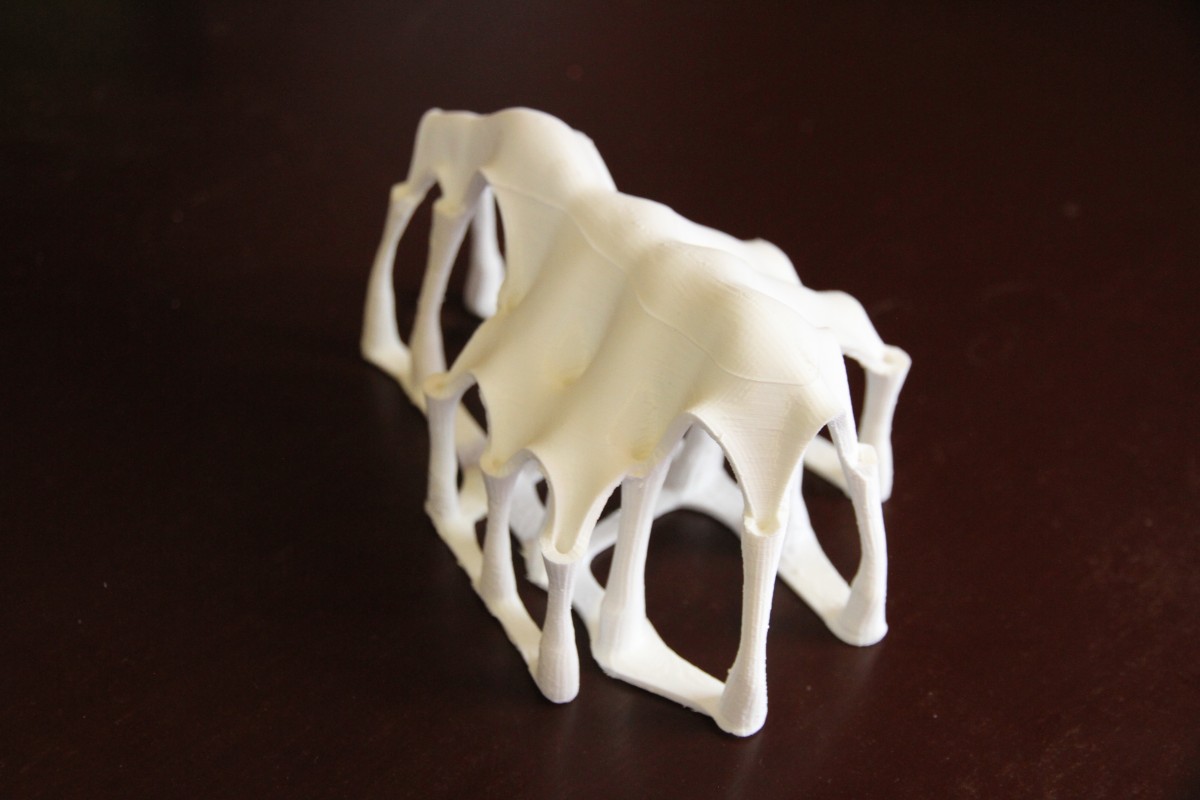 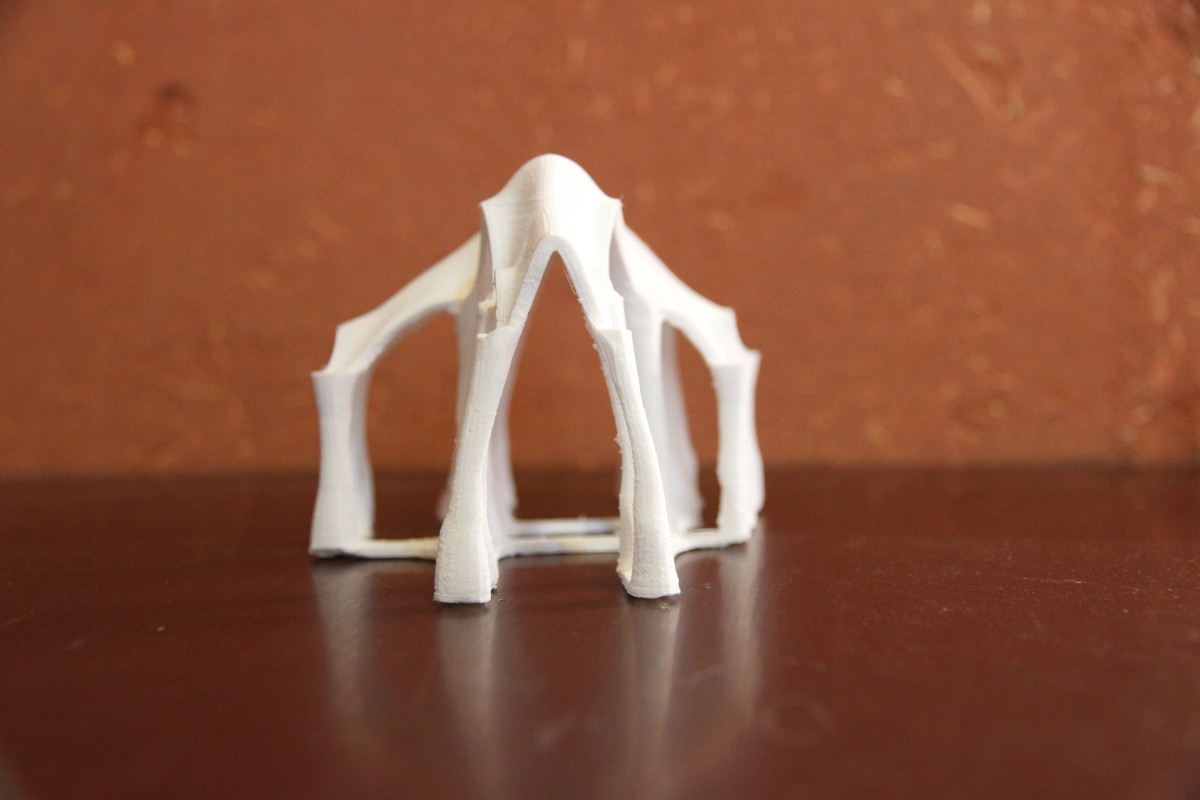 The same one decimated: 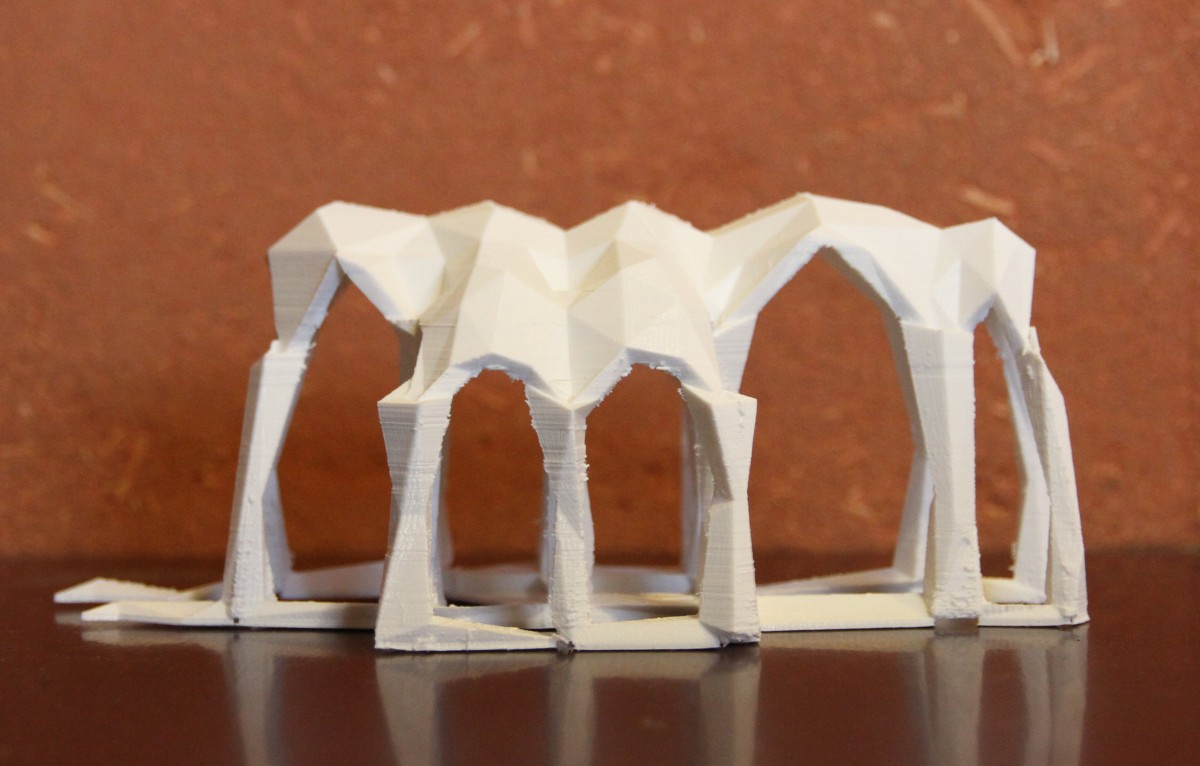 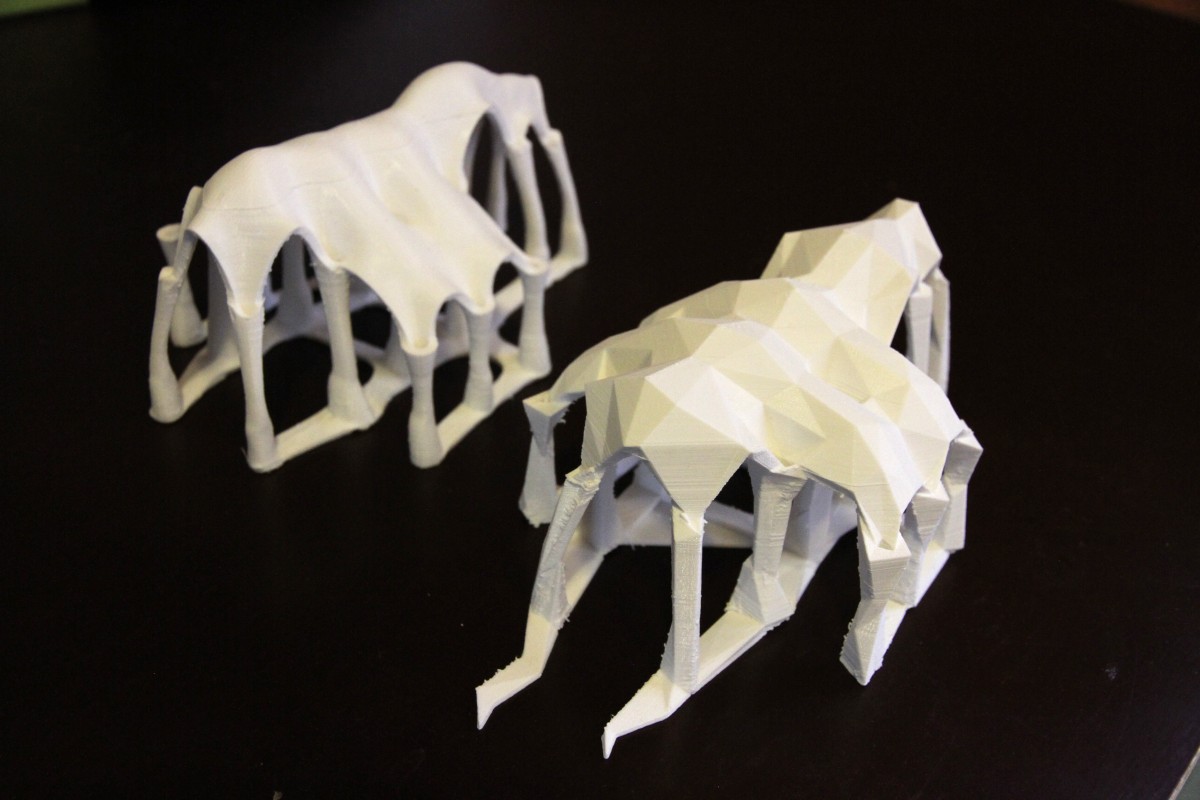 I really enjoy it indeed. And as with Cycles my renders only last minutes now, I’m happy to have to wait for 11hours for a print. Reminds me of old times

And here is a timelapse of the whole process for the last ones: the design in Blender, and thern the printing? Hope you enjoy it:

They are under creative commons CC-BY-SA, feel free to use them.

I completed my post on my website with some informations about the use of 3D printers for architectural models. More to come…

Wow, that is crazy! that’s something I’d really like to do, someday, is see my 3D creation become reality.

Here are some new prints for xmas lights

Next step is to apply this to architecture.

Wow! These are awesome. Really creative. Especially love those Christmas lights! You should consider putting them up for sale on Shapeways, I bet loads of people’d buy them.

This is great! 3D printing is one of the reasons why I wanted to be able to make objects in blender. The translucency and the diversity in thickness of the layers works very well with the light behind it. Which kind of plastic are you using, PLA or ABS? As of yet I don’t have much experience in 3D-printed objects, does the heat of the lamp effect the plastic or do you use a LED-lamp which is generating less warmth?

Thanks for the comments. It may be a good idea to put them on shapeway/sculpteo, but I will still publish the blend files (the STL are very big as there are so many vertices).
It is white PLA, it is indeed better to use led because it’s quite sensitive to heat.

Here is my latest test, to experiment with dual extrusion : I can now print with two different materials on my ultimaker. Here the model is done with white PLA and transparent PLA. The size is 3.5 cm long. Printed with 0.6mm layer height. Setting and adjusting the dual extrusion is quite tricky, but it works.

Thank you for the comment. Here is the last one, mith thin walls:

Here is my last one. I used bronzefill filament for it. It’s PLA with bronze powder. After sanding and polishing it shines and looks great. Not exactly like bronze though, but definitely gives a feeling of noble material: shiny, heavy, with ceramic sound and touch: 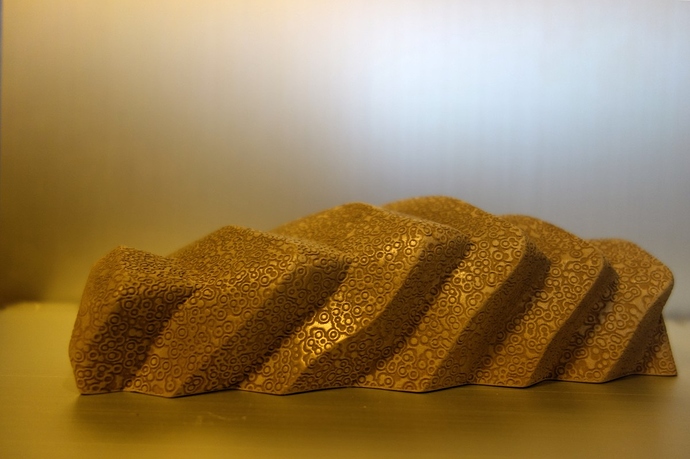 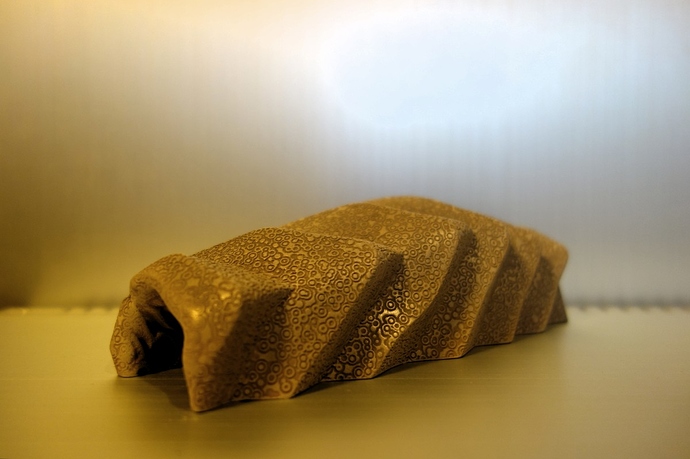 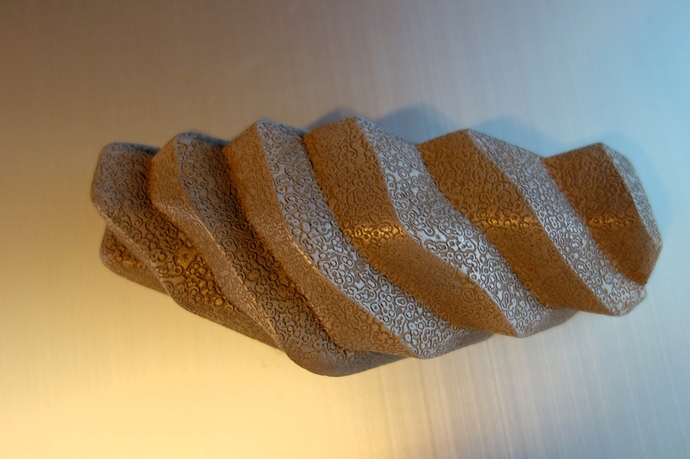 And here is a video explaining the whole process, from designing in Blender to polishing: