its time to to post a new wip from a commercial project in blender. It’s kind of an archviz for a festival here in Switzerland, which is held every ten years. The theme is “versus”. It will be a temporary bar for 1 week. To get a spot you have to show the head of the festival a concept of your bar. So I’ve been asked to do so. Here is what I got so far. 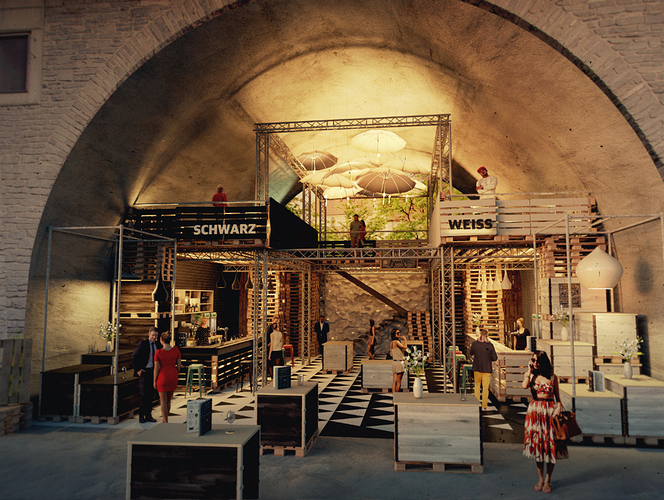 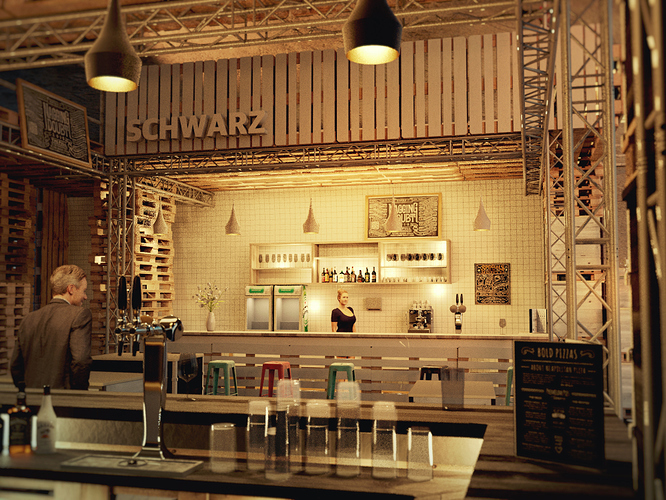 The bar will be located under a bridge. Got also a problem with the glass shader. The glasses turn black. In the image above I had to brighten them up. Maybe I have to crank up the transmission rays.

Let me me hear what you think.

I think it looks very good overall. I agree that there’s a problem with the glasses. It’s hard to describe but they look sort of “ghost like”. I wonder if there is not enough refraction. Unfortunately I don’t know much about the transparency features in Blender so I don’t know how to improve it.

It looks like the people in the second picture are not doing anything. It might seem more real if they were in the middle of doing something. It looks like the man has some facial expression and body language but there is nobody with him to talk to.

I’m a little confused as to where the second picture is taken from. It looks like it could be from behind the bar at the left looking at the bar at the right. Are the people arranged in the same ways in both pictures? The woman behind the bar in both pictures looks like the same person but I don’t see where the man in the second picture is in the first.

Also, the back part of the hanging light on the right side in the second picture looks too dark to me.