I am mostly concerned with proportions & shape, and less so with particle hair quality (my machine limits how much iterative work I can do on the fur). thanks for any crit 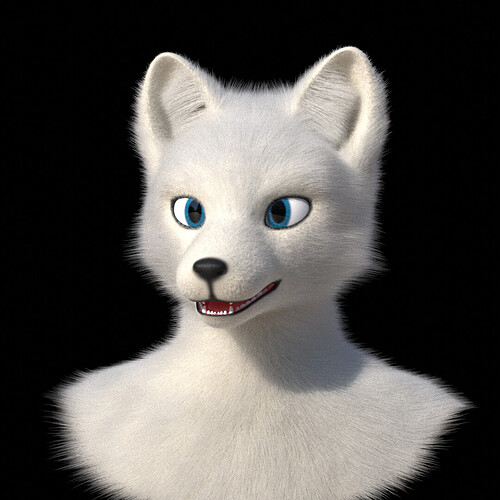 Hi, I think it’s hard to make some crits if You don’t tell us what is the goal. Are you after “realistic” humanoid fox (Cats 2019 brrrr…) or maybe more cartoonish? I wold opt for the latter. Now your character looks… generic, bland. I would push the design way farther. Look at the reference, pick the features of a fox which you find interesting and exagerate them. Is it the pointy nose, triangle head shape or maybe the ears? Also, what is important, you must think what character features you want to convey and make the design desisions based on that. Is the character, fast, strong or fluffy and clumsy?

hi! thanks for the feedback. I am aware the character is rather generic, as its supposed to be a base mesh. he’s therefore not meant to be very special. I’m more concerned if he looks creepy or something about him looks off (his eyes are too close together or his snout is too long or something like that). I want to make sure he looks appealing to the eye, even if bland

Hehe, just now i did try to imagine what would I change (to help You) but I always and up heading towards certain desing. Because for me to look appealing it must be special, it must be not generic

Guess I am not able to help you this time

Doesn’t look creepy to me personally, in fact the first thing I thought of when I saw it was Secondlife. Been many years since I visited there, but Secondlife has ‘Furries’. I remember the furries on there tended to have a friendly look about them, and this model definitely has that sort of thing going on.

Kinda miss exploring Secondlife, it was cool to be able to just explore the different environments of the various cultures on there, Furries, Vampires, Cyberpunk etc. Might have to rejoin since I can’t even remember what name I had my avatar under

Hello. New here.
This is nice. Is this part of a costume? Meaning, it has visibility through the eyes & can you breathe while wearing it?
I’ve been looking for something to match my pup on Halloween. I can find bodysuits, furry cuffs, tails, ears, some face mask & even a baggy onesie but must are for the red Fox.
My pup is a Japanese Spitz. She looks like a white fox.
TIA