I recently switched from Blender 2.79 on Windows to Blender 2.80 on Zorin OS (a Linux distribution based on Ubuntu). On 2.80 there is a problem with the armature that I didn’t have on 2.79. IK works fine, but when I rotate the upper arm bones with FK, the mesh gets distorted. It looks like the bone is rotating the mesh by a bigger angle than the bone is rotated. The other bones seem fine. There are a lot of modifiers on the object but when I deleted them all I still had this problem. I also have a python script that runs automatically in the file, but it is a simple function used for drivers.
shoulder_test_20190925.blend (1.1 MB) 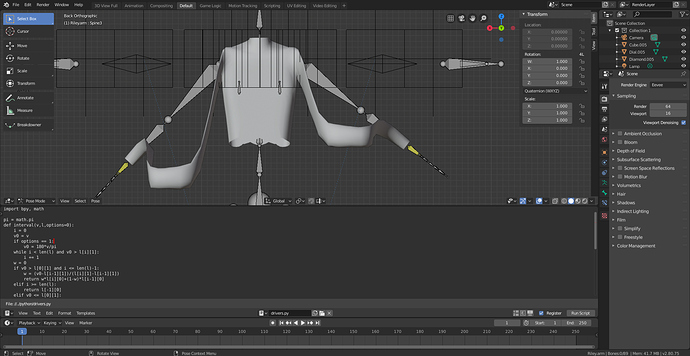 If you delete the drivers, the problem goes away. Guess they’re not so simple. (and reset the pose, since your shoulders are aimed diametrically opposite where they should be.)

If you deleted the modifiers, upload the version with the deleted modifiers. We want to see the simplified problem. We don’t want to delete four thousand modifiers to simplify the problem. For next time.

I guess I’m going to have to redesign my rig so that there would be separate bones to rotate for FK, then put a copy rotation constraint on the arm bones to copy the control bones. If I make the top spine bone the parent of the upper arm control bone, then the shoulder would still depend on it but it would not depend on the shoulder.

Something I’m not sure about is if I should leave the IK chain how it is, or if I should make a separate chain for the IK bones.

The shoulder bone only depends on the upper arm’s own rotation value (and not what the upper bone inherits from the shoulder) so I don’t think the cycle is really dependent.

That means that, yes, if you separated out the IK to an independent structure, you could find a way to make that work for FK. But for FK only. It’s never going to work for IK.

Not that that’s necessarily the problem. I personally draw the line at debugging other people’s drivers, so I haven’t inspected beyond what I needed to discover that, yup, the drivers are involved in the problem.

I found this page https://blender.stackexchange.com/questions/65849/shoulder-movement-following-the-arm which has an animation showing how the shoulder should lift has the arm lifts over the head. This is the purpose of the drivers on the shoulder. Somone has a suggestion of how to solve it, but other commenters say it creates a dependency cycle. Another commenter says there is no clean way to automate shoulder rotation in Blender.

In any case, could anyone tell me how they handle the shoulder rotation while the arm lifts over the head, or does anyone have an suggestions as to how I could handle it?

I haven’t come up with a perfect solution yet myself.

Here’s what I’ve been doing: 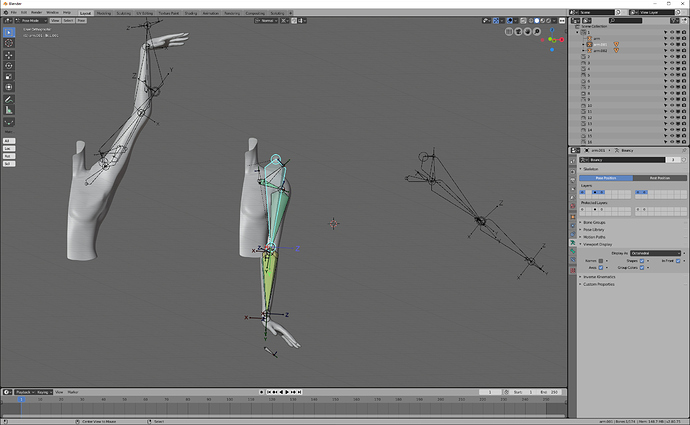 Rather than trying to do it with a three bone IK, or do gymnastics to aim the clavicle properly prior to IK evaluation, I track a non-deforming, two-bone IK chain with shoulder + arm bones. The origin of the chain ensures that the point that the clavicle will track will rise above the level of the shoulder with less rotation than it would take to rise below the level of the shoulder (and tracks the elbow for world Z rotation.)

Then, yes, you need another laer, because clavicles aren’t fully determined by the position of the spine and the elbow-- there’s freedom of motion there.

This isn’t perfect. It’s good enough for me and not too much work.

Thanks for the response but I don’t understand. Which bone(s) should have the ‘Track To’ constraint? Should the IK chain include a shoulder bone?

My modifications in the attachment are only on the left side of the armature. The right side is still rigged the way I originally rigged it.
rig_20191013.blend (4.0 MB)

The Ik chain being tracked (not with a track-to) is only two bones. The first bone in the chain is a sort of should and arm combined into one.

The shoulder bone tracks a marker bone that is parented to IK1 via a damped track constraint.

With a little more play after writing that, I found that actually running the IK twice works a bit better than that, though. First I run the IK to get a proper-ish position of the shoulder bone, then I run it again (with a pole target parented to IK1) to get proper positions for the upper and lower arm from the position I figured for the clavicle.