Armature not following it's parent object?

EDIT: To be more clear, it follows, but the child object is off slightly.

I’m trying to parent my armature and character model to another object (the motion/collision bounds object)
but when moving around inside the game engine, the character & armature don’t move accordingly.

When facing the Y axis, the player is positioned perfectly, but rotating 90deg either direction
ends up with the character being slightly off-center. 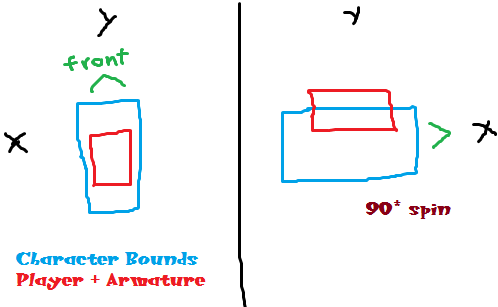 Pretty big deal being the character is supposed to be sitting down with their hands on the handlebars - ends up looking
like theyre floating next to the mount.

Tried un-doing the parent and trying again, but the results are even worse. The armature and mesh end up a few dozen meters away. No idea why this is happening, any suggestions?

[Also, this is in regards to the BGMC - Not putting ‘BGMC’ in the title box though]

Maybe try applying the scale and rotation? Can you replicate the problem in another .blend?

Press any key to make the blue box spin, you’ll see the character orbit around it instead of staying on.

@Thatimster was right, select the blue box and apply scale(CTRL+A) should fix it