i’m trying to repeat an objct along a curve with minimum distorison on the object
but having someproblems to redo it !

is there any specific requirements for teh curves points of qty of point?

i tried with a cube and at some location along the curve there is very strong distorsion!

any idea how to correct this effect and how to make the object follow along the curve with no offset?

don’t know but the Alt S did not work i had to use the menu one from objecct menu to clear that !

here is the file check out the one with the bullet
don’t know it’s refusing t follow the curve
what did i miss here !

so simple and it won’t do it witht eh bullet

the one on the right with teh cube seems to follow but the cube must be smaller then the curvature radius it hink or it will be distorted a lot !

just tried something else

seems that the object should be at origin is it possible !
that would like duplivert or face or for particules object !

mind the cube is not at the origin and seem to follow the curve ok but still with an offset !

Bezier Curve with large slope seems to be the problem. If you subdevide the curve many times, there will be lot more points with small slopes. But the end vertexes on the curve still look wired. I erased it. Than it seems to work ok. Here I have about 3 shells between each curve vertex. 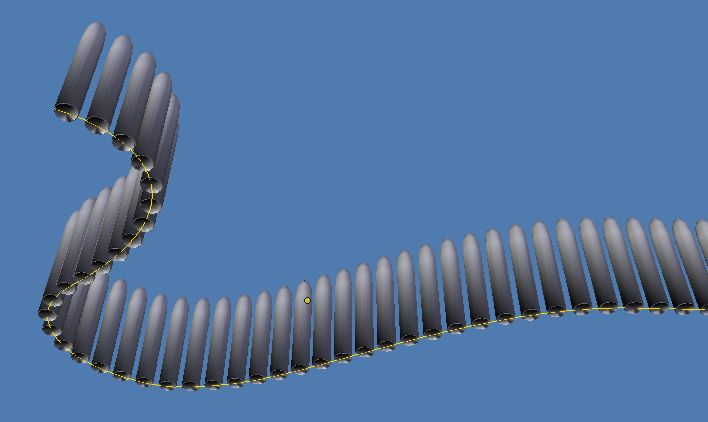 but what do you mean by
verteces on the curve still look wired ?

it’s very strange that it works fine or almost fine with teh cube but not with the bullet!
any idea why ?

is it important to work with bezier or poly line
cause i prefer poly line instead of bezier !

Oh well its still deforming no matter what. With cylinders if you keep the array on the curve and don’t make sharp turns, appearance of deformation is minimal. Curved array is not treating object as rigid meshes. Only way to get around this is to array an invisible object, than link ditto object to those invisible objects. I tried Empty but you can’t array Empty. Also duplicate function in Blender really doesn’t create dittos.

may be you can array a vertex then apply dupli vert !