(Screenshots are at the bottom of the page)
Hey guys, so this is sort of a revival of a game that I started when I had just began learning BGE (fitting, because Resurgum is Latin for Revival). The following is the basic plot that viewers need to know before actual work begins. I am just a prop and environment artist for this. And writing the story, obviously.

Lux is a man who understands loss. Five years he had lost his whole family to a vicious murderer. When that happened he lost a large part of him. He moved from the small town that he lived in and town a job as a farmhand and general smith for a large, wealthy family. How they became wealthy is a mystery. The family is not noble and they do little work. Some say magic, but there hasn’t been talk of the use of magic for hundreds of years, not since the times of Arvania the great.
Five years after the murder of Lux’s family, another murder occurred. The victims were the entire family that Lux worked for. He came in one day from bartering in town to find their bodies laid out in a precise pattern. This pattern was familiar to Lux, for his family’s corpses were laid exactly the same. Lux realized that this is no coincidence and decided to start looking for the murderer in order to bring vengeance to his family and the family he worked for.
After a long while on the journey, Lux discovers that both is wife and the family that he worked for were descendents of two of the great mages from a millennia ago. He also discovers that the name of the murderer is Grimaldis. Grim is also a descendant of one of the great mages, and Lux is as well. It is unclear if Grim is a descendent of Ulric, the dark mage who tried to take over the world, or Arvania the Great, who was the only mage left alive after battling Ulric and his followers.

NOTE The story is still a work in progress. More than likely things such as names will change.

And now just some screens of my most recent props. I know they aren’t that great, but I feel as if I am steadily improving. So please leave all hate at the door. Constructive crits are welcome though.

You should work on a better texture for the grass, and the roof. Those would help. Like you I’m working with environment, but I’m best when it comes to supplying sound. I bought an entire sound kit, and I have 2 or 3 music programs. So it wouldn’t be hard for me. I’m still working on my ability to model though. Not my best area, my hand art is very good, but I don’t have a tablet, so… Sound and SFX sound good to me.

Oh, and exactly how many levels/boards/scenes or whatever are there? I love your idea!

I guess it would help people who want to join if I put more details about the tech side of things. Haha. I was actually thinking of having it kinda set up like Fable is. Where you divide a large game world into multiple scenes. Like each town would be a scene, the open world from one town to another would be a scene, each section the player is able to explore would be a scene. The reason for this is because I want the game to be a non-linear action RPG. Hope this helps. (:

What kind of sounds do you do? Because if you are interested, I would love to have you aboard.

I know the textures aren’t that great. I am still learning how to properly texture and whatnot. These are kinda like the pre-alpha props for testing and quite possibly for a tech demo type thing for people interested in testing the game/scene out.

Yeah I understand texture may seem easy at first but their not a walk in the park. I like doing swords, and weapon sounds. I actually can do a lot of other stuff too, but those are my favorite, and I love fable rpg’s.

Fable had a STRONG influence on me when I first played it. And the only other game’s story that has stuck with me like the first fable did is the first Mass Effect. Those two games are the reasons why I got into game design. If and when this project takes off, I would love to have you as a sfx artist, if you are interested of course.

Of course I’d love to. What better way to spend the summer that helping others? After all, I technically have nothing better to do than sit on the computer all day. So when I get better, I could try, and I mean try and model a character. (I’m horrid at it right now.)

Hahaha. I am too. I tried to block out a character and messed that up. Idk how, but i did. I will probably try a bunch of tutorials to get better at it. But yeah, great to have you aboard. Ill update the top post when i am on a computer. I will also try to get more of the story to you tonight.

I congratulate you for actually posting some screenshots of your work.

Most people just don’t get that you need some screens to convince people that they should help you. Good luck on your project!

Thanks Dhaher. I almost left them out because they are not up to par with what I want for this game, but then I looked at it from a reader’s perspective. Why would they look at that wall of text if there wasn’t a treat (although a kind of mediocre one) waiting at the bottom. So, although the screens weren’t the best, it actually got people to view the thread and think about it. Any crits on how I can improve my work? Besides the texturing? I am not that great yet. But I feel like I did a pretty good job for beginning work. Again, thanks.

@ Josh Good start,but you need to push it further

Since you haven’t showed more work I’m forced to just comment what is seen. Lowpoly modeling- seems ok but yeah,textures will make it stand out more. I don’t know what you use, Gimp or Photoshop, but you need to search the net for how to make seamless textures tutorials. The roof,the stones on the first floor and the grass are too obviously tiled. Beside learning how to make textures seamless one easy tip is to first find the suitable texture. This means it should be “even”…no ligth,no dark spots. No destinct forms that the eye can later see as repetitive. The house’s second floor texture should be changed. I know you said you’re still learning and hope to take my words for what they are- constructive crit

On the other hand I like the stalls.Only crit on them- too clean. Check pictures of aging wood,dirty cloth and such. On second glance…the house is out of proportion somehow…the floor’s heights doesn’t seem right,but that may be of the textures illusion.The hanging sigh could be larger,but that’s minor. Continue work and show us more

Most of what you said, I knew about. I am so bad at textures. I can do enough to make stuff look like what I want it to, but not good enough to make it look good. Haha
I need to follow a bunch of tutorials on everything and just keep working at it. That house wasn’t that long and I didn’t do proper proportions. that whole scene is not proportioned right. I am reworking everything. And I have decided that the wood on the stalls are way too glossy. I think the texture I used might have been from a table or something. I am going to retexture them and see what I can come up with. Thanks for the crits though. (:

Are your textures on the house seamless?

They are. But they have a side with lots of ends so it makes it look tiled. I need to work on it. I was trying to improve on texturing so I decided to try a crate because it is easier to texture and makes sense with the game. So, does it look better than my other stuff? 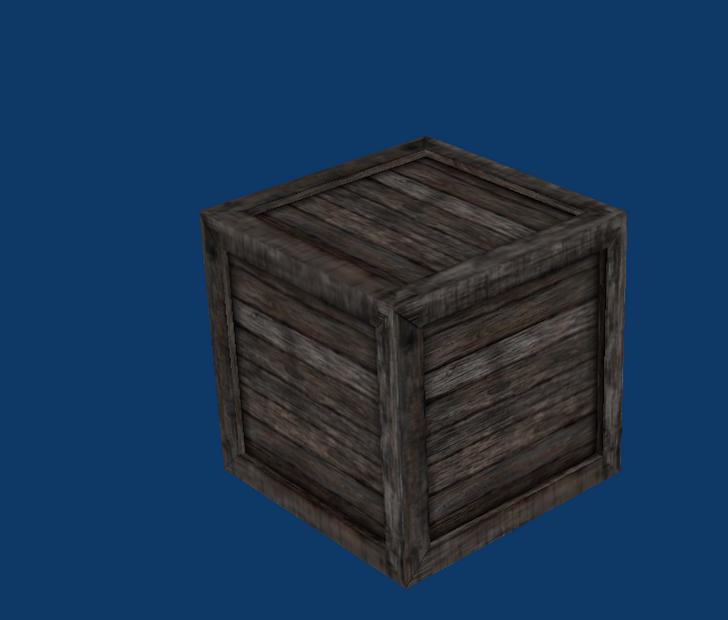 Also, does anyone know of a good sword tutorial? I can make the blade no problem, but I struggle with the hilt. Should I model them separately and then join them? or should it all be a single object from start to finish?

Ah, the crate. Classic. It’s actually really well-textured. I like it.

The crate. You can’t really have a cliche-filled action-rpg without. it.

Thank you for the positive comment. I tried making the less cliche barrel but it ended up appearing rather flat. I will try again tonight though. Do you know of any good sword modelling tutorials?

Sorry, no, I don’t. A sword isn’t that hard, though - it’s a fairly simple shape. Do you have concept sketches for one? Here’s a nice one I found with Google. 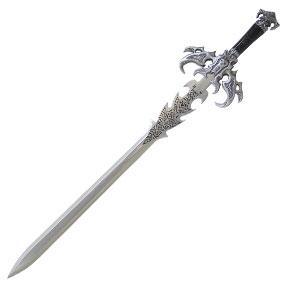 By the way, that’s from swordssource.com. Perhaps that would be a nice site to bookmark…

I actually took a look at the site and it is pretty cool but doesn’t have that much reference images. I don’t have any concept art because I am a horrible artist and do not have a concept artist for this yet.

Hey if you still need some help, I would really like to work on this with you.Not real good with characters but have a few tricks up my sleve.I can do animation and like doing props and textureing.Heavey on the props light on the textureing.I know absolutely nothing about games but would like to learn.
Let me know if I can help
Thanks
Lalen